Robert Wilson, the experimental theater director, playwright, and artist, first met Pierre Bergé, the businessman who co-founded Yves Saint Laurent and was the designer’s partner in love and in life in 1971. Wilson was in Paris to stage Deafman Glance—a seven-hour-long play about a deaf boy named Raymond Andrews, whom Wilson eventually adopted, acted without any words—at the Théâtre de la Musique. Bergé would attend the play, not just once, but two or three times, staying the full duration each time. That meeting was the beginning of a friendship—and an artist-patron relationship that would span five decades until Bergé’s death last September.

Bergé supported Wilson and his projects, and on July 28, the multi hyphenate paid tribute to the late businessman at the 25th Annual Watermill Center Summer Benefit & Auction in Water Mill, New York. Bergé even saved The Watermill Center before it opened in 1990. “I was about to lose it because I needed moneys to make the final payment, and if I didn’t I would lose money I had invested, and he said, ‘No problem, I will help you,’ so he was the first major supporter of the Watermill Center, and that’s why I want to honor him Saturday night for our 25th Anniversary Gala,” explained Wilson, who recounted his memories of the late Yves Saint Laurent co-founder to Document Journal:

Pierre has been one of my biggest supporters since the early 70s. He was a very close friend. Pierre was a rare individual who understood art and business. Having produced Einstein on the Beach, I was bankrupt, I had owed $80,000, and I asked Pierre for advice: whether to declare bankruptcy or honor the debt. I was thinking about declaring bankruptcy. He said “Don’t declare bankruptcy, honor the debt and ask for time to repay them.” Which I did over time. He understood business and art like no one else.

Wilson on the Time Bergé Introduced Him to French president François Mitterand:
He was very good friends with Mitterand, so they were opening the Opera Bastille, and he asked me to meet with Mitterand, we were in Strasbourg, and we flew in his private plane with the president to Paris, and Mitterand said I need to have an event in the Opera Bastille, but it’s not finished, and we’ve invited 80 heads of state – Ms. Thatcher, Gorbachev, all of the people that time, and it was an economic conference, and he said, ‘I’m very embarrassed because the opera house is not finished, and it will be eight months before we can open it to the public,’ but he said, ‘Do you think we could do something anyway?’

Wilson on the Evening He Staged the 1989 Opera Bastille Performance of “The Night Before The Day”:
I called it the Night Before the Day, and it was only that one event that only happened once, and we had all the superstars, Domingo, and all the singers, and Pierre worked with me and we got all the designers to do the clothes for women — we had Yves [Saint Laurent] and all the big designers that did clothes — and I only had French music, and I designed sets, and each singer had its own setting. It was about love, it was all different scenes of love, and it was all French music. I did “Alceste” by Gluck, Shirley Verrett sang “Alceste”, so from older music to contemporary music.

We had to start letting people in at 4:30 in the afternoon because of security and because the building really wasn’t finished, etc., and then the performance started at 7:30 pm or 8 pm then there was a dinner at Versailles afterwards, and the dinner was over at 1am, and what was amazing was that both Mitterand and Pierre, wrote a letter after the performance, in the early the morning, thanking me, so that’s 17th-century discipline – handwritten notes — and hand delivered to the two-star hotel where I was staying in back of the Bastille. 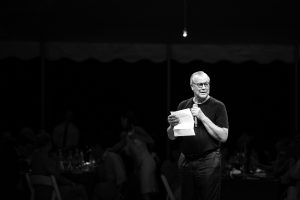