Did the "Demna Effect" cause the fashion world to put an international spotlight on Georgia?

Why is fashion so fascinated with Georgia? The former Soviet republic has been getting a lot of attention in recent years due to the likes Demna Gvasalia and David Koma breaking out in the international fashion circles. Just three years ago, the Mercedes-Benz Fashion Week Tbilisi began to give Georgian designers platform for foreign press and buyers to travel to Georgia to see the creative energy there with their own eyes. Then last week, the country made an appearance at Pitti Uomo as the tradeshow’s guest nation, spotlighting six Georgian labels: Aznauri, Anuka Keburia, Gola Damian, Situationist, Tatuna Nikolaishvili and Vaska.

Most of the designers cited Demna Gvasalia as the reason why the rest of the fashion world started paying attention to Georgia, but, although the Zurich-based Vetements and Balenciaga designer was born in Georgia, he left with his family to Düsseldorf, Germany in his late teens after years of civil unrest. David Koma, the former artistic designer of Mugler who also has an eponymous label, decamped from Tbilisi with his parents to St. Petersburg before relocating to London. “The first one was, of course, Demna Gvasalia with Balenciaga, but people began to get interested in the other designers in Georgia because they wanted to know what’s happening in this country,” said Louis Chasserot, the right hand of Irakli Rusadze, the Georgian designer behind the Situationist and Aznauri.

According to Chasserot the creative energy in Tbilisi can be traced, in part, to Georgia’s transition from communism to democracy in 1991. “Georgia is building itself now because it was destroyed some time ago, really not long time ago, and now it begins to reconstruct for culture, for art, for design, for economy, for all that kind of things,” he said.  It’s this post-Soviet wave  which many in the media use to describe the broader influences on designers like Gosha Rubchinskiy. Yet, some of this Goergian cohort, Chasserot was clear to point out, wish to distance themselves from the adjective. “We try to get out of this post-Soviet trend that appeared with Gosha and all of that. During Tbilisi fashion week the main word was “post Soviet aesthetic,” and now we try to get out of post-Soviet and say ‘No, Georgia is also about Georgia, and not only the past of Georgia.’ Now the artists, the designers—all these people —they are getting inspired by Georgia, and Georgian culture, and not by the Communism, the Soviet time and all this,” said Chasserot.

So, aside from the success of Gvasalia and “The Demna Effect,” what else makes Georgian fashion stand out? Roma Photilza, the manager of Vaska, a label that strives to use organic and vintage textiles in its collection points to a longer Georgian tradition of crafting garments.  “We have a unique vintage, and fabrics, and hand-stitched fabrics, and it’s very beautiful and very useful,” she said. For Tatuna Nikolaishvili, a young Tbilisi-based designer, these traditional garments make repeat appearances  in her collections. In David Koma’s fall 2017 collection, you can find an updated version of the Chokha, a traditional wool coat with holsters for bullets and gunpowder at the front. But, as Chasserot emphasized, many of these designers insist that the world look towards the unseen possibilities of Georgian design, not the post-Soviet influences or the traditions of the days gone by. “Georgia is also interesting for what it is now,” he said, “and not for what it has been in the past.” 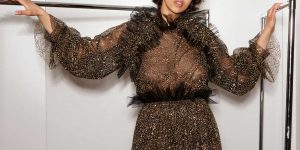