The vibrant photographer reveals his maniacal love of football just in time for the 2018 World Cup with a new exhibition at the Garage Museum of Contemporary Art in Moscow.

As we speak, the majority of the world is gathered in front of televisions on couches, chairs, stools, losing its collective mind over the greatest sporting event to ever be conceived. German photographer, and football fanatic, Juergen Teller has a phrase for this sensation: Zittern auf dem Sofa, or “trembling on the sofa.” It’s the title of a new exhibition of photographs by the iconic fashion photographer that serves as a tribute to the mania and obsession the sport exerts on humans, particularly Teller, around the globe. Document has exclusive images of the exhibit, on view through August 19 at the Garage Museum of Contemporary Art in Moscow, as the 2018 World Cup is in its first week of global trembling.

There is a feeling of joy that permeates the photos in the exhibit, seen in one image of Teller screaming as Bayern Munich defeated Schalke 4 to win Germany’s Bundesliga championship in 2018—the club’s sixth consecutive title. Teller is clearly elated as he is drenched with a mysterious orange liquid — Lucozade? Gatorade? In another frame, he’s wearing a grey t-shirt, and in the next, the shirt comes off, leaving Teller only with his soaked orange shorts. The exhibition also features photographs of German footballers Thomas Müller, Toni Kroos, Mats Hummels, Leroy Sane and Joachim Low. Actress Charlotte Rampling takes on the role of goalkeeper on an askew field warped to Teller’s signature style. In addition to football-related photographs, the exhibition also highlights the non-football aspects of Teller’s universe.

With pure joy comes, camaraderie, like the kind Teller experienced watching Germany as a boy. “When I was 10, in 1974, I watched Germany defeat Holland in the World Cup 2-1,” said Teller. “It was amazing. The World Cup was in Germany and the whole nation was watching the television with me. That feeling would then follow me whenever Germany would win.” His self-proclaimed “unhealthy obsession” started then, as a child in Bavaria, Germany, where he grew up watching the sport with his family. The game was the best means to bond with his athletically-inclined mother and, by the time Teller reached high school, he would go on to become team captain. “Football has always been a part of my life,” said Teller. “Even as a child, before language, I remember being hypnotized by the ball rolling across the grass, chasing it.”

For Teller, football also held the power to refract the darker sides of life. The images of his wild eyes during a victory or defeat remind the photographer of the turbulent relationship with his strict and abusive father, Walter Teller, who did not think much of the game. A provocative 2003 black-and-white self-portrait of Teller shows the photographer standing naked at his father’s grave, guzzling a beer

In 2002, Teller would then go on make football a part of his practice by filming himself as he watched games. The fruition of that series would go on to become Naked on the Soccer Field. “The first time I taped myself watching football, as art, was 2002,” recalled Teller. “The piece was called Don’t Suffer Too Much, because, as you’ll recall, Germany lost to Brazil. The match was in Japan, so it was around lunchtime in England. I watched the damn game with just me and a video guy, with cigarettes and beers, and we lost. It was so depressing. Afterwards, I couldn’t watch the film, because it was hard to see who I became, screaming at the television. Nothing was staged or acted. I was out of control and I was furious.”

For the Garage exhibition, Teller plans on filming himself during each match Germany plays during the 2018 World Cup. At the exhibit, a number of televisions have been installed, enough screens to correspond with the number of matches German would play should they make it to the World Cup Final. After each match, the screens will slowly fill, playing footage of Teller’s latest filmed match reactions. Should Germany drop out before the final? Only static will fill the screens.

At the end of it all, sports make equals of everyone who isn’t an athlete. Viewers, no matter their status in the world, occupy the same level playing field: that of the fans. And its precisely that label, Teller bears most loudly. “Footballers really are modern-day gladiators when you see them in their stadiums,” said Teller. “I love photographing them because they don’t give a shit who I am. Unlike fashion or film celebrities they just don’t need to be photographed in the same way, you know? That makes it a different experience for me.” 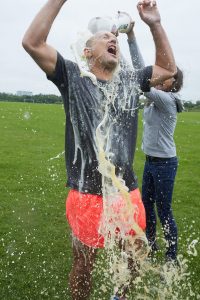 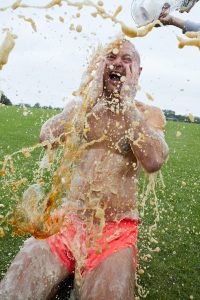 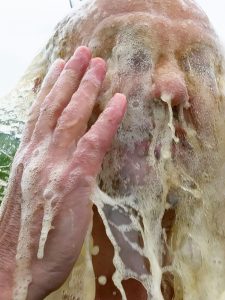 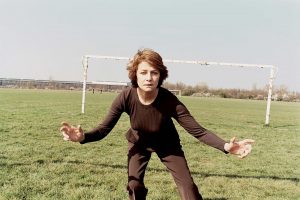 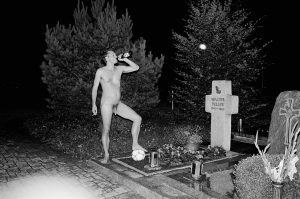 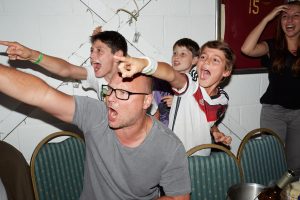 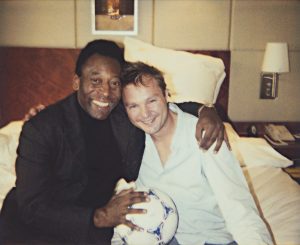