Johann Wolfgang Goethe’s 1809 novel Elective Affinities, about an aristocratic couple exploring the roles and results of fate and choice in life, serves as a reference point for a new group exhibition of the same name open this week at two galleries in Austria, Zurndorf’s Sammlung Friedrichshof and Vienna’s Stadtraum. Curators Denise Wendel-Poray and Hubert Klocker applied Goethe’s idea of the relationship between people as simple chemical reactions to portraiture, examining the rapport between the artist and the subject. Ellen Berkenblit, Lea Draeger, Sofia Goscinski, Sandro Kopp, Jonathan Meese, Bjarne Melgaard, Bjørn Melhus, Otto Muehl, Sabine Pigalle, Iris Schomaker, Spencer Sweeney, and Erwin Wurm are the artists in the exhibition, and, according to the curators, “Together, these works form an odd, off-kilter group of relations.”

Kopp contributed a selection of portraits of his close friends and family that he painted over months and years, including their hair, so that the portrait represents more than just the sitter’s image, but also their actual physicality. “All the works I am including are in a way an exploration of my general reactions against the current flashy, immediate, forgotten-in-seconds, impersonal media culture,” said Kopp. “On the one hand an about-face from the Skype portraits I was doing, on the other, a deepening of the the same themes I was looking at with that series: the ephemerality of a person’s mediated presence and a dialogue with classical painting traditions. This new work is a celebration of human connection and interaction through art.” 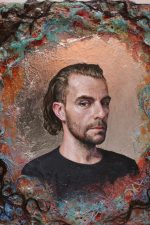 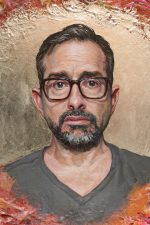 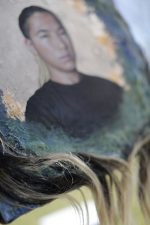 Melgaard found inspiration from the French filmmaker Catherine Breillat to create portraits in collaboration with hair artist Bob Recine and designer André Walker. Primarily yellow and adorned with curly hair, the figures in the painting look as if they came from a cartoonish fantasy world. Aqua tresses decorate a sculpture by Melgaard that looks like an explosion of blue. By contrast Schomaker’s calm, faceless portrait depicts a person in a yellow and white striped dress evokes a  more subdued energy.

“Like Goethe’s human experiment in Elective Affinities, the following show explores the mysterious balance of chance and choice that engendered these works and invites the viewer to contemplate their paradoxical logic as a group as well as his or her ‘affinity’ to them,” explain the curators. 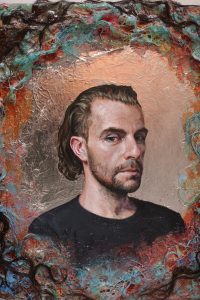 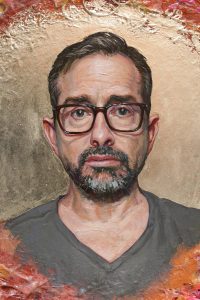 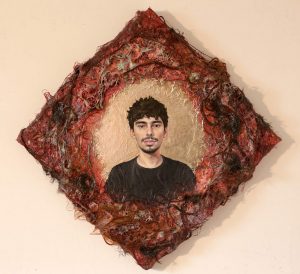 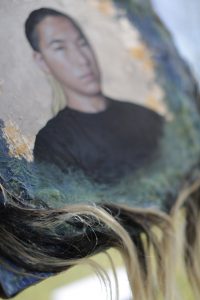 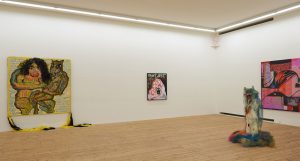