The hairstylist discusses his embrace of creative spontaneity, the importance of positive collaborations, and why he doesn't search for inspiration in books.

For the past decade, there’s been a movement across the fashion industry to move away from the staid and, sometimes, toxic cultures that surround the personalities in the industry, as well as the often hegemonic, white-washed, and damaging standards equated with “beauty.” Working admirably amidst this slow transition has been the hairstylist Eugene Souleiman, who once swore off Milan fashion week due to its flaring egos and one-size-fits all modus operandi to hair. However, as of late, Souleiman has found a wonderfully creative coupling in the form of Lucie and Luke Meier, the recently-installed creative directors of Jil Sander. The success of this collaboration have brought the 56-year-old hairstylist back to the Italian fashion capitol he once renounced thanks to the Meier’s unpretentious ethic and fluid creative practice. Document was able to catch up with Souleiman to discuss his work on the Jil Sander Fall 2018 collection, the importance of creative versatility, and why he isn’t looking for inspiration in dusty archives.

Phil Backes—Hope you’re finally catching your breath now that fashion month is over! The Jil Sander show was beautiful—sci-fi to be sure, but not strictly so. How did you come up with those hairstyles?

Eugene Souleiman—I thought the girls looked really quite amazing. They looked really polished, but polished in a cool way. They had a lot of character to them. I mean, it was quite sharp, but at the same time they had an otherworldly kind of beauty. I don’t know if you’ve seen the new Blade Runner film?

Phil—I actually have yet to see it…

Eugene—There’s a part where, what’s called a replicant bonds with a human being, and they’re caught between two kinds of worlds—they’re in this transient place. I told Luke and Lucie that I quite like the fact that they’re kind of in this place that is not really a place. They’re moving between two worlds. I thought that the braids, which is something for me, that is quite a classic thing to do—because I am known for the braids that I do at shows. But I wanted to also do something that felt very polished and very sharp; something that felt as if there was a tension in the hair, that had lightness and abstraction in a beautiful way. 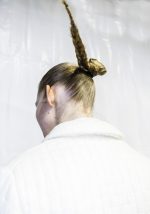 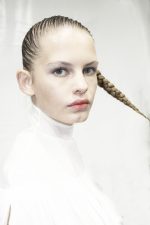 Phil—At the end of the braids you do start to see more and more of the hair-ends sticking out, whereas the classic form would be to to have everything as perfectly in place as possible.

Eugene—Yeah, gradually everything fell apart, right? It defied gravity. I won’t say the word poetic, but there was an ethereal beauty to it at the same time, although it still felt very modern.

Phil—Was this a feeling you got from working with Lucie and Luke at fittings and when were planning your approach?

Eugene—At the end of the day, for me, I find working with them to be quite easy. I understand their process. It felt quite natural. It didn’t feel like I went in there and was just a pair of hands. I think for me if you have that connection with a designer and a stylist, it’s quite special. I can name only a few designers that I work for where there is that real connection, where I totally understand where they are coming from, and I understand what they are going for. It’s a joy—it’s not a labored experience with a tense atmosphere. It’s a much more a respectful environment where there’s a flow to what we do. 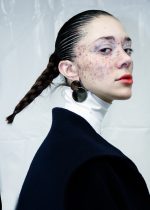 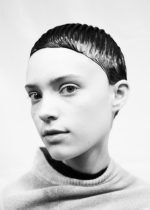 Phil—Hair, by its very nature, is an ephemeral medium to work in, while most art possess a permanence: You put the paint down, you take a picture. It’s going to be there for awhile. How does this difference guide your creative approach?

Eugene—For me, I always start with a very clear, clean head. I have no preconceptions. I’m really quite flexible actually when I work. I don’t think, “Oh, is this a trend? What’s the new trend?” I don’t think in terms of that. I’m very hands-on and specific in the fact that I want to do something that works really well and that everyone loves. The other thing is that I’m quite respectful of models. I want them to be feeling incredible. I want the girls to feel beautiful. I’m really not into torturing them at all. I just want to have fun with the work and really enjoy the process because I think the process plays such a huge part in the outcome of a show.

Phil—What, if anything, do you turn to for inspiration when heading into fashion month?

Eugene—I never really think about it in that sense. I’m constantly thinking even when I’m not working. I’m always engaging with life. I find life interesting. I love looking at people and I love going to movies. But I think I just work in a very intuitive way, and I take a lot of information in without processing it in a conscious way.

Eugene—Yeah, I would never dream of grabbing a book of some Czechoslovakian photographer that no one’s ever heard of and using that as inspiration. I don’t work that way at all. I guess I’m an old art student—which I was before I was a hairdresser—so my references are much broader in that sense. They’re not in fashion—they’re in media. They’re what I see around me. They are things that I’m attracted to. They can come from anywhere really. The inspiration for the Jil Sander show came from Luke and Lucie, and also Sarah [Richardson]. They’re inspiring people. And I’m very happy to be working with people like that.

Phil—It’s amazing what having a good, collaborative team around you can do to cultivate creativity.

Eugene—If you don’t get on with who you’re working with, you can’t do a great job for them. You need to choose with the hair as well. Sometimes, not doing something to the hair is just as good as actually doing something. There’s no right way and there’s no wrong way. There’s a place where you end up being happy with what you’ve done. I’ve done shows in the past and I’ve been like: “Let’s just wash the hair and let it dry naturally because it’s going to look really beautiful.” There are many ways of approaching something and as a hair dresser I have to acknowledge all of those routes that are open to me. Simply washing hair can look fantastic, as well as doing that really linear sci-fi slicked-back hair with a samurai knot and a broken braid. At the end of the day it’s just a collaborative process. If we’re all on the same page and we’re all aligned with what we’ve been given then you have something quite magical. 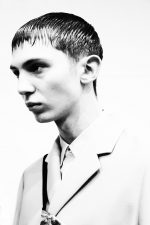 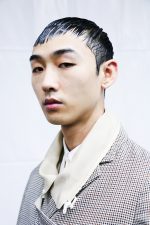 Phil—Absolutely. I love that there seemed to be just as much attention put on the men, which often times, from a beauty perspective, are given this very traditional look.

Eugene—I love the fact that the guys were also treated, it wasn’t like we did nothing to them. We cut their hair, put in gel, and made it really slick. I found the models inspiring. I thought the casting of it was fantastic. That’s really important, to have great casting.

Phil—It’s something rare to have a point of  view where models are more than just walking mannequins. There’s so much personality in all of these models.

Eugene—I think that’s really quite fantastic. I first started out doing shows, and we wanted everyone to look the same. You would have 25 girls that looked really amazing and then 20 that didn’t look right at all. With the Jil Sander show, we found a technique and a visual that could be adapted and tailored to everyone in the show. That can be quite tricky. Now, quite rightly so, there are a lot of different cultures represented by the models in the show, which I think is really important. As a hairdresser that is probably the toughest thing because you have to make it work with different cultures of women and men, while still keeping that same spirit. Pulling it off, you really feel like you’ve done something and you think it’s really great that no one in the show feels weak and nothing feels wrong. Everyone feels right. You actually felt like they were people that were extraordinarily beautiful, and very stylish, and that had really great taste.

Phil—That should be the end goal of fashion and beauty in general, I think.

Eugene—Yeah, I think that’s a very positive outlook. You’re not saying, “You need to look like this to be fashionable. You need to have this length of hair. You need to be this size.” There were different sized models there as well, which I thought was really great. That’s really how it should be. Fashion shouldn’t alienate people, it should excite them. It’s not like there was a diverse cast and people thought: “Oh they look great just like that, we’re not going to do anything to them.” That to me is just lazy. [Laughs] Instead, we said, “We have a diverse cast, how can we bring them into this world? How can we really make them fit into this place?” 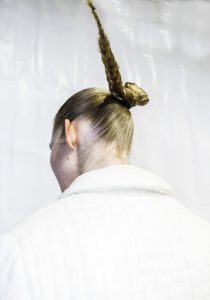 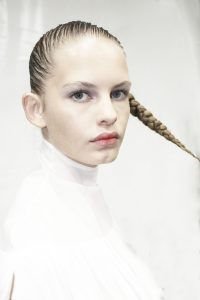 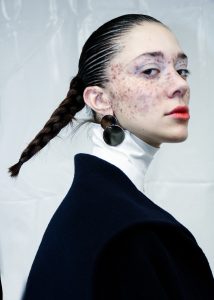 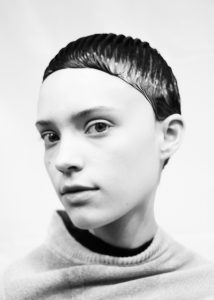 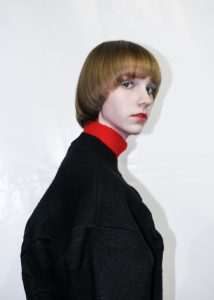 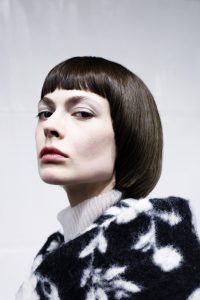 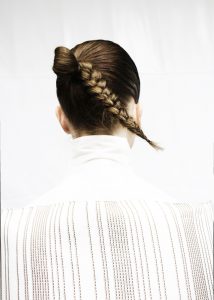 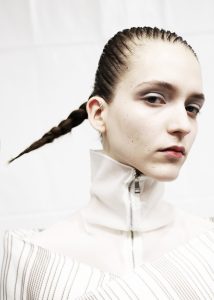 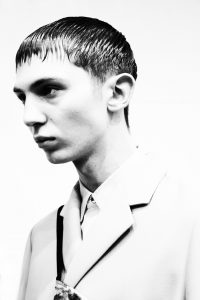 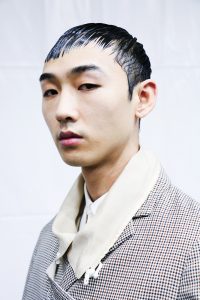 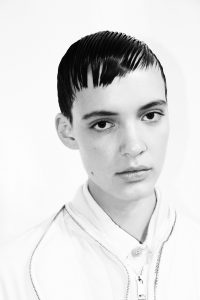