In the first research of its kind, a new study reveals how technology doesn’t have to replace humans like-for-like in order to significantly impact the way we work. Released by the Center for an Urban Future, this week, the study analyzed 800 different jobs throughout New York to calculate what aspects of each role could be replaced by machines. While the findings don’t suggest that you’ll be sacked to make room for a machine, they’re hardly more encouraging. Automation has the potential to cut New Yorker’s salaries by one-third, or the equivalent of $92 billion in wages.

The report wasn’t designed to preempt mass redundancies but for policymakers to think about how to future-proof industries. Highlighting the New York’s subtle shift towards automation has been one focus of the Center’s Middle Class Jobs Project, who note that the city has a lower automation potential than the rest of the country, where a staggering 51 percent of jobs are under threat due to algorithms. As of today, one-in-ten jobs in the city could, hypothetically, be replaced by automation. Of those, some 7,000 jobs face the possibility of being replaced outright.

But automation isn’t just about cutting pay checks and getting rid of expensive employees. In some industries, it has the potential to reduce errors and improve quality and speed, such as in the fast food sector.  Approximately 50,000 of the city’s fast food service jobs can be fully automated, which is on par with the 55,000 bookkeeping and accounting clerks whose work could just as easily be done by machines.

It should be noted, however, that while lower-to-middle class jobs are still considered more vulnerable than senior roles that tend to require a greater cognitive skillset, top-level jobs are far from safe. What was originally thought of as a scourge of administrative and service industry roles, the capabilities of computers are closely catching up with senior roles. According to the report, one-quarter of the tasks CEOs do today could be automated. After surveying 100 of the most at-risk occupations in the city, the report suggested that 40 percent of those positions were solidly middle-class, netting between $40,000 and $80,000, with an additional eight percent earning far more than that, annually.

Time, of course, is the only thing on our side. The technology that will one day cull our job rolls isn’t exactly cheap to implement, so an automated workforce won’t materialize overnight. This will give officials a window of opportunity to respond to the coming era of employable algorithms and high-skilled software. While no one can say what, exactly, will stave off this coming tide, perhaps there will be time enough for more expansive thinking on the matter. Something that might make this dystopian trend a bit more utopia. Say, like, a universal basic income? 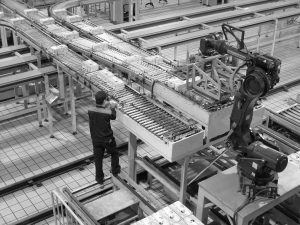