A case study of the opulent lives and expenditures of the one-percent.

What’s the currency of fame? Branding? Sexuality? The body? Youth? Photographer and documentarian Lauren Greenfield has been examining the “influence of affluence” for 25 years. With her current exhibition at the International Center of Photography entitled “Generation Wealth” she showcases a selection of photographs and screenings of her critically acclaimed films as well as her new book.

After studying at Harvard, Greenfield went on to work at National Geographic abroad—but was only traveling internationally for a short period before she realized she wanted to turn her lense towards American culture. Her early work focused on the youth of Los Angeles, a vulnerable and capitalistic culture where children “grow up fast but stay young forever.” Examining what the values of Hollywood are, Greenfield shot everyone from eight year olds staying in $3,000 per night suites after their family homes had been seized by the IRS, to a working class family who spent $16,000 on their daughter’s Quinceañera, to a 12 year old Kim Kardashian hanging out at a Calabasas party. The work highlights a lack of innocence but self-awareness.

The work as a whole doesn’t primarily focus on the 1%, instead it holds a mirror to how capitalism exploits insecurity. The values of materialism were not limited to the rich. As she puts it, “The disempowered are further disempowered by capitalism; people of color, girls, kids… Capitalism exploits imbalance and insecurity.” Greenfield photographed women and pets after facelifts, the commodification/pornification of women’s bodies through “princess” culture in eating disorder treatment centers and Disneyland, Chinese etiquette classes teaching the correct way to pronounce luxury brand names, the social mobility of Bling, barmitzvahs with go-go dancers, the son of a Hollywood agent normalizing their childhood through domesticating exotic wildlife, 6 year old pageant queens dressed as showgirls, abandoned utopian Dubai real estate developments, and three year olds at a Barneys VIP opening. The work does not come from a place of judgement as it acknowledges the capitalist structure and the subjects’ intense vulnerability.

Greenfield’s acclaimed film “Queen of Versailles” followed the story of a billionaire couple building a 90,000 square foot home, the largest house in America, and the downfall of their renovations and lifestyle after the financial crisis of 2008. At the origin of the film it was simply about the former pageant queen and the home, but by the end of the film it was described as being an “Allegory for the overreaching of America,” even mentioning star Jackie Siegel’s third breast enhancement as an expression of the overabundance of the time.

It’s hard to not imagine this work in the realm of the current political landscape, with a TV personality and mogul being elected as the world leader. With the help of the media and celebrities like Paris Hilton and Nicole Richie, a homogenization of values entered the mainstream. Wealth and the outward and lavish display of it became an admired quality. As Greenfield eloquently put it, “It’s the new Dr. in front of your name.” People were not ashamed to give access into their homes because they wanted a platform to showcase their accumulation of assets. For most, the social mobility of bling is the only social mobility in reach. The pursuit of celebrity and exclusivity became a value marketed on a global scale. 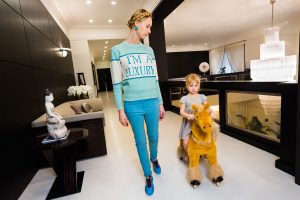 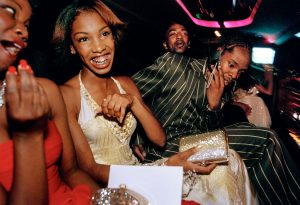 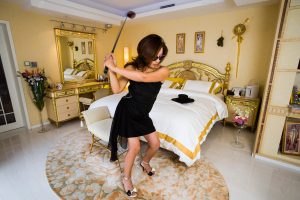 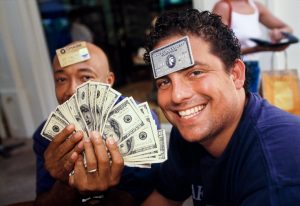 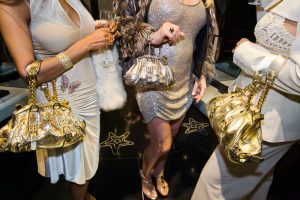