Since the 90s he has gone on to carve out a very singular voice of highly staged and carefully composed images of mediated desire. Each body of work forms a narrative series with figures that confront the world where personhood has been diffused into an insatiable will of nearly universal anomie.

His current exhibition at David Zwirner Gallery titled East of Eden explores the representations of a modern paradise lost beginning in 2008 with revelatory images of privilege and signs of loss and disillusionment in the tension between “one percent” and everyone else. This series juxtaposes a collection of idealized landscapes and deeply spectral interior spaces with lonely figures caught in the struggle of economic and personal uncertainty with an anxious sense of irony and humor. diCorcia moves seamlessly in the liminal space between high and low culture, informed by the language of television imagery, commercial photography, glamorous fashion photography, and fine art channeled through casual beauty of the everyday snapshot.

Unlike the snapshot though, his images are as highly staged as a Hitchcock film set and as carefully composed as an Edward Hopper painting. He draws inspiration from consumer imagery of late capitalism and the critique of commodification that came out of Pop Art, adding the vocabulary of darkly haunted images by Larry Clark and the erotically charged Helmut Lang fashion spreads from the 90s. Above all diCorcia is a great storyteller in his photography, with a sensitivity to the key moments of emotive expression. Leveraging the loneliness that Hopper reveals in solitary figures, diCorcia’s figures are alone even when they are in groups, often with lightening that reveals their loneliness.

His series East of Eden heightens the symbolism and phantasm of the normative family and sexuality by dismantling it into new references that remain. In one photo, Cain and Abel (2013), two men in the foreground embrace enigmatically on the bed.  It looks like a lovers embrace but it could also be father and son. This could be to congratulate a couple for their new pregnancy—the woman standing naked in the bathroom, teatering on stilettos, with pregnant stomach. The title points to the brothers who commit the original sin of murder. Among the most provocatively lit and Hitchcock-esque of the images is the nearly monochrome white photograph, Hamptons (2008), which uncovers the ultra decadence of the emperor and his new clothes with two perfectly groomed white Afghan Hounds lit by the rising sunlight flooding gazing at an all white solid lacquer finished entertainment console with the colorful image of a muscular set of bare ass cheeks mid coitus on white sheets with penetrated spread eagle in high heels and fishnets. 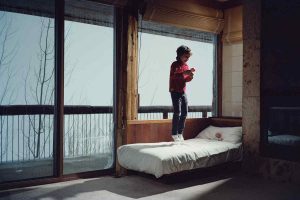 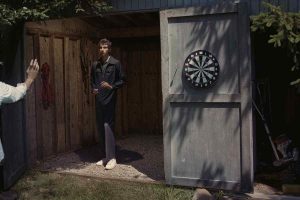 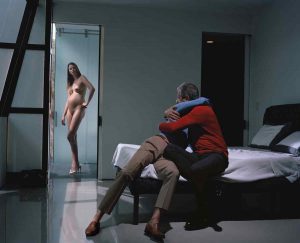 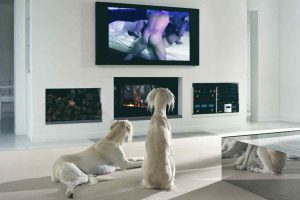 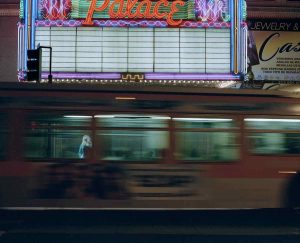