One of the most well-regarded French artists of his time staged his first state-side retrospective in 2014. A selection of these artworks featured in Document's Spring/Summer 2014 issue.

In 1947, Manhattan was coming into its own as a wellspring of new painting, with Jackson Pollock, Franz Kline, and Mark Rothko at the helm of history. That often-repeated narrative hinges on the often-overlooked reality that many important thinkers had emigrated to the United States from Europe, in the years prior to World War II. That migration helped to swing an important aesthetic pendulum from the east to the west side of the Atlantic, but many artists remained in Europe and made headway into similar methods of abstraction. This was no aping of American styles, but rather a simultaneous development, often with the same influences.

In April 2014, fittingly on both sides of the Atlantic, Dominique Lévy Gallery and Galerie Perrotin will together present the work of the most prominent member of this European set, Pierre Soulages. The esteemed French painter’s career tells the collective story of these Old World masters and their participation in the development of postwar abstraction. In 1947, Soulages was crystallizing his signature abstract styles through experimentation with the dark hues of walnut stains and fat brushes. By 1955 he had developed relationships with his colleagues in New York, leading to an extensive exhibition record in the 1960s, both in Europe and America. As his work matured, he left gesture behind and focused instead on surface texture, as seen most clearly in his solidly black paintings. He migrated toward black not for the macabre, but for its ability to reflect. The glossy surfaces present the nuanced details of raking brushstrokes but also a subtle reflection of the viewer, two ideas with which Soulages specifically, and postwar painting more generally, have continued to engage.

The dual exhibition presents the artist as he readies for the opening of Musee Soulages, in Rodez, France, and the forthcoming publication of ‘Soulages’ in America. 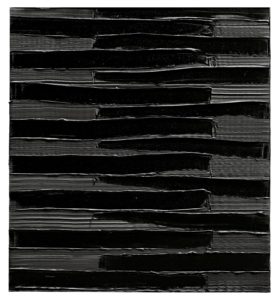 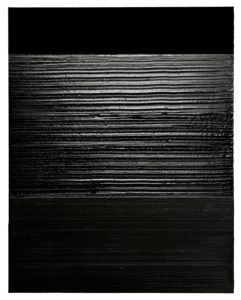 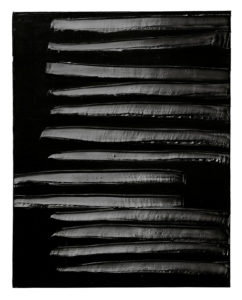