Performance artist Marie Karlberg breaks down the price of a soul

The Swedish artist discusses nightlife, discovering her darkness, and ‘going on sale’ for Document's Spring/Summer 2013 issue.

Swedish-Iraqi New York-based performance artist and host of the late night rave XTAPUSSY, Marie Karlberg knows how to throw a party. But she doesn’t end there. Karlberg sits down with the artist Desi Santiago to discuss the price of a soul.

Desi Santiago: What’s up? I tried to be a little professional and I thought up some points. I wanted to start talking about, I first met you at a party in Paris, and you squatted with blue eyebrows.

Marie Karlberg: Oh my god, I can’t believe the blue eyebrows, that’s so past.

Desi: You were part of that crew, the House of Drama.

Marie: I was living in Paris and I was completely isolated from reality. I understood the language, but not really. You know, when you live in the city and you’re not in society, you basically create your own reality. I was living with two Swedish girls and we would just go out in fur and huge platform shoes and fake eyelashes and basically looked like prostitutes. But we didn’t know if people were talking shit about us or not, which was great, because we would just continue with our look that we created. We started making videos in our small flat, we had a flat smaller than 20 square feet, it was molding. We just destroyed it with our own stuff. There was not one single space on the walls that was painted, it was just covered with stuff we were creating. Then I contacted Lionel [Bensemoun] from Le Baron and I told him I wanted to do a party and the party became a productive way for us to make more videos that we would project. I would perform at every party.

Desi: And you would make some money from it, so it was a way to finance things and have fun.

Marie: I was living cheap, and rent is not as high when you’re living in a shithole with three people. So we started doing that. And then I started having ego issues from being in a group, a collective group, that split up. Then I joined House of Drama ,but it was never my project, it was Aymeric Bergada Du Cadet’s project. But my best friend was Igor  Dewe at the time and that was after the group split, so of course they wanted us to be a part of it because we were colorful people that lived in Paris, but I actually created the performance scene before that. I was the one that started it with the three girls.

“I think about putting myself in situations where I’m going to get killed or fucked up but that I’m comfortable with. I’m a sadist and a masochist at the same time.”

Desi: What was the name again?

Marie: Dead Muse. House of Drama got inspired by that. We started doing reactionary performance but we chose nightlife instead of a gallery because that was the only place we fit into. It wasn’t like our parties were packed, but they were definitely understood by a community in Paris that galleries and stuff like that would not understand.

Desi: So those performances are violent, a sort of different energy that in a nightlife setting is synergetic with the experience.

Marie: Exactly. I think at that time I was 23 or 24 and I discovered my darkness. You know what I mean. When you discover something that you always have, maybe I was a late bloomer, I couldn’t pinpoint down depression. When I discovered my darkness, I just wanted to swim in it, it was like water for me. I don’t have the same need today. I’m aware of my darkness, but I’m also aware of the light. When you first realize something you just want to indulge in it.

Desi: Absorb it and consume it.

Marie: Yeah, exactly. You’re like ‘Oh my god! Yes! This is how I feel!’ It starts. You start reading and getting inspired by people who have depression and artists and writing. You can pinpoint your writing and get inspired. It’s a total experience.

Marie: Yeah, it was a part of me. I was glad I explored it through nightlife and not through the art scene. Because that would have put a stamp on me that I don’t have right now. Like in the moment how we used to do our makeup, we looked like new-goth prostitutes.

“I don’t really have that need of being eccentric naturally in performance. I don’t have that need. What I wanted to do was something that was ‘subtle psychotic.’”

Desi: I think coming out of nightclub performances is coming from a stronger background. You think that the art world has a certain legitimacy perhaps that the nightclubs don’t have. ‘I’m not real until I’m in the galleries.’ But then you get older and you realize fuck that, it doesn’t really matter.

Marie: I definitely had problems with my past, coming from a nightlife performing scenario. I didn’t think it was intellectual enough. But it was the most pure form of expression. Today I’m making things more intellectual, but it’s because I grew.

Desi: I just saw you did a performance at 1:1 on Saturday. I noticed that in that performance, it was a much more sober you. It was much more serious. I was surprised by it. I was expecting strobe lights and rolling around, and squatting and showing pussy but it was more like a life class. So talk about that performance.

Marie: Well, I already had done the strobe light and pussy. I had done something with my husband when we were more active two years ago. You reach a certain point. I am calmer now, I read more, I also work at a gallery, Reena Spauling Fine Art. The artists we represent, I work tightly with them, that is really influential. Basically, I’ve just been growing. And I have a great context of people around me. I don’t really have that need of being eccentric naturally in performance. I don’t have that need. What I wanted to do was something that was “subtle psychotic” but also something I totally relate to as a woman and a feminist. Metamorphosizing myself into a project that was going to be for sale. For a lot of reasons. The whole thing was satirical and ironic. I was going through these stages to get rid of everything that was characteristic of me, but with a twist. I’m also really fascinated by prostitution, the sense of someone buying you. I’m a laborer. I’m a worker. I actually got an offer today from someone who wants to buy me.

Desi: So you are for sale as an art piece. Or is it for an experience of some sort?

Marie: So they discussed the pricing and labor. What do they want me to do? That also has a price. If someone wants to have a coffee with me then maybe that’s a little cheaper than, say, tantric sex.

Desi: What was the offer?

Marie: Definitely not just having a coffee. I feel a lot of the arts going on today has become somewhat strategic and dry in a way. I’m not a fan of Marina Abramovic and that shit. I want to be humble. I want to talk to the people and thank them for coming. The aspect of putting yourself in danger is something I’m also fascincated by and I want to expose myself to.

Desi: Where are you going to go with that? Opening yourself up to dangerous situtations?

Marie: I think about that all the time, like a paranoia. I think about putting myself in situations where I’m going to get killed or fucked up but that I’m comfortable with. I’m a sadist and a masochist at the same time. Especially with the tape recorder, because it was my voice.

“When I discovered my darkness, I just wanted to swim in it, it was like water for me. I don’t have the same need today. I’m aware of my darkness, but I’m also aware of the light.”

Desi: You were submissive to your own voice. I like these power plays of ‘who is master, who is servant’ and how do they play with each other.

Marie: Exactly, the dialectic between master and servant is something I’m really fascinated with, too. Especially with human relations.

Desi: I think in all relationships there’s that element, with different levels of subtlety.

Marie: I wanted to put that in my performance.

Desi: That was my favorite component really, you being the puppet to your own voice.

Marie: I needed to metamorphosize into a product and remove as much of Marie as possible. I need to control. And Marie was removing that. I am curious now if someone will buy me. How much part will that be of the performance?

Desi: Let’s say you get purchased, will it be documented?

Marie: I would like to film it. The woman that offered . . . It depends on them. Because I’m the slave. If they buy me I will do whatever they want me to do.

“I was living cheap, and rent is not as high when you’re living in a shithole with three people.”

Desi: There’s not going to be any boundaries.

Marie: Well they have to discuss the labor before. Depends on what they want me to do. Everything has a price.

Desi: So they are writing a script in some ways, an outline.

Marie: I can say there’s been a woman that’s serious about buying me and what’s to do tantric sex in her Tribeca loft. That has a price but that’s also something that I’m comfortable with. But I’m not into the freak show of it. If someone wants me to eat their shit, that’s not something I would do. 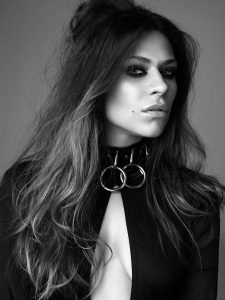