The morning that I went to meet Isis Aquarian, the most renowned wife of Father Yod, the charismatic leader of the Source Family of Los Angeles, in their ex-villa in the Hollywood Hills, I awoke enveloped in the invasive aroma of marijuana, which didn’t seem to have a precise origin. Some hours later, while I waited at of the entrance of the villa named “Father House,” where Isis and the Family lived at the end of the ’60s, in search of the “eternal now,” four large drops of water fell on me from a seemingly serene blue sky. When I explain to Isis that this was the second strange thing that had happened to me that day, she doesn’t bat an eye. “When we lived here with Father, we would wake up at seven, and every morning before meditating we would take a hit of the sacred herb, then we would dive nude into the cold pool. This way we encountered the elements of the earth: fire and water. Today, it’s your turn to experience the ritual; you have been initiated into the fellowship of the Source.”

Had this been the case, I would have been happy to be part of a “family” that had fascinated me for years. A Hollywood entity, commune, cult, temple—it isn’t easy to describe the 125 people who lived together in a mansion, ran an organic restaurant, traveled in a white Rolls-Royce, meditated, practiced tantric sex and followed, from one end of the world to the other, a spiritual leader, who in moments of economic crisis robbed banks. “We were the beautiful, rich and generous proprietors of one of the most famous restaurants on the Sunset Strip. We had long hair and wore tunics. We weren’t hippies or yogis. In that era, we had sex, drugs and rock and roll, but we encountered the spirit,” recalls Isis Aquarian. 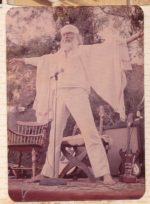 In 1960, Father, who was born Jim Baker, judo-kicked two people who had harassed him. Consequently, the Los Angeles Court branded his hands “lethal arms,” and, like a sort of bionic man, he was constricted to channel his power for “good.” So he left behind both his identity and mortal hands, and created Father Yod. He conquered Hollywood with the Source Café on Sunset Boulevard. John Lennon, Julie Christie, Marlon Brando, Warren Beatty and Jack Nicholson were among his regular clients. “We were the Hollywood elite. It was fun and exciting,” Isis recounts. “They loved us because we didn’t bother them or treat them like celebrities. They considered us much cooler than they were.”

In both the book The Source, edited by Jodi Wille, and the incredibly powerful documentary The Source Family (2012), directed by Wille and Maria Demopoulos, many of the children of the commune, with names like Sunflower, Whisper, Electricity, Shalom, Lotus, Venus, even Aquarian herself, confessed to have heard a voice, seen a light or received a sign to go to “Father.” Before her calling, Isis Aquarian was a quiet cheerleader, a Miss. U.S. Savings Bonds. After a period in New York City, during which she frequented Andy Warhol’s Factory, she settled in Los Angeles and began a relationship with the photographer Ron Raffaelli. She assisted him shooting artists like Jimi Hendrix, Donovan, the Rolling Stones, Bob Dylan, Jim Morrison, Jimmy Page and Led Zeppelin until the day she turned into the parking lot of the Source Café to attend a meditation guided by Father Yod and never again returned home. “When Father saw me enter the restaurant, he looked at me, smiled and said, ‘There you are; I was waiting for you.’” Isis went to live in the “Mother House” next the Father House, which had just recently been sold by Catherine Deneuve, who used it to house two pet panthers. 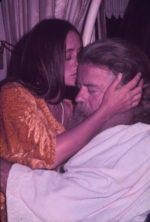 After just a short amount of time, Isis became the archivist, mind and memory of Father. “I didn’t allow anything to escape me. They called me bulldog, dragon lady, hatchet lady, temple guard and priestess.” The Source Family documentary is seen largely through her eyes. She was behind the camera during the hardest and most blissed-out times. She lived the entire experience of a polyamorous brotherhood through the lens of a camera. The Family also had a recording room for their “band,” Ya Ho Wa 13, who were famous for their psychedelic songs and compositions, like “The Savage Sons of Ya Ho Wa,” “Penetration: An Aquarian Symphony” and “The Sacred Herb.” Many of their songs, along with other, incredibly selected occult psychedelic rock pieces were featured in Wille and Demopoulos’ documentary. There is no other music one would rather listen to when looking at live images of births, deaths and resurrections. The coagulation of sounds and images creates an alchemical product that leaves you absolutely breathless.

But 1969 was a touchy time for 125 post-adolescents dressed in white following a man with a huge beard—particularly after a certain other bearded man, who also had a “family” and lived in a similar home in the Hollywood Hills, had just committed one of the most atrocious crimes of the decade. Consequently, the Source Family disbanded for a bit and transferred to Hawaii. California called them back, but soon they escaped again, returning for the last time to Hawaii. The end had arrived, explained Isis: “Father told us he had given us all that he could. We could no longer remain together. He brought us up a mountain and dove off in a hang glider, crashing into the ground. After nine hours of agony, he left his earthly body. He decided to go in this way.” The orphans found themselves adrift, and after a few years, the family scattered.

Isis never remarried. “I remained his wife, Aquarian wife and a single mother at 30-years-old. I remained celibate in his honor. The joy of an orgasm is a chemical. It isn’t necessary to have sex to find it, and I know that I still have a destiny with Father.” Not many would argue with this assertion. Isis is responsible for the Source Family website, has a YouTube channel where she publishes Father’s lessons, produced an album titled “Echoes of a Crone” with the music label Drag City and is also heavily featured in The Source Family documentary, which has been causing a stir for the past months. The film’s run was extended from a week to a month at New York’s IFC Center, San Francisco, Portland, Nashville and LA. The premiere in LA was epic; 40 original Source Family members came out for the occasion, perhaps drawn, yet again, by that very same light that had lured them in years ago. So don’t be surprised if you see psychedelic patterns, long white beards, tie-dye, robes and eternal smiles at a theater near you, but keep in mind not all former Source family members have ended up running health food restaurants and energy healers—there are a few who have made it big in the Silicon Valley doing stem cell research as well!

Today the relationships between the children of the “children” of Father aren’t simple. “My daughter has a more conservative mentality. It’s difficult for her to understand that I was one of 14 wives, but now that the books and the documentary are getting attention, even she is beginning to understand what I went through and what we created was important.”

Returning with Aquarian to the original Father House was an incredible experience. Every corner howled with stories of the past. From one moment to the next, I expected to see nude women climbing out of the pool or Deneuve’s panthers escaping from the garage. Today, the proprietors of Il Piccolino, one of the most famous restaurants in West Hollywood, live here. “All of the celebrities come here,” says the new owner, “from Bono to Sharon Stone to John Kerry.” It appears as though the domestic karma of the villa has lasted through the years. “That house will always have something of Father in it,” says Isis. In fact, after the Family left, the mansion was purchased by the band Abba, which, of course, means “father” in Hebrew. 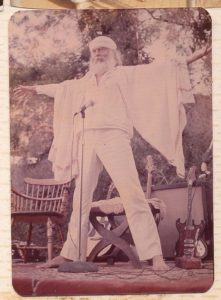 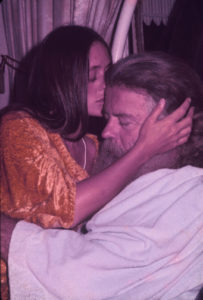 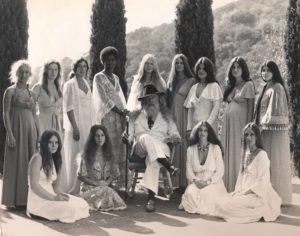