The art of Maurizio Anzeri is like a soundtrack—rhythms and harmonies of a musical ambience that freely combine and superimpose the sophisticated eroticism of jazz and the unabashed sensuality of rock, the existential, elegant energy of Miles Davis and the gothic mood of Bauhaus. Anzeri’s is an artistic practice that evades predictable and traditional patterns and tools to focus instead on the freedom to experiment, compare and blend together a variety of inputs and aesthetic proposals. Everything comes together in hindsight.

Consider the collision of teenage Maurizio with London during the second half of the ‘80s; his fascination with legendary clubs like Marquee, Taboo or Pyramid; his face-to-face encounter with the huge, provocative, charismatic Leigh Bowery. Think about the talent, energy, eclecticism of an irreproducible scene that, from Michael Clark to Mr. Pearl, Boy George to Steve Jones, Rifat Ozbek to Selina Blow, and from John Galliano to Tom Dixon, has transformed streets into a show of glamour and style, a parade of ideas and messages, provocative looks and costumes.

In London where he lives and works, forever marked by the mystery of identity, uniqueness, blatant or hidden beauty of faces and bodies, anonymous human subjects and mass-media icons, characters—protagonists of movies or real life—he could see live and mingle for the first time, with exciting and inexplicable grace, with a genuine taste for provocation, swinging gender and the risk of adventure. Even now, Anzeri obsesses irrationally about physiognomy. Perhaps it has always been his reason for long pauses, sitting in piazzas or squares to observe and to sublimate anonymous faces, individual identities, groups of friends and families strolling. As a natural consequence, he starts collecting the faces, while buying old portraits in small markets or antique bookshops. 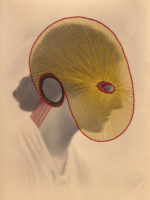 All images courtesy of the artist.

In London he attended the Slade School of Fine Art and through art he keeps looking and thinking. He never attended fashion school, nor was devoted to sewing or embroidery classes. However, complete immersion in and empathy for the mixed-media creativity and dilettantism of his generation has released his propensity to break boundaries. Intuitively, he has collected strands of color and bobbins, instead of brushes and pencils, on his desk. Equally inexplicable is his impulse to draw with a needle and thread. What’s more, he draws on black and white, vintage photographs from his own collection—perforating the paper and distorting facial features, the expressions and postures of unknown men and women, mysterious and anonymous adults and children.

He gradually found personal ways to veil these faces: masking them with innovative multicolored embroidery; impulsive hatches born without jargon and predefined patterns, enriching with artifice and glamour just as plastic surgery or makeup amplifies and redefines our concept of beauty. Like musical scores, the photographs induce emotions and cause our gaze to vibrate. 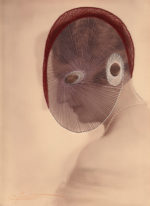 Like London itself Anzeri has been able to successfully mix and combine painting, music, fashion, millinery, dance, performance, architecture, design, theater and cinema. It is not difficult to discern affinities between his embroidered heads and Leigh Bowery’s spectacular hats, or those of Stephen Jones and Phillip Treacy. Anzeri’s artistic imagination shares equally undeniable bonds with certain Modernist exemplars: Antoine Pevsner’s constructivism for example, or that of his brother Naum Gabo, capable of infusing sculpture with the supreme lightness of design. There is even more to Anzeri’s creative intuition, born on the sea in Loano, Italy, in the late ‘60s. Perhaps the family shacks, where men repair the fishing nets, men able to tough out days at sea, but also capable of extreme delicacy, expert and compelling in the eyes of a child, are indelibly etched in the artist’s memory.

Published on these pages are entirely new portraits. These works, both front and back, accented by a variety of colors, apply embroidery in unexpected ways and with surprising effects. Their abstraction reveals and confuses, attracts and unsettles. They transform the technique into an intriguing mix of rigor and looseness, glamour and adventure, expanding the silhouette of each head, infusing each with unexpected alien powers and unfathomable magic and mystery. 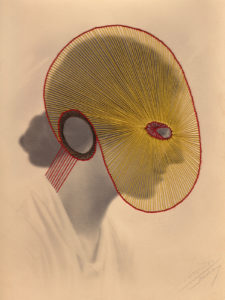 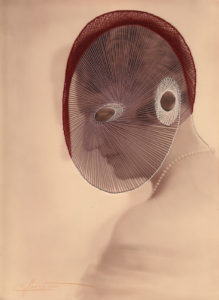 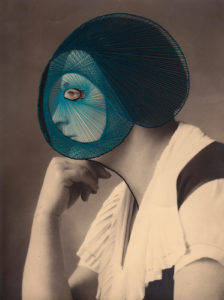