Between his Fall/Winter 2023 shows, Colm Dillane joined Document to talk comedy in fashion and his Louis Vuitton debut

A few weeks ago, Louis Vuitton announced the appointment of its very first guest designer, Colm Dillane of KidSuper, who would be working to bring to life its Fall/Winter 2023 menswear collection. Dillane, who grew up in New York City, began his journey in fashion as a sophomore in high school, making t-shirts for friends. Over the years, his brand has evolved into what he calls a “creative collective,” known for its distinctive artwork and an affinity for breaking the rules of design with a humorous and, at times, daring approach.

Last weekend, Dillane’s debut show with Vuitton pointed many eyes in his direction—a seamless follow-up, creatively in line with the house’s last few collections following Virgil Abloh’s passing. It re-hashed many of the sartorial elements established by the late designer, while also incorporating new features, like Dillane’s artwork, which adorned a few looks from the collection and added a touch of fun.

While Dillane had his moment at Louis Vuitton, he was simultaneously planning a KidSuper show of his own, which took place just two days afterwards—a tongue-in-cheek runway show, hosted by Tyra Banks and casting over 20 comedians. It’s a reflection of the brand’s DNA and Dillane’s own personality, characterized by joie de vivre and a burning enthusiasm for experimentation in the realms of art and performance. Ahead of his KidSuper show, Document sat down with the designer to find out more about his whirlwind season.

Jordan Anderson: How are you feeling after the Vuitton show?

Colm Dillane: How are you feeling? How I’m feeling matters, but I’m more interested in how the spectator feels. It’s very important, especially considering what the show represents, a year after Virgil’s passing, and wanting to honor him. I’m still feeling like a bit of a deer in the headlights. I haven’t fully processed it; I didn’t even celebrate yet. I’m just trying to stay focused and get ready for my KidSuper show. Once I get past that, I should be able to process this all, but the response has been great—especially on the internet, which is incredibly rare.

Jordan: How long were you working on the collection?

Colm: Around two or three months. They brought me on in the middle of the collection, and I think you can tell which items I focused on. It started with very tailored pieces, which weren’t necessarily mine—and then there were the subtle grays, which we thought were cool to start simple [with], and it built up and ended with the pieces with my paintings. 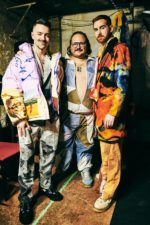 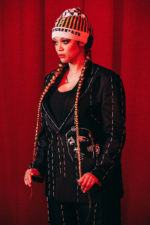 Jordan: What was it like working with one of the giants of the fashion industry, and should we expect more from this collaboration?

Colm: I actually don’t know, in regards to expecting more. I’m kind of in the dark on that one, but it was a very interesting experience. When they contacted me, I was like, ‘Yeah, this sounds cool, I’ll start in January.’ And they were like, ‘No, you start tomorrow.’ It’s a very big company, but they operate like a small independent one; they’re open to trying new things that are out of the box, or making last-minute changes. They really respect the creatives. I’m not super established in the fashion world, and I usually do things my own way, so taking a chance on me was a bit of a risk. I really do respect them for believing in me.

Jordan: KidSuper is always, conceptually, quite out of the box. This season, it’s in the form of a comedy show. Can you tell me more about the reasoning behind that?

I was working on this concept—that, in some ways, poked fun at the fashion industry—then I got the LV call and began reconsidering it. I was worried that people might not take me seriously, but then I thought, They chose me for a reason. They chose me for these ideas, and my out-of-the-box thinking, and I should actually double down on the KidSuper identity. Which is the explorer, the adventurer, but also the sense of humor, the mischievousness, and the New York DNA—which is really what the brand is about. And doing a comedy show is incredibly American.

Jordan: Tell me a bit about the collection, the process behind creating it, and who you think it’s for.

Colm: I was actually designing LV and KidSuper at the same time, and for the first time, I had to think about what the codes of the brands are—which are elements of spirit, life, joy, and, of course, original art. With this collection, we also inserted some key pieces, as I’ve learned that, in order for something to be iconic, you have to repeat it constantly. We have the Kissing bag, which has been doing really well for me—but now we have it in, like, 10 different sizes.

The collection also has a lot of adjustments, because we are working with comedians, not models—some of the pants include paneling, because we had to insert an extra piece for them to fit. But we’ve made them into an aesthetic, and the brand is really for anyone who wants to wear a statement piece. Wearing a KidSuper piece will get you stopped in the street, to start a conversation. 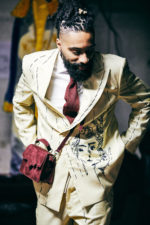 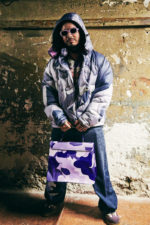 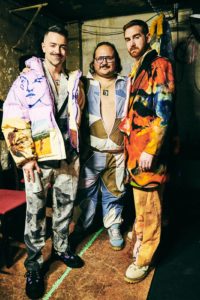 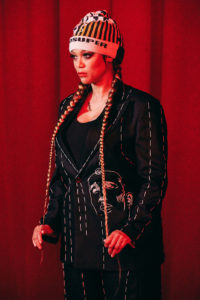 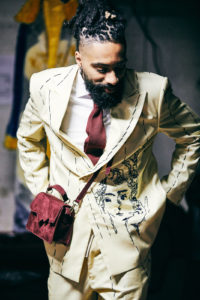 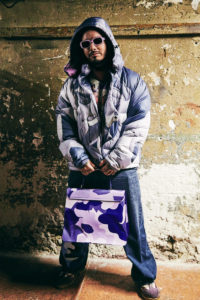