Visual renderings of A Midsummer Night’s Dream’s King of Fairies embody elegance in excess. Shakespeare’s character is complicated, defined by his paradoxical nature. Oberon is both benevolent and malicious, sympathetic and cruel. Designer Julian Louie’s menswear line takes its name from the creature, not for his singular qualities, but for his capacity for multiplicity.

Louie’s debut collection is “an imagined wardrobe for an imagined landscape.” Grounded by a playful irreverence, OBERON’S builds its fantasy world from our reality. It breathes new life into threadbare vintage and antique garments, deconstructing and reworking them by hand: shorts made from ’50s-era taffeta cocktail dresses and jackets built from fragments of textiles, caged under silk tulle. Each piece is made not for a singular place, but for one that folds together the landscapes that informed its designer: the urbanity of his current home in New York, the strange and vibrant characters of Santa Cruz, the California of Louie’s childhood, and the otherworldly atmosphere of Tucson, Arizona, from which his source materials were acquired.

The singularity of each garment is underscored by the form in which it is sold; Los Angeles’s Just One Eye acts as the collection’s home, where it is only available for purchase in person. Following OBERON’S launch, Louie joins Document to dissect the ideation of his brand, playing with scale, and the role of clothing in constructing self-mythologies. 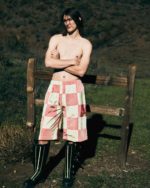 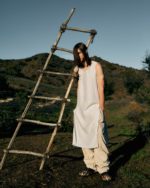 Megan Hullander: How did OBERON’S come to be?

Julian Louie: OBERON’S evolved in a very organic way—a confluence of opportunity, timing, and ideas. I was able to spend time living in Tucson, Arizona, where I had access to a fantastic vintage archive that became the genesis of the project. Because of the vintage source material, OBERON’S is quite process-driven; there are these added steps of deconstruction, repair, and patchwork that might not always play such a crucial role when designing a collection with virgin material. So, technique became a defining part of the brand.

At the same time, I wanted to work on something that was quite narrative—that was an exploration of silhouette and character. It’s a project that is personal, [it’s] about my childhood in Santa Cruz, California, and my memories of the mix of subcultures in that town—of being surrounded by surfers and skaters, community theater troupes, hippies, and liberal academics—and feeling all of those influences, while never quite belonging to any one tribe. A collage of identities. And there are all these other layers for me, about the stories embedded in vintage garments, ideas of dress-up, and costume and performance. 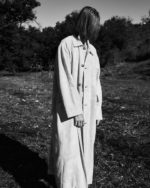 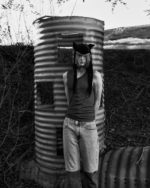 Megan: How do you see the line fitting into the fashion industry at large?

Julian: The project is, in part, a reaction to the industry, both as a designer and as a customer. I kept having these conversations about what feels special, what feels urgent, what sparks some sort of emotional response. And what kept coming up were these ideas about location, specificity, scarcity, discovery. I have a pretty healthy respect for the idea of big luxury houses, and all the power that history and marketing heft and expertise can command. But I also know that there is no reason to try to emulate that as a new brand, in terms of product or storytelling.

For me, it’s about trying to embrace the limitations. OBERON’S is very small right now, and much of the collection is comprised of one-of-a-kind pieces. This is born out of the constraints of working with vintage material, but ends up allowing for a latitude of creation when approaching product: I can do things that I wouldn’t be able to if I were operating in a bigger, more industrialized way. I know this won’t last forever—the brand will evolve—so I am savoring this moment where it’s in its nascency, and all the freedom that affords. The challenge is keeping the project close, contained, deliberate, and thoughtful, while growing the audience and voice to be part of a global industry.

Megan: How do the cities the collection is inspired by each inform your ethos or aesthetic?

Julian: The references to the cities are not so much about inspiration, as a grounding of the collection in a sense of place. There are two zip codes on the labels for Collection 1: Tucson, where the collection started and where most of the sourcing was done, and Brooklyn, where my current studio is located. I want to gesture at landscape and light and environment, in order to give context. This goes back to how OBERON’S sits in the industry, and the opportunity to do something that is specific and localized. I always envisioned the collection on one rack, in one store, in one city. I’m so stoked to be launching at Just One Eye in LA. I like that this first collection is just there—no e-commerce, no worldwide availability. It feels like it has a home. I am by no means averse to scale, but I am appreciating what this launch moment looks like.

“I am interested in the immediacy of garments, and how we use clothing to create our own self-mythologies.” 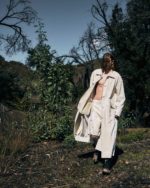 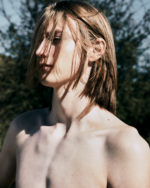 Megan: Where did you source the vintage and antique garments you built the collection from? What was your process of selection like?

Julian: I sourced the majority of the vintage and antique garments from the archive of Desert Vintage, an incredible shop in Tucson and New York, which is run by dear friends of mine. Everything I selected was unsellable for various reasons—pieces were threadbare, stained, falling apart. Instead of building a collection from the ground up, the material and color palette were found through a process of collecting and editing—of stripping away. I pulled all of these pieces that I responded to—some for color, some for textile, some for construction—and then edited everything. It felt a bit like excavation at times, looking for the building blocks of OBERON’S in these racks of old garments. That part of the design process was quite reactive, led by all this existing material. 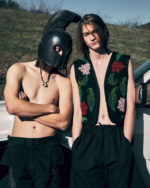 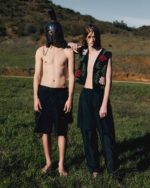 Megan: The King of Fairies, from which OBERON’S takes its name, is a character who’s often described as two-sided—as both benevolent and malicious. Does that meaning carry into your adoption of the name?

Julian: No maliciousness! Or benevolence, necessarily. But sure, I like the idea of a multifaceted identity. The name is a specific reference to A Midsummer Night’s Dream; Shakespeare was a pretty formative part of my childhood, and for years I wanted to be an actor. For me, there is some through line from theater to fashion that I’m still trying to understand. I am acutely aware of how clothing makes me feel, of how a certain proportion defines how I carry myself throughout the day, of the performative nature of clothing. At the beginning of my career, I approached design with a certain remove, an abstraction. Now I am interested in the immediacy of garments, and how we use clothing to create our own self-mythologies. So maybe it is about benevolence and maliciousness and every other trait. OBERON’S is about character. 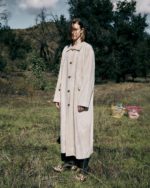 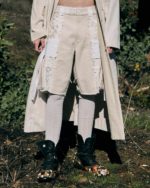 Megan: How do you see the imagined landscape you created for the collection fitting into reality? How do these garments bridge your world with ours?

Julian: I am quite emotionally connected to certain landscapes—emotionally activated is maybe more accurate. Usually, this involves a strong horizon: the ocean, the desert. I think landscape frames everything for me. Santa Cruz, where I grew up, is a town on the coast of Northern California, with a landscape that is breathtakingly beautiful: rugged coastline and perfect beaches and magical redwood forests. And Tucson is a whole other world, with its big-time-drama skies and mountains covered in alien Saguaros. I think I kind of osmose these environments, and they become the backdrop to all of these ideas about character and clothing-as-performance. How do people in these landscapes get dressed? What is the role of fashion there? And then everything is filtered through a more urban lens, back in New York. All of this is pretty internalized, and my design process is very instinctual. So there absolutely is an element of fantasy, but then a certain pragmatism when it comes to craft and product. 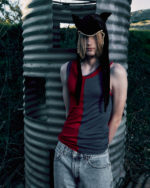 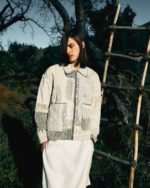 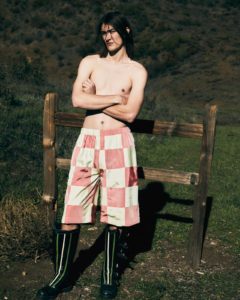 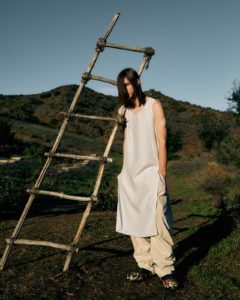 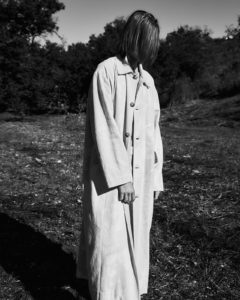 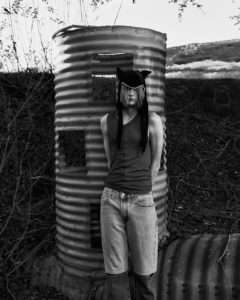 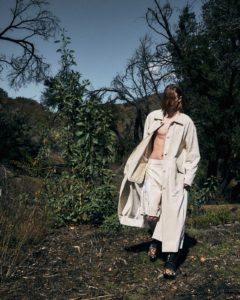 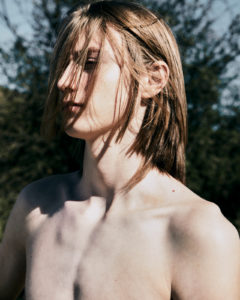 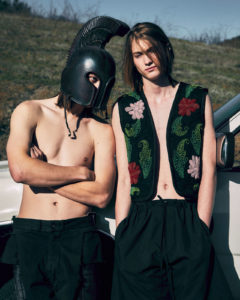 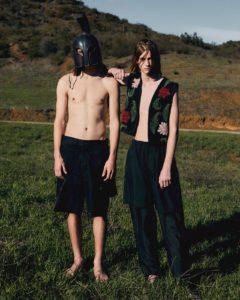 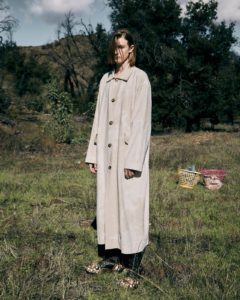 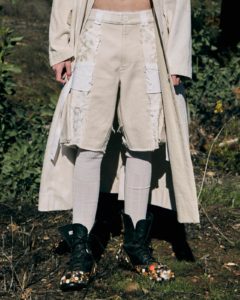 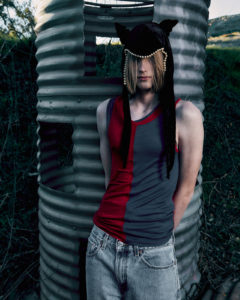 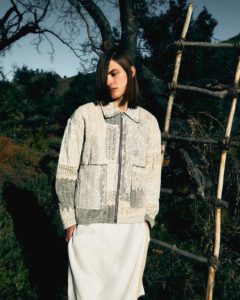