From opposite corners of the art world spectrum, the two organizations join together to usher in the next generation of creatives

Ice Palace Studios was home to the New Art Dealers Alliance this year, and uncoincidentally, one of Basel’s very best parties. NADA successfully presented its 20th-anniversary Miami fair—and as a long-standing champion of newcomers to the contemporary scene, it seemed fitting that they’d host their celebratory dinner in collaboration with the fresh-faced ILY2, an experimental gallery and residency space based in Oregon’s largest city and cultural capital, Portland.

ILY2, headed by founder and creative director Allie Furlotti, has the sort of unpretentious, art-for-the-sake-of-it energy that’s hard to come by in today’s creative climate. An “ever-evolving art nexus that nurtures Portland and its intersecting creative worlds with rotating arts experiences in the form of residencies, retail environments, art exhibitions, and performances,” it’s safe to say that the organization’s mission is far-removed from those lucrative mega-galleries that tend to dominate art world conversations. ILY2’s booth at NADA showcased the work of Vancouver-based artist Sol Hashemi: photographs, sculptures, and the pièce de résistance—a fridge stocked with beer. (Hashemi’s practice concerns itself with medicinal and psychotropic beverages, as well as their makings; it’s a “collaboration with the living organisms that are yeast, hops, barley, and a raft of foraged herbs,” per ILY2’s website. Besides a selection of earthy brews—canned and custom shrink-sleeved—Hashemi would fly or otherwise transport himself to the fridge’s buyer’s venue of choice, to host an interactive party based on his artwork.) 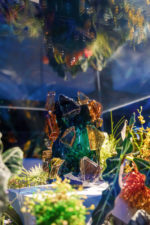 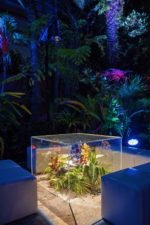 “It’s the exchange between newcomers and established talent that makes NADA worth seeing, year after year.”

Along with design and production Lead Kim Swift, Furlotti and ILY2 were major players in the curation of Thursday night’s happenings, leading design direction for the event. Food and drink were the center of the party’s universe, quite literally. Guests mulled around a curving, never-ending, baby-pink counter, where a rolling dinner was served: a cornucopia of tropical fruit and artisanal cheeses, ceviches and meats and other small bites, and the grand finale, a display of otherworldly cakes (from Ethan Brosowsky, Thierry Isambert, and Yip.Studio, respectively). Lucite cubes served as tables and conversation hubs, dotting the venue’s periphery and housing glasswork by the artist Andi Kovel. St. Louis-based producer-DJ Osunlade manned the booth, taking good care of a congregation of dancers throughout the evening.

It’s the exchange between newcomers and established talent that makes NADA worth seeing, year after year. And that exchange was perfectly distilled in the microcosm of their party with ILY2—an observation of the art world’s next generation and new paradigms—from entry to exit, and everywhere in between. 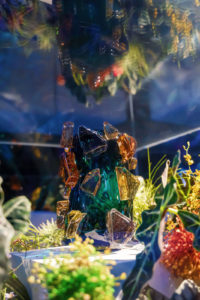 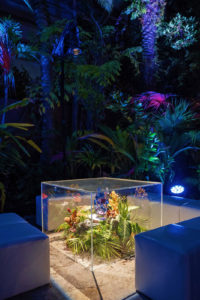 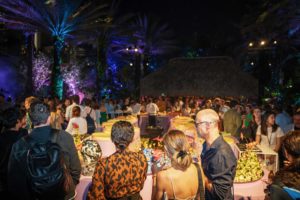