Tucked away in Gramercy, New York is an exclusive, members-only club called Chapel Bar. Located inside a 19th-century church and schoolhouse, the ecclesiastical destination was conceived by Fotografiska and NeueHouse. It’s as beautiful as you might expect, with a chandelier above the bar and a VIP confessional room.

Chapel Bar is run by Desta, Director of Cultural Engagement at the club. It opened in September 2021, but Desta has been a key figure in New York City’s nightlife for years, previously having worked as the director of special projects for the Standard Hotel’s Boom Boom Room, and for various luxury and hospitality brands.

Nearly two decades ago, Desta met iconic model Liya Kebede, who’s left an incredible mark on the world of fashion. In 2003, Kebede became the first Black woman to serve as a representative for Estée Lauder. Paris Vogue dedicated its entire May 2002 issue to her. Kebede continues to model to this day.

The pair became close friends over the years, sharing a connection they describe as “sibling-like.” For Document, the pair sat down at a café in Paris to discuss curating the perfect crowd and finding intimacy in nightlife.

Liya Kebede: Do you remember how we met?

Desta: I think we met through a mutual friend in New York City, on top of the roof of 60 Thompson during fashion week.

Liya: I saw you from afar, and we kind of locked eyes.

Liya: We just knew we needed to know each other. It’s been a really long time. How many years have we known each other?

Liya: When curating a nightlife environment, what matters most to you?

Liya: And you are which in that whole scenario?

Desta: [Laughs] I’m certainly not the whore. I’m the host! 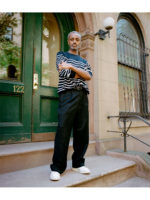 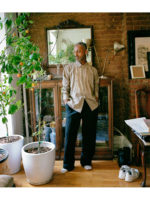 Liya: How has nightlife in New York changed over the years? What do you wish would change, but hasn’t yet?

Desta: It’s kind of gotten watered down. I don’t know if it’s because I’m a little bit older now, but I look for something more controlled. I think it’s lost its flavor. Although I have to say, after COVID, it has really picked up. A lot of the young and the old and the in-betweens kind of want the same thing.

Desta: Intimate places, instead of the big, crazy crowd. But I think New York nightlife is really climaxing right now—it’s definitely going up and up.

Liya: Which city has the best going-out scene for you? I hear Berlin, but that’s just me.

Desta: Yeah. It’s cool, but it also has a lot of dark scenes. It’s not stuffy at all. I think it’s a beautiful nightlife city.

Liya: How does the intersection of style and nightlife vary, depending on the location?

Desta: It [differs by] scene. I tend to go to places that are a bit more upscale, so I get to dress up. If I’m hosting, elements of style are for sure needed. Chicness is always an element that I enjoy, whether it’s casual or not.

Liya: So wherever you are, style is everything.

Desta: Style means everything to me.

Liya: Walk us through your ideal night out in New York.

Desta: It typically starts with dinner. I love intimate settings. I prefer to cook, usually. Great group of friends, from all walks of the world. And then stepping out to a really cozy, nice bar. If we feel like dancing, maybe we go somewhere intimate, like Chapel Bar or Temple. I love Paul’s Casablanca. Great music, always great DJs. 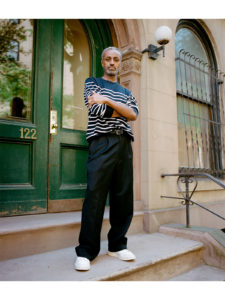 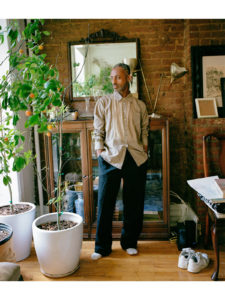