The emerging band spotlights the montage-worthy and the electrifying, from Dolly Parton to Josie and the Pussycats

The image of the so-called “rock star” feels undetachable from anemic boy bodies, with greasy hair and impossibly tight pants. But the rock culture sensibilities of the 20th century don’t quite fit into those of the 21st. While the legends who dominated the ’70s are permanently cast as cool, the formulas they fit into feel sort of lame when adopted today.

For the emerging rock outfit Momma, a (semi-ironic) grappling with modern rockdom dominates the thematics of its latest album Household Name, set to release July 1 via Polyvinyl Record Co./Lucky Number Music. After ditching the pseudo-glitz of Los Angeles for New York and upgrading from GarageBand to a proper studio, Momma is ready to redefine the rock star, pulling equal parts from true gods of the genre—the Kurt Cobains and the Kim Deals—and the mockery of it—the Jack Blacks and, well, the Jack Blacks.

For Document, Momma’s Allegra Weingarten and Etta Friedman curate a guide to rock stars, selecting songs from artists who properly embody the mentality—from Courtney Love to Dolly Parton to, of course, Momma itself.

“You’re a Star” by Josie and the Pussycats
“This is the montage song that plays in the movie while the band is getting their big-time makeovers. I’ll always associate it with being swept away to New York City, getting a fancy haircut and new wardrobe, and seeing your band on a billboard in Times Square.”

“Rock ‘n’ Roll Star” by Oasis
“This song doesn’t need a lot of explanation. We were listening to this almost every day when we were in LA finishing the record. Something about it feels so electrifying—it really makes you feel like you can be something.”

“Awful” by Hole
“Maybe not the obvious choice from this record, but whenever I hear the lyric, ‘They know how to break all the girls like you,’ I think of teenage girls in the ‘music scene’ being taken advantage of, and promised a million things. It’s a really happy pop song about something really sad.”

“Fans” by Kings of Leon
“I adore the first three Kings of Leon albums with all of my heart. This song is interesting because they were huge in England, but hadn’t really made it yet in the States. It just feels like it was written for festivals, to be sung by thousands of screaming fans at Glastonbury. The song is like a love letter to England—thanking all of the fans for making them feel like they’ve made it.”

“Walk It Off” by The Breeders
“In that one Pixies documentary on YouTube, you can watch Kim Deal write this song while she’s on her own tour bus during the Pixies’ 2004 reunion tour. She talks directly about the tropes of ‘the drummer’ and ‘the singer’ in a very tongue-in-cheek way. Definitely inspired some confidence in writing the lyrics to ‘Rockstar.’”

“Rockstar” by Momma
“Paying rent through your rock is what every musician strives for. ‘Rockstar’ showcases exactly that—a lesson graciously learned through Jack Black movies.”

“Heart Beat” by The Runaways
“I once read that this song was written as a love letter to David Bowie from Cherie Currie. Anyone who knows anything about The Runaways knows how huge Bowie was for Cherie as a performer and as a teenage heartthrob. I love how, in the chorus, she (as a rock star) fantasizes about having an intimate moment with another rock star icon: ‘Stop, look, listen, to my heartbeat.’”

“False Eyelashes” by Dolly Parton
“I don’t know if it’s pretentious to discuss how insanely relatable this song has recently been for me. The first few lines say it all: ‘Folks back home think I’m a star now / When they hear my records play / They say their home town girl made good and she’d go a long, long way / Mom wonders why I don’t drive back in that big fine car I own / The truth is I don’t have a car, and I’m ashamed to go back home.’

I’ve been feeling this odd dissonance, gaining a little shred of success, and watching my family be so proud of me back home. It’s an amazing feeling to grow and to have such beautiful support around me. But ironically, as much as Momma is growing, it feels like we’ve barely even touched the ladder of ‘making it’—if that’s even a thing. This song just feels so personal to being a ‘rock star’ or whatever, because I think my family is making it seem like we are bigger than we actually are. It’s awesome, and flattering, but hilarious at the same time when your own reality kicks back in.” 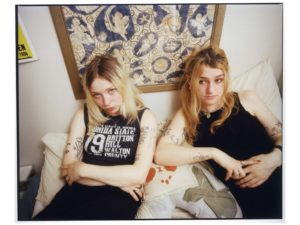