The New Zealand-based artist traverses personal traumas on his most recent album. For Document, he shares a playlist to find sleep amid your own.

The marriage of art and grief is undoubtedly a tumultuous one, but one that also breeds beautiful results. Such was the case for Auckland’s P.H.F., the musical brainchild of Joe Locke, in his newest album Purest Hell, which was released today via Danger Collective Records.

In September 2020, New Zealand’s music community was struck with the loss of Reuben Samuel Winter (Milk, Totems). Purest Hell is a product of that loss, both distilling Winter’s sonic influence as a collaborator and bearing his name in tribute. But it’s not the sort of elegy album that emotionally cripples its listeners; it carries a celebratory spirit, honoring the innovative mind it’s dedicated to in experimentations that blend a synth-driven sound with shredding guitars. It’s an album that embodies the complexities of grief—the pain and sadness of loss, but also gratitude for the life that preceded it.

While deeply personal, Purest Hell retains a sense of emotional relatability—especially at the time of its release, a period of history marked by social and political turmoil. The current state of the world has sent the masses spiraling, and it’s not getting easier to count the sheep who become increasingly clouded by disease and war. For Document, Locke shares a playlist to aid in finding mental purity at 3am, a means of finding those sheep among the fog. “This playlist is a compilation of music I like to listen to when I’m awake in the middle of the night,” he explains. “My sleep patterns are terrible and I am usually wide awake at the worst times, which I have just accepted at this point. So I will just doomscroll and listen to music, and hopefully fall back asleep before sunrise.”

“summer panic” by Rew
“This is a song by my good friend Andrew in Delaware. His music really means a lot to me, and this song just felt like a good intro into the overall feeling I get at this time of night. Something kind of nice about being awake while everyone is asleep in a way.”

“Tendrils”by L.Cie
“This track is extremely anxiety inducing, which is usually my first feeling when I wake up. The immediate stress of being conscious again after your eyes open, especially if you wake up just after a nightmare.”

“1” by Petal Supply
“This one speaks to the mania I get a lot of the time when I am awake in the middle of the night, like my brain won’t shut off. It’s also really pretty, which after being so sleep deprived, a lot of things seem so pretty and euphoric.”

“Mineral Love” by Bby Eco
“There is something super solitary about this song, like almost in a dystopian way. It really feels like how it feels to watch the sunrise on your own to me, for some reason. There’s almost no worse of a feeling to me, than being awake and hearing the birds waking up before the sun comes.”

“Path Forwards” by glyphli
“I feel that this song makes me feel the exact same way as the one before, both really isolating I guess. I’m not necessarily meaning that in a bad way, it’s just a really strong feeling I get when I hear them. I like to be alone a lot of the time, this one is so overwhelmingly calming and soothing, like you’re floating.”

“Visualisation” by Blank Banshee
“This actually used to be my alarm tone years ago for work—It was the best way to wake up. It’s essentially just a guided meditation over music, which I actually did properly for the first time recently, so it made me think of it. I’m sure lots of people suffer from insomnia too, so maybe this one can be kind of helpful.”

“Violence” by Andy Scott
“There is such a sense of dread to this song, which is pretty fitting a lot of the time. Sometimes I get this overwhelming existential fear of just being alive. I love the dynamic of this song too, it starts off quite calm and pretty, then smacks you across the face with this kind of cold, austere change in pace.”

“no sleep”by Aaron Cartier
“Even though the title of this song is super obvious, it has such a calm energy, it makes me want to drift off. The whole song is so understated and simple, there isn’t much to say really, it speaks for itself.”

“Deep Water” by Portishead
“This is easily one of my favorite Portishead songs, it’s off their last album and kind of a stand alone song in itself. It sounds nothing like their other stuff really at all and is just super pretty. A lot of their music has always sounded evil to me except this one. The lyrics so perfectly sum up how I feel when I’m lying in bed, staring at the ceiling at 3am. I wanted to close out this playlist with something positive I guess, and this is definitely the one.” 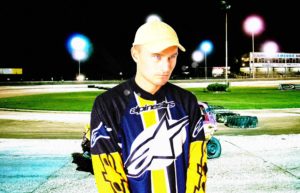 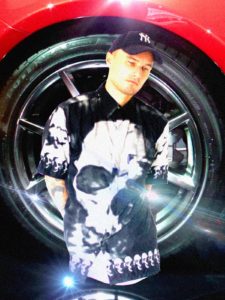