The band joins Document to discuss their latest album, the failings of guitar music, and balancing national and regional identities

The redundancies of isolation left mankind stretching for new words, new ways of communicating just how wretched reality is—“fuck” doesn’t carry the same weight it once did when now, everything, it seems, is fucked. Fontaines D.C. finds a new (old) profanity in Skinty Fia, which loosely translates to “the damnation of the deer.” It’s an old Irish swear, derived from the immense Irish elk that went extinct when their antlers grew so large they could no longer hold up their own heads, and those who could, became entangled in the trees. Perhaps, an apt metaphor for the big-headedness of humanity.

The Dublin born band ditches the bad boy poet reputation that has haunted them for the better part of the last five years, proving their music is more than merely the sum of its influences, among which are classic Irish literature, goth bands and, surprisingly, hip hop. Skinty Fia maintains the sort of retro appeal and intellectual references that made the band popular, but experiments more obviously with genre and the structures of its lyricism. “In ár gcroíthe go Deo,” or “In Our Hearts Forever” in Gaelic, is a response to the Church of England’s decree that a translation of the phrase be included on a gravestone, so as to not be mistaken for a political slogan. The incident happened, not a century ago, but last year.

The title track accurately encapsulates the attitude that dominates the album. The micro and macro aggressions towards the Irish in London have forced the band to grapple with the regional and national identities that they carry. In leaving Dublin for London, they repossess an appreciation for their home country. “We got that kind of pride back, I suppose,” frontman Grian Chatten explains. “Pride is a bit of a dirty word. But we got that.”

Chatten joined Document to discuss the failings of guitar music, xenophobia, and the making of Skinty Fia, which comes out tomorrow, April 22, via Partisan Records.

Megan Hullander: I was looking through the comment section on the “Jackie Down the Line” video, and a number of bands cite your music as proof that ‘rock isn’t dead.’ Do you think rock is dead? I wouldn’t even necessarily classify your music as rock, would you?

Grian Chatten: Music changes and people don’t necessarily want to listen to their music in the form of the previous generations that preceded them. It’s a kind of spirit. For example, the idea of rock, I think of it as I think of it, is something that I’m not really interested in. Kind of like rock without the roll and the overly compressed guitar sounds and the snare sounds–the big, fat, meaty, impenetrable sort of guitar sound. I don’t know that I’m into that. I don’t know if you’d call what we do rock.

Megan: This album feels thematically darker than your past works. Was there any particular driving force behind conceptualizing it?

Grian: I don’t necessarily plan, there’s not too much consciousness to the making of an album with us. The commonalities between the songs thematically, spiritually, or sonically often reveal themselves to me much further down the line. It’s almost like when you’re doing history or sociology, you have to look at what was happening around the time that it occurred in order to glean some sense as to why it became the way it was. And that’s how it feels with our records, when we write them.

When we moved to London, we found it a very trying place for the fact that we’re Irish. There’s still certain amounts of prejudice and stereotyping, which is, in terms of how bad it is here, in terms of the sort of the xenophobia or unwelcome that certain communities receive, I think Irish people have it fairly easy, obviously. But it’s still enough to make us feel sort of a bit unwelcome, and a bit of friction and at odds with ourselves in our surroundings. And that’s a potent impetus for writing.

Megan: Why did you move to London?

Megan: Have you gone back since?

Grian: I went home for both Christmases. I’ve been home for a bit of work as well. I’m really at odds with that as a country at the moment. In a way, moving to London, which is much more accessible for someone of my age, even with COVID aside, I think it’s a more accessible city, there’s more variety. I very quickly became comfortable, well, it wasn’t very quickly, but I’ve gotten comfortable enough to the comforts that come with being in London, as well as the being inspired by the discomfort of being treated differently, because I’m from a different country.

“When we imagine that our songs are part of a lexicon, or a legacy of Irish folklore and mythology—it gives us an extra sense of largeness or importance.”

Megan: You’ve talked a bit about the external forces that shaped the album, but it does feel fairly introspective as well. Was that something that was forced onto you by the pandemic?

Grian: We toured extensively for two years, we didn’t really have a sense of place. It got to a point, it didn’t matter. We were anywhere, nowhere and everywhere, at the same time, because all that place was, to us, was two bars that surround the venue that we played. We had cans of Guinness and pots of hummus, whatever they’d provide. But now we’ve had the opportunity and the good fortune to sit in a place for awhile and actually live somewhere. And with that comes a different kind of anxiety, or, it’s just a different palette.

Megan: The imagery on this album is really striking, how much are aesthetics tied into your process ?

Grian: Some aesthetics we’ve borrowed from Irish folklore and mythology, like the book of cows. These are things that lend our songs a sort of grandiosity or grandioseness. Because when we imagine that our songs are part of a lexicon, or a legacy of Irish folklore and mythology—it gives us an extra sense of largeness or importance. But, to be honest with you, we’re very influenced by not having people figure us out. If I look around and see people are starting to dress a bit like us or whatever, then I immediately kind of want to dress differently. I think people are like that, in general.

Megan: I feel like the act of leaving your home feels like an assertion of identity, in some way, whether or not that’s like a subconscious thing. Did you feel limited by working from home or at all confined by that space?

Grian: I reconciled because I was kind of embarrassed or hesitant to express our Irishness. Particularly after our first album, which I feel like is quite Irish. I didn’t want to overdo it, and I didn’t want it to come across as a cynical kind of marketing ploy, or whatever, like the Americans will love this. I feel like we stepped back a bit from that, not not intentionally. And with the break, it gave us that just that extra bit of time and that extra bit of silence. We got that kind of pride back, I suppose. Pride is a bit of a dirty word. But we got that. I just don’t feel afraid to express our culture anymore because that’s who I am. And I feel like my decision to not do that so much was probably based on fear of other people’s opinions. I don’t really want that to ever affect our work.

“Music is developing at a historic rate. I think that you need to be open minded and look in the right places. I’m more willing to do that now than I was before.”

Megan: Moving out of the thematics, where did this album feel like a departure sonically from your previous work?

Grian: It’s got traces of modernity. There’s a song called “Skinty Fia,” I don’t really know what that is. It’s pretty weird. There are hip hop influences, primal screams. And I think I’m getting more confident as a lyricist in writing more simply, and in my mind a bit more succinctly. I’ve rarely before told an outwardly simple beginning, middle and end story, which you might call that song, ‘The Couple Across the Way,’ which is just me on the accordion. And that that song came from the title first. Because there were a couple across the courtyard. And I just thought that it’s all there in the title, now all I have to do is not fuck up that title. Because the song is good, unless I ruin it with the actual song.

Megan: It’s interesting that you say that it feels more modern when I don’t see a lot of contemporary comparisons made by fans with your music. It’s more like The Fall and The Cure and Bauhaus and Joy Division. I think it’s really easy now to reminisce or feel nostalgic for time periods that we maybe weren’t even around for, but what’s exciting for you about more modern sounds?

Grian: It’s so exciting to me to find or to feel like I understand genius in forms that I can’t really work in. So much hip hop is touched by genius. I think genius is all over that expansive genre, way more than it is in most guitar music at the moment. Music is developing at a historic rate. I think that you need to be open minded and look in the right places. I’m more willing to do that now than I was before. 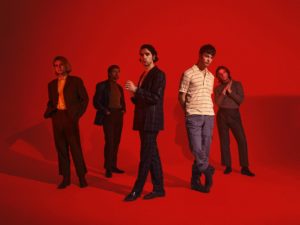