From Studio 54 to GG’s Barnum Room, the photographer captured the quintessential scenes of the nightlife era

“I see a bit of innocence,” says Bill Bernstein. We’re talking over his pictures from the late ’70s, taken in clubs across New York like Studio 54, Xenon, Paradise Garage, GG’s Barnum Room, Mudd Club. It was disco’s heyday—a moment where Civil Rights, Gay Rights, and Women’s Liberation seemed to have found their footing all at once. “I mean, people were really just living their lives,” Bill goes on. “Nobody was getting hurt. There was no hatred, there was no anger. People were very open to having their photographs taken.”

In Bernstein’s view, the city’s disco era presented a sort of fleeting utopia: It arrived at night, and endured through the morning hours, taking shape in converted theaters and various industrial buildings. Of course, it was still a precarious time. The war in Vietnam, Watergate, gender discrimination, racial conflict, economic inequality—none of that was out of the social consciousness, particularly for minorities. “It’s a little bit like an older person looking at the Roaring Twenties,” Bernstein reflects. “It was a great time, and it happened for a certain reason.” That is, oppressed people could take a breath of fresh air, however marginal, following the violence of the decades prior.

Bernstein was working for the Village Voice in ’77, and went to Studio 54 for the first time on assignment. He kept returning, following the scene through its dissolution in the early ’80s, when AIDS first hit New York. His photographs capture disco’s quintessential qualities: the elaborate staging, the clothes, the characters, the communities. “Queer culture was very instrumental in popularizing,” says Bill, “and Black culture was very instrumental in creating the music. It was the first time that women were the stars—the divas like Donna Summer, Gloria Gaynor, you know.”

Between the hedonism and the kinship, Bernstein captured something intangible: the feeling of nightlife as it should be, with room to dance, strangers to meet, and plenty to go around. For Document, he speaks to what he learned as a member of the crowd. Images from his book, Last Dance, are currently on view at Defected Records’ London office, in collaboration with Glitterbox, through April 29.

Morgan Becker: How did you initially find yourself in the middle of the ’70s disco scene?

Bill Bernstein: It was really happening in New York towards the end of the ’70s. There were lots of clubs everywhere. I was working at the Village Voice in New York City, and I was assigned to go cover an event one night at Studio 54. I knew really very little about the whole disco scene. Honestly, it was just starting back then. I went there that night, and I just picked up on what was going on, and I thought it was really, really interesting. I decided to keep looking around New York City to see what the other clubs were like. I just kind of went on a mission.

Morgan: What were some of the other venues you would frequent?

Bill: There were all different kinds. There was one that was similar to Studio 54 called Xenon—it was also an old theater, so it had a lot of theatrical elements to it. Like, rigging on the ceiling so you could drop scenery. It had lighting on the ceiling. It had a balcony where an audience would sit. I think it was an old TV studio—I think they both were, actually.

Morgan: Did you find that there were characters who would appear across all the venues?

Bill: There was a little crossover between some of the clubs, like Studio 54 and Xenon, although Studio 54 really had their crowd. They went back all the time and attracted the celebrity element, and a certain kind of creative type. Xenon was a little bit of that, and a little bit of the tourist population, and the suburbs—New Jersey, the outer boroughs, that kind of thing. People kind of tended to have their club.

Morgan: You’ve spoken about this time as a moment where Women’s Rights, Civil Rights, and Gay Rights movements collided to create a feeling of liberation. Do you think that this extended to other facets of everyday life at the time?

Bill: I think that all of those movements from the ’60s gained traction during that time period, and I think that the place that you could sort of see them all together, under one tent, was the disco. Because it was a party place, and it was accepted. The whole concept of inclusion—whether you were Black, gay, female—was really part of the ideology.

Morgan: What is it about nightlife that you feel drawn to document? 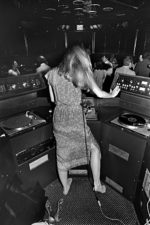 “I think that all of those movements from the ’60s gained traction during that time period, and I think that the place that you could sort of see them all together, under one tent, was the disco.”

Bill: I was trying to capture what I saw at that time, that I had never really seen before. I was coming from the ’60s Woodstock era—that was the parties that I saw, and the gatherings I saw, the concerts and all that kind of stuff. They weren’t as diverse. They weren’t as inclusive. That wasn’t really part of the scene.

I think that queer culture had a lot to do with the disco experience. It started in David Mancuso’s loft in New York City in the early ’70s as mostly gay gatherings. That was kind of the birthplace of the whole disco experience—mixing records all night long. Also Fire Island had places like the Ice Palace. Queer culture was very instrumental in popularizing, and Black culture was very instrumental in creating the music. It was the first time that women were the stars—the divas like Donna Summer, Gloria Gaynor, you know. In rock and roll at that time, all the bands were guys, and all the stars were guys. It wasn’t uncommon for a woman to become a star in the disco world.

Morgan: In photographing a club night, did you feel fully integrated with the crowd? What was your relationship with your work in comparison to the party?

Bill: I was pretty much there as a reporter. It wasn’t about what I was feeling so much as what I was seeing. When I was there shooting, I was really working. I wasn’t doing any drugs, I wasn’t stopping to do any dancing. Most of the time, I went by myself with my camera. There was so much to see, you know? It was so visual. It couldn’t just be described in words, like some things.

Morgan: Can you talk about the moment where disco seemed to come to an end, at least in respect to what it once was?

Bill: I started shooting in ’77, when Studio 54 opened up and Saturday Night Fever was a very popular movie. The whole thing about disco became part of the national discussion. I stuck with it until the beginning of the ’80s, when I felt a couple things. In some ways, disco had reached its peak, and it was starting on its way down. It had become overly popular and overly commercialized to the point where you would see commercials on TV for some product, and it was all about disco.

There was also something called Disco Demolition in Chicago. This DJ was playing rock music, and when disco came in, he lost his job. He was very vocal and angry about the whole disco scene. He created the ‘Disco Sucks’ movement, and invited everyone to come to this baseball game, this double header, and bring their disco records. After the first game, they put all the disco records in the center of the field and blow them up [laughs]. It was this crazy event that was just trying to say, ‘Hey, we’re really sick of disco.’ Studio 54 got so big and so popular, and Steve Rubell and Ian Schrager, the owners, were sifting cash out of the register and hiding it in the ceilings and floorboards. They got busted by the IRS. They got sent to jail. So the whole tone of Studio 54 changed. It wasn’t quite as great as it was.

Morgan: Looking back at these photos today, what’s the emotion that comes with that?

Bill: You know, it’s funny. In spite of all of the freedom of expression and open sexuality and drugs, I see a bit of innocence. I mean, people were really just living their lives. Nobody was getting hurt. There was no hatred, there was no anger. People were very open to having their photographs taken. It was before the iPhone stuff, where you get a little jaded to the whole ‘photography at a club’ kind of thing.

It’s nice. It’s reminiscent of that time period for me, which is gone. Over. It’s a little bit like an older person looking at the Roaring Twenties, you know? It was a great time, and it happened for a certain reason—prohibition, and the state of the world at that time. It was a little like that. Like looking back at a kind of open time for club people.

Morgan: What’s a feature of disco that you wish could apply to society at large?

Bill: Inclusion is the main word. I mean, look at the world we’re living in today. It’s like, there’s such a strong conservative resistance to inclusion in our world. It’s so antithetical to what I would like to see, and what I saw back then. I think that we all have to learn how to live with each other. There’s no reason to not figure that out. I like that in terms of a worldview, what was happening at those clubs.

Morgan: What’s the most memorable moment you witnessed over the years?

Bill: One night at Studio 54, I saw someone that we all know today—Miss J Alexander. She was there dancing with this very straight Wall Street broker. They were both having a great time. They didn’t know each other. They just happened to bump up next to each other, and started dancing. I thought that was great. A great visual, and a great moment of acceptance and inclusion. 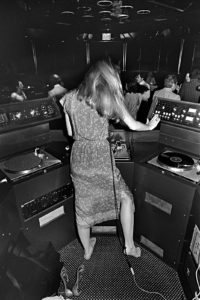 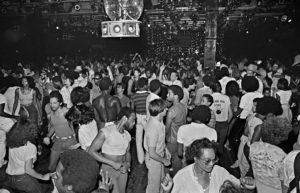 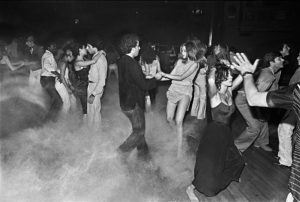 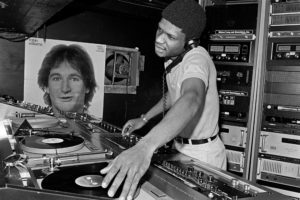