There’s a certain confidence that lives only in girls who have grown up in New York City. And then, there’s the unmistakable confidence of Yasmina Ysabell. Whether she’s telling you a funny anecdote about her day, searching for a rare vintage piece only she could pull off, or singing you a melody she’s working on, the musician radiates a warmth and magnetism that makes you feel like you’re in the presence of a star.

“I just want to see all women who are made to feel undesirable take up more space,” Yasmina says matter-of-factly. Her identity as the American child of a Guyanese and Nepalese parents has influenced every aspect of her work. This hybrid perspective has been vital to her holistic and spiritual understanding of the complexity of the human experience that she writes about. As much as she pulls from her upbringing, it is not her final destination. “Within my cultures, conservative views about women’s roles in creative fields still reign. I want to be part of turning that on its head.” Often utilizing the depth of her own femininity, she aims to create something for women especially, with their experiences at the forefront.

Ysabell’s debut single (March 3) titled “Scales” is one of my favorite kinds of songs. It speaks to our vulnerabilities and inner doubts over a beat that makes it impossible not to dance. I met Yasmina Ysabell for coffee, and we discussed not only the musical influences that inspire her, but the places she cherishes most in the city that has made her who she is today.

Yasmina Ysabell: ‘Scales’ came to be when my friend and producer on this track, Mike Dvorscak, cooked the track up over the summer. He and I have such a love for house music and UK dubstep. We constantly send each other tracks back and forth, so when I heard it for the first time I knew it had to see the light of day. I was also in such a deep transitional period at the time, which led to me questioning myself. 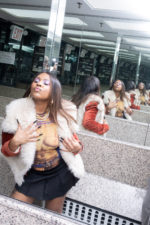 Julia: How would you describe your sound in three words?

Julia: What neighborhood are you from and how did it influence you?

Yasmina: I’m a New York City baby through and through. I was born and raised in Midtown East, Manhattan. It’s not somewhere you typically hear people say they’re from. In Midtown, you’re rubbing shoulders with businessmen, diplomats, and frat boys. I’d like to think I’ve been able to learn how to navigate almost any situation because of it.

Yasmina: I will always love Webster Hall. I’ve gotten my fake ID taken away there! I raged and ruined multiple pairs of sneakers moshing in that place. It’s a venue where you can see artists before they really blow up, similar to SOB’s which is another NY staple. SOB’s welcomes such a range of artists and genres and I love that.

Julia: Favorite spot that has opened during the pandemic?

Yasmina: There’s a really cool gallery that recently opened on Ave B called The Main Event. I strolled in one day and loved the vibe so much. There were dope collectables and vinyl, and a heavily Caribbean influence which I love, being Guyanese myself. Seeing Beres Hammond records brought back a special kind of nostalgia. Also, my newest favorite boba spot is Xing Fu Tang on the corner of St. Marks and 2nd.

“Sharing art publicly can be such a vulnerable experience, but when it’s something you really stand by and love, the world deserves to see it come to fruition.”

Julia: Describe your dream night out in NYC.

Yasmina: Where do I start! First, dinner at the bar at Smith and Wollensky. It’s a Midtown staple. There are cooler steakhouses for sure, but nothing compares to the energy there—classic and irreplaceable. Then we’d do drinks at Westlight on top of the William Vale Hotel and dancing at Kinfolk, RIP… That place was a lot of things, but I always had so much fun there. We’d probably end the night with two reggaeton empanadas from Empanada Mama, everyone’s favorite.

Julia: What influences your personal style?

Yasmina: My mother and father. My mother is from Guyana. When she came to New York to work for law firms in Manhattan she was exposed to the luxuries of Henri Bendel and Bergdorf in the late ’80s and ’90s. Very Fran Drescher, two-piece suit, Moschino and Vivienne Westwood vibes. My dad is totally rock and roll and loves the ’70s. He’s big on cowboy boots, leather, and cowhide, but is also from Nepal so there was a lot of linen, colors, and ‘hippie’ looks too. I don’t feel tied down to one type of style.

Julia: Favorite article of clothing you’ve ever had?

Yasmina: That’s hard. I recently purchased Dior monogram clogs. I love them so much because clogs are not most people’s go-to. So I just feel majorly cute wearing them. I also had this beautiful Helmut Lang gown that fit my body like a glove. I wore it on New Year’s Eve in 2018, it absolutely got destroyed that night. I still think about that dress.

Yasmina: Hands down, Marcela Avelina—not only because she’s like family, but because her sound and her voice have evolved to be even more powerful and profound, and that’s the most exciting part. She’s coming out with new music soon so I’m really excited for other people to be able to experience it too. 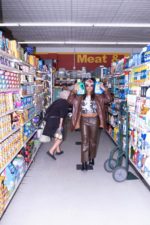 Julia: Dream artist to collaborate with in the future?

Yasmina: James Blake. I find his music to be so captivating, his voice is stunning and he experiments a lot in his music. I really enjoy that, you can tell he finds his flow and rides it out. I would absolutely love to be in the studio with him one day.

Julia: The advice that has meant the most to you as you start this journey as a musician?

Yasmina: That you have to do it for you, and for the sake of you loving your art. Not for approval, not for attention, not to prove anything to anyone. Sharing art publicly can be such a vulnerable experience, but when it’s something you really stand by and love, the world deserves to see it come to fruition.

Yasmina: After the release of my debut single ‘Scales,’ I’ll be working on shooting the video, which is really exciting because I think setting a visual landscape for a track is so necessary. I’ll also be working with Beachball Records on some new music! 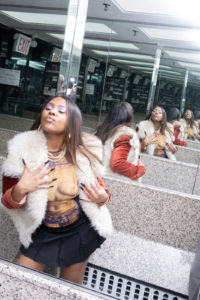 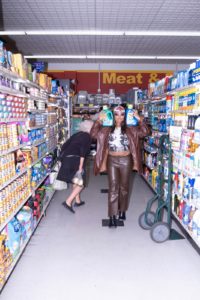