“It’s important that Mimi gets to play to no end, without direct purpose,” reads a press release from Lubov Gallery in Chinatown. “Things come to the fore unbidden.”

It’s a statement that rings true as soon as you walk into her exhibition space. Mimi Park’s Dawning: dust, seeds, Coplees is far from a typical art show—it’s a multisensory experience, an ecosystem built by hand, the ongoing nurturing of a living entity, half-nature, half-machine. The New York-based, South Korean artist finds inspiration in pattern and connection, which come to encompass “the microscopic world, soft circuitry, and play therapy.” Park’s work is characterized by interrelation and communication between disparate nodes in an active web; she engages in world-building, crafting environments that are populated with found objects and kinetic ‘living’ sculptures.

The show is split into two rooms. The first contains the primary exhibition, whose centerpiece is Play Humming Planting—a green, sprouting landmass with rolling topography, featuring its own clearings, pathways, hills, and valleys. Little creatures move through and around it: Coplee Swarm is composed of makeshift insects, which were fashioned from toothbrush heads, vibrating motors, and pipe cleaners. Figure 3 resembles some kind of robotic farm animal, with yarn and wire ears and a cowbell as accessory; it moves around atop an RC car. Long Person wears a tiny, hand-knitted sweater—its body is a plexi rod, letting it tower over the rest, with a baseball for its head. 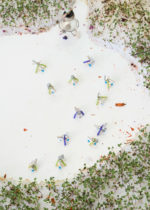 The exhibition’s second half is called Studio Room—a smaller space, which is stocked with anything Park might require to patch up her creatures and their landscape. With dying batteries and dying seedlings, it’s a need that arises a lot. Studio Room is meticulously arranged, sans shelves or boxes. Buttons, rocks, scraps of fabric, bundles of thread, patches of grass, and miscellaneous bric-à-brac are aligned in rows on the floor. It’s like an uptight child’s bedroom, in the midst of arts and crafts.

The lack of seriousness is charming, and so is Park’s commitment to treating her work as a breathing, feeling thing. In that regard, Dawning takes on the aspect of performance art: You see it move—by itself, and by the artist’s hand—you smell its earthiness, hear its clatter, touch its many textures, and stand by as it travels through life’s stages. 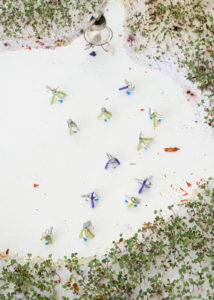 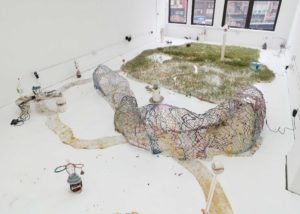