The genius balancing act of shoegaze has finally been fulfilled in the modern age. Just Mustard masters the ethereal genre’s allure in all of its parts, with the kind of small-town sensibilities that deliver a feeling of oneness between the otherwise barriered groups of audience and performers. The fullness of the band’s sound fills an arena as easily as it does a garage. Just Mustard dives into a sort of throbbing repetition that mimics in sound that visual experience of moving through suburbia.

Perhaps it’s the band’s hometown that differentiates it from past acts. Dundalk lies on the eastern coast of Ireland, surrounded by medieval ruins—a distinctly more dramatic setting than those characterized by rows of picket fences and shuttered windows. The sense of haunting drama in Heart Under is easily imagined soundtracking a psychological thriller or villain-driven horror sequence that is more Gothic than retro. “We don’t mind it at all. I’m always getting referred to as ghostly, like a horror film character. We have a song called ‘October’ and a song called ‘Boo.’ I think we probably feed into it,” vocalist Katie Ball muses.

Ball acts as equal parts lyricist and hypnotist, her voice holding the sort of eldritch allure usually attributed to sirens enticing unsuspecting sailors to violent deaths. The wall of sound behind her, produced by guitarists David Noonan and Mete Kalyoncuoglu, drummer Shane Maguire, and bassist Rob Clarke, is equally experimental, juxtaposing sounds that are dreamy and watery with more heavy, industrial tones. As with any good noise band, Just Mustard’s appeal is grounded in guitars that don’t sound like guitars.

Handpicked by Robert Smith to join The Cure onstage at Malahide Castle in 2019, it’s unsuprising that Just Mustard is on the fast-track to global notoriety. For Document, Ball and Noonan discuss the making of Heart Under and the natural evolution of their band’s spooky reputation.

Megan Hullander: You just played your first New York show. Did the crowd feel different for you?

David Noonan: We’ve played very few shows in America. So it’s hard to know. But everyone was deadly silent in between each song. We weren’t sure if that was normal for New York or not.

Katie Ball: Apparently, the barman stopped making cocktails in between two of the songs, because it was just pure silence.

David: Not always the case in Ireland.

Katie: There’s a lot of chatting.

Katie: It’s an hour away from Dublin and an hour away from Belfast. There’s a venue called the Spirit Store there, so a lot of bands would stop in Dundalk on their way between the two. There is a real healthy music scene. Everyone’s playing different stuff.

Megan: How linked are visuals to your writing process?

Katie: I think the visuals are really, really important to us. When we were writing, we knew the color scheme we were going for [before we knew] what we were going to do.

For photos, we take inspiration from films a lot, because I think that band photos usually look really awkward. Search ‘band photos,’ and you’re not going to find something you like. We’d often look at film stills and try and, you know, to create something similar to that.

David: A few times during [the making of] this album, we’d made a mood board. Just trying to keep up as we were making the songs, and it morphed over time. So if something did pop up, we kind of had a reference for what we wanted represented visually.

Katie: Sometimes, you think of the sound as visuals as well—as if it were a live scene.

“I think that band photos usually look really awkward. Search ‘band photos,’ and you’re not going to find something you like.”

Megan: You have a reputation of being sort of ‘spooky.’ Is that something that resonates with you guys or do you feel like it’s off the mark?

Katie: We don’t mind it at all. I’m always getting referred to as ghostly, like a horror film character. We have a song called ‘October’ and a song called ‘Boo.’ I think we probably feed into it.

David: I don’t think we meant to though; I think it was a natural thing.

Katie: Yeah, because you love Halloween.

David: Yeah, I love Halloween. When I was younger, that time of year was my favorite. I think it is also definitely autumn music. It’s not really for summer.

Katie: Yeah, I think you need to play in the dark.

David: Because there’s a lot of tension, musically the keys we gravitate towards, and melodies on bass lines and stuff, are spooky. It’s just a natural thing.

Just Mustard’s album, Heart Under, doesn’t debut until May 27th, so for now you can enjoy singles ‘Still’ and ‘I Am You,’ or catch them on their tour supporting Fontaines D.C. 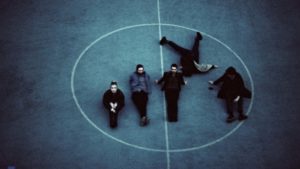