In prioritizing synchronicity in vision over technical experience, the band’s euphoric debut album brings a new-age edge to nostalgic sounds

Glove may be one of the giants of contemporary music—certainly of the current era, with the oversaturation of hot girl indie pout songs and lyricism built on its potential for virality. On paper, the rubric that defines the Tampa-born band could easily imply an exhaustion of obvious musical tropes: a lack of classical training, reinterpretations of nostalgic tones, and a goth-adjacent aesthetic. But Glove proves there is hope for what was thought to be a drained musical vocabulary, with tracks that feel both dystopic and euphoric, and indisputably danceable.

Half of Glove had barely touched an instrument before joining the band. But that was exactly what its founding member and architect Rod Wendt wanted. They pulled bassist Justin Burns into the project when his solo act opened for one of their shows. The punk learn-as-we-go mentality that prioritizes synchronicity in vision over technical experience has provided a foundation of innovation for Glove, whose sound feels distinctive next to its peers, with the ethos of Brian Eno and beat sensibility of the B-52s. Perhaps that’s why the band has landed opening gigs on tour with sonic legends like Jack White and A Place to Bury Strangers, and slots at festivals like Lollapalooza and Levitation before even releasing its first album, Boom Nights, which is out today.

It’s easy for a synth-heavy band to ride on the haunting allure of overlaying sound and produce a listenable album of near-non-differentiable tracks. Boom Nights is an execution of the opposite approach, its sound bouncing from thumping broody songs to jittery experiments in diffused shout tracks.

In anticipation of Boom Nights, Glove’s Michelle Primiani and Brie Deux joined Document to discuss the album’s conception and the Liza Minnelli-inspired drag queen who adorns its cover.

Megan Hullander: Is the name ‘Glove’ a reference to the Robert Smith and Steven Severin project?

Brie Deux: Not originally, not explicitly.

Michelle Primiani: Yeah, we found that out a little bit later. Rod always had this name in mind, so we kind of just stuck with it. And then people were like, ‘That’s a pretty interesting reference.’ Because we love The Cure and Siouxsie and the Banshees.

Megan: You guys don’t seem to exactly fit into Tampa’s music scene. How has the city impacted your sound? Or has it not?

Michelle: There are a couple bands in Florida that have a similar sound. I feel like there is kind of ‘synth with drum and bass and stuff’ happening in Florida. In Tampa, not so much. We pull influences from everything. We’re constantly researching, learning, sticking to our own guns, talking amongst each other. I feel like, if you just find a small group of people influenced by one thing, you can run with it.

Brie: There was a cool thing in Tampa happening for a little bit—a very small, niche group of house raves. And that was a cool time. But I feel like now, there’s nothing. So we just stay at home. We don’t go out.

“We can’t get pigeonholed, because we can always have a different attack method of what direction we want to go in. We don’t rule out anyone’s potential.”

Megan: You guys have blown up pretty quickly, especially considering your first album hasn’t even technically come out. Do you feel like swapping DIY spaces for bigger stages has impacted the music?

Brie: We love being on the big stage.

Michelle: We want a big production because we have these big ideas, and I feel like when you have synths and backing tracks, you pave yourself a little differently from everyone else. You can just do such unique things that lend their own sound.

Brie: We already have visuals in mind for when that day comes. We have the whole light show. We have big plans.

Megan: How does the lack of a frontman ethos differentiate your sound from other projects?

Brie: Every song is a little different.

Michelle: It just keeps people on their toes. We can’t get pigeonholed, because we can always have a different attack method of what direction we want to go in. We don’t rule out anyone’s potential.

Megan: What is it that ties the songs together as an album, rather than a collection of singles?

Brie: I think it all started with ‘Mirror Image Blue.’ That was the song that started the whole album cycle. That was the first song Rod and Justin ever wrote the first time they got together.

Michelle: They just sat down and wrote that song in one night, and that’s still one of our favorite songs. It’s just an epic band song that is kind of like the heart—the driving force behind some of these other songs.

“There were so many other musicians who Rod could have formed a band with, but he specifically chose us as a blank slate to kind of morph into this one unified goal. We’re pulling influences only from what we know from each other.”

Megan: It’s easy to hear the nostalgic influences that you guys have, but what do you think makes your songs feel more contemporary?

Michelle: I think, just because we’re living in this contemporary time. There is so much information on these instruments, and ways of recording. Even the way we interact in our environments in these like, postmodern times, while trying to capture what’s still in the static. But doing it in our own way, with the instruments that have been available since the ’70s and ’80s, and watching all these interviews about these amazing bands like Kraftwerk and Brian Eno—these post-punk bands that were also doing it.

Brie: I also think that being newer musicians plays a part. Because Michelle and I never played music before our twenties. We’re not classically trained or anything.

Michelle: And Rod wanted that. There were so many other musicians who Rod could have formed a band with, but he specifically chose us as a blank slate to kind of morph into this one unified goal. We’re pulling influences only from what we know from each other. We’re not trained musicians.

Megan: Where did the art for Boom Nights come from?

Brie: My grandmother actually took that photo in 1976. She did events for nightclubs and gay clubs. And she booked a drag show with a couple of her friends in it, and that was one of her drag nights.

Michelle: It was a Hollywood themed night. We think that the person is dressed as Liza Minnelli.

Brie: And it’s funny, because my mom always tells me that I am like her mother. Now, it’s full circle. I never met my grandma, and now we’re using her photo for our album. She was like a nightlife person, so it just made sense. When I showed my mom the photo that we were using, she was like, ‘Wait, I know that person. They would come over after the show for breakfast.’

Michelle: It just had this thing that attracted us to it.

Brie: It’s the perfect moment. There’s something in their eyes that they’re thinking about in that moment. It captured us. 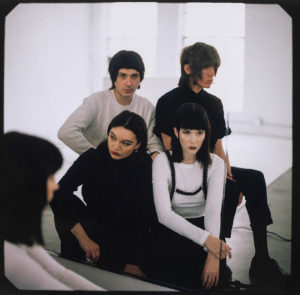