In her new Netflix special ‘The Twist…? She’s Gorgeous,’ the beloved comedian, actor, and “gal about town” makes jokes for the girlies—and anyone who’s the protagonist of their own life

“Who am I?” muses Catherine Cohen, reclining on a velvet chaise that looks like it was made for her. “I’m an entertainer, a slut, a lush… I want to be a movie star, a world traveler, and a taker of many baths. Above all, I’m someone who’s hungry for life, and I want to keep being that way.”

When we meet for coffee in the West Village, she’s fresh off a plane, and days away from premiering The Twist…? She’s Gorgeous: a musical tour de force that sees Cohen command the stage in a pink rhinestone romper, white go-go-boots, and a larger-than-life persona. Starting with childhood home video footage of Cohen hamming it up for the camera, the special takes viewers on an explosive romp through all that she’s experienced on the way to becoming an actor, comedian, and “gal about town”—from cringey adolescent flirtation attempts to fucking frat boys and dry-swallowing birth control while biking on the Williamsburg Bridge. (“I guess I am the voice of my generation,” she quips.)

“I’m an entertainer, a slut, a lush… I want to be a movie star, a world traveler, and a taker of many baths. Above all, I’m someone who’s hungry for life, and I want to keep being that way.”

With longtime collaborator Henry Koperski on the keys, Cohen belts out riotously funny original songs about the absurdity of modern life: including marathon running, the escapist delusion of weekend trips, and falling in love with someone who “couldn’t care if you live or die.” In both musical numbers and comedic monologues, Cohen veers between hyper-confidence and instant relatability—a more exaggerated version of the person she is every day (who, having arrived for our interview dressed in a sumptuous fur-lined coat and signature cat eye liner, reassures me that she intends to spend the day after her premiere party “in bed hungover, eating a bagel off her chest.”)

It’s a practice that is familiar not only to those who make their living onstage, but also to anyone participating in the culture of social media: a landscape that, following the collective rebellion against carefully curated aspirational content, increasingly mines the area between elaborate persona and candid “realness.” Cohen, who has amassed a significant following on Twitter and Instagram, is no stranger to this—she has pioneered the art of confessional tweeting, a skill she jokingly attributes to her own inability to stop talking. “I tried to be cool and reserved once, but it didn’t take,” she laughs. “When I meet someone, I need to know everything about them. I’m like, ‘Where were you born, what’s your mother’s maiden name, what makes you tick, what’s your biggest fear?’” (And it’s true: During our interview, Cohen redirects each line of inquiry back to me with genuine interest, and accidentally asks a stranger several consecutive questions while petting their dog.) 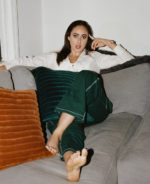 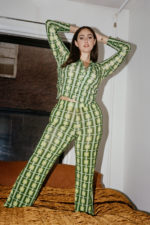 It’s an instinct she channels on her podcast, Seek Treatment, where Cohen joins her close friend, comedian Pat Regan, to interview guests about “boys, sex, fucking, dating, and love”—all topics frequently featured in her advice column for W Mag. (Equally personal is her newsletter, My Sexy Little Email.) In addition to the musical comedy she’s best known for, Cohen is also an actor and poet; when we speak, she has just wrapped up filming Paramount’s At Midnight in Mexico, and last year she published her first book God I Feel Modern Tonight: Poems From a Gal About Town. If you’re getting the sense that Cohen has a lot of irons in the fire, you’re right: “I feel my best when I’m run ragged,” she says of her many projects. “But a boyfriend once said that when I relax, I really relax.”

Male attention has never been uncomplicated for Cohen. While The Twist…? She’s Gorgeous sees her assume the persona of a hyper-confident diva, she was far from comfortable in her own skin growing up—something she lampoons playfully in some songs, and addresses seriously in others. “Boys never wanted to kiss me / so now I do comedy” she sings in the opening act, simultaneously satirizing and indulging in her own desire for attention. As well as poking fun at her teenage self—who Cohen describes as “chubby, Christian, and horny”—Cohen’s act illustrates the enduring impact of oppressive beauty standards in the form of songs like “Take My Money,” a musical number about shopping for plus-size clothes, or a spoken monologue where she mentions having gained weight during the pandemic. (“Which is neither good nor bad, it’s neither good nor bad, it’s neither good nor bad… Can you tell I’ve been to therapy twice this week?”)

“Ultimately, I’m on stage trying to make myself laugh, so this special is for anyone who sees it, and laughs too. It’s for the girlies—girlies of all genders. After all, who doesn’t want a little love and attention?”

In excavating her own mixed feelings about body positivity, Cohen not only expresses herself, but the reality of our cultural moment: a time where the language of feminism has been co-opted by brands, but actual women are struggling to square a lifetime of programming with a sudden pivot toward empowerment. A similar conflict is at play with the romantic norms that have formed her concept of love: “I want to be objectified / I know it isn’t right / I know I’m not supposed to say that,” she sings, aptly capturing the dissonance between knowing what forces have shaped your desires, and the reality of still experiencing them. It’s in moments like this that Cohen’s comedy transcends the boundaries of the individual—because in being unapologetically herself, she reverse-engineers a portrait of the society that made her that way, and invites us to laugh at the absurdity of it all.

In our conversation, she admits that talking about these feelings isn’t ‘cool’—but she does so because, underneath it all, Cohen wants to make people feel less alone. “Ultimately, I’m on stage trying to make myself laugh, so this special is for anyone who sees it, and laughs too. It’s for the girlies—girlies of all genders,” Cohen says. “After all, who doesn’t want a little love and attention?” 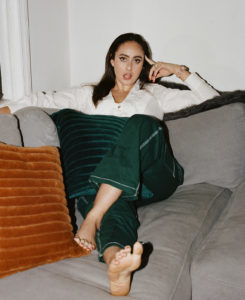 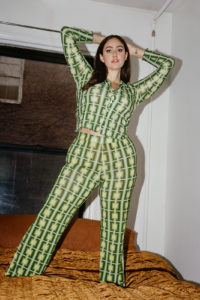