The iconic artist’s newsletter is home to ‘The Melting’—her new longform serial—and a collection of personal videos, poems, and musical livestreams

Patti Smith is on Substack now, and she’s still getting used to it. “Hello, everybody,” she says from Electric Lady Studios in Greenwich Village. It’s where she recorded Horses in 1975; there’s a trippy sort of mural behind her, featuring a rainbow and a big mushroom and a blonde girl gazing over a planet’s horizon into outer space. “You know what’s really funny?” she asks, shuffling around the set. “Usually, when I do my little films for you, I see my face. So I have the illusion that I’m talking to somebody. But now, I can’t see anybody.” She backtracks. “Actually, I see our cameraman. I’m sorry, I didn’t mean to insult you. It’s not like you’re nobody.”

Smith is often referred to as Punk’s Poet Laureate. But even the possessor of such a sacrosanct title isn’t free from the trials of readjustment. It’s curious to see the rockstar—who muscled through the ’60s and ’70s with no money, who made art nearly starving in the iconic Chelsea Hotel, who once broke her neck falling from a stage mid-performance—endeavoring to engage with a silent virtual audience. Smith once said to Vanity Fair that her celebrity confounds her: “What is it that drives me to perform when I can hardly hold my own at a dinner party?”

What’s a livestream event more similar to: an arena of global fans, or an intimate function among friends? The answer has to lie somewhere in the middle, but Smith seems intent on making do. Since the beginning of the pandemic, she’s grappled with the dilemma faced by all musicians, from the up-and-coming to the world famous: What does a performing artist do, if they can’t perform their art?

“Truthfully, I was like a wolf circling about,” Smith told the LA Times on her early days of quarantine. She found relief in writing down some thoughts on isolation, which evolved into The Melting—a serialized longform work, with installments uploaded to Substack weekly, like a modern-day Madame Bovary. They’re spliced with video updates that Smith records in selfie-mode, conversational and rather quirky. Sometimes she’s stroking a cat, or showing off a knick-knack from her bedroom shelf, or pausing to answer a phone call; she titles these inserts, ‘A late hello,’ ‘another late night hello,’ ‘A Video Message,’ ‘A Message.’

The live event that I attended was exclusive to Smith’s Substack subscribers, but hosted on Mandolin—a virtual concert venue created specifically for artists wanting to perform in the wake of the pandemic. The date was 2-2-22, and Patti was pleased about it; it was “a day of power, and also a night of power… a good, weird place.”

Smith alternated between colloquial addresses to her audience, readings from her books and other texts, and pared-down musical performances featuring Tony Shanahan and Lenny Kaye on the piano and bass. She sang “Grateful” and “Free Money,” and went on about the Year of Tiger, and William Blake, and her old friend Allen Ginsberg. At one point, she had someone off-camera find a copy of Janna Levin’s Black Hole Survival Guide in her coat pocket. She held it up to the camera, asking, “Don’t you feel sort of like we’re in a black hole right now? Some giant, tubular experience that’s taking us into—not even another dimension, just some weird place.” She was totally frank, as the night wore on: “I feel like I just drank three cups of coffee.” “I promised everybody that I would wash my hair for this event—and I think you can see that I have washed my hair.” Forty-or-so minutes in: “I feel like we’ve been here for hours. It’s the black hole syndrome.”

“Don’t you feel sort of like we’re in a black hole right now? Some giant, tubular experience that’s taking us into—not even another dimension, just some weird place.”

I spent the night clicking the red heart emoji, which sits in the corner of the Mandolin interface. There’s also a fire emoji, and one of applauding hands. When clicked, they rise from the bottom of the screen to the top—a virtual version of snapping, poetry-slam style, or of a little cheer. I found myself wishing they made noise—especially at the end of the show, as Patti signed off. “I’m very conscious of you,” she said to her Substack community. Viewers were sending sweet messages, but she couldn’t see them at the time. “I know it’s kind of funny for us. You do something, then it’s kind of quiet… [But] I’ll be seeing you very soon, in your email. I’ll be popping up, like a bad penny.” A few people in the studio clapped, three or four times. The screen went dark, save for the Mandolin logo and a Thank you for watching! message.

The Melting is a good read. And despite the poignant circumstances, Smith was fun to watch. She came across as very genuine—a very real person—which is probably the biggest benefit to platforms like the ones she’s landed on. It doesn’t feel like you’re face-to-face with Punk’s Poet Laureate—more like Punk’s Poet Laureate is sending you biweekly texts. But despite the distance, she bears down and powers through: “[We have to] reclaim our desire to work. Our desire to do good work. Our desire to extend our hand to each other. We’re still gonna have to navigate all the changes in our world… And yeah, I feel ready. So happy new year to everyone.” 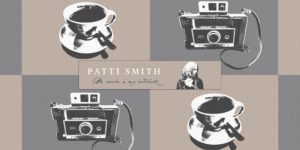