Alongside co-entertainer Jorge Buccio, the singer has enchanted diners at Puglia Restaurant for fifteen years

On a late summer night in August, I met Debra Ente for the first time. She was adorned with pink glitter, I was adorned with splotches of red wine and marinara. We met at the Little Italy mainstay, Puglia, where Debra can be found most nights singing to throngs of recently graduated Big Ten alumni, mid-tier JPMorgan execs, New York first-timers, and Yelp hobbyists. As they pick at haphazardly assembled Caesar salads and slurp red sauce, Debra entertains them with the musical stylings of Sinatra, Bennett, and ABBA. Paralegal by day, entertainer by night, Debra has been singing at Puglia for 15 years along with her co-entertainer Jorge Buccio, who’s clocked in a 35-year residency on Hester Street. The pair encapsulates everything I love about Little Italy.

For me, Little Italy has never been about Italian food, and this is no exception at Puglia. Instead, what Debra, Jorge, and the neighborhood as a whole provide is unbridled entertainment with a heavy dose of kitsch: a Disneyland experience of sorts or, rather, a perfectly campy daydream that delights you as much as you let it. In the spirit of authentic inauthenticity, neither Debra nor Jorge are fully Italian. Debra, a self-proclaimed “Jewish girl from Brooklyn,” is from Sheepshead Bay, while Jorge hails from outside Mexico City, where he cut his teeth as an entertainer, later becoming a seasoned Elvis impersonator. Yet with their warm demeanor, distinctive style, and dedication to the art of performance, they are the crown jewels of Little Italy.

I spoke to Debra about her beginnings in Little Italy, her style philosophy, and the makings of both an entertaining show and outfit. The evening I visited Puglia to meet up with her, a few weeks before Christmas, I arrived early and sat in the corner by the window among the plastic poinsettias and paper snowflakes. As I waited for the show to begin, I was reminded of my last experience there, after which I awoke in the middle of the night haunted by dreams of Chicken Francese, and tongued the garlic bread gashes left on the roof of my mouth. As 7 p.m. approached, Debra came out to greet me as she always does, with a huge smile and a burning question: “Are you hungry? Can I get you something to eat?”

Vanessa Anderson: How did you get your start at Puglia?

Debra Ente: It was an interesting thing that happened to me. I had never heard about Puglia Restaurant and I was surprised [to learn] it’s been around since 1919. One of my neighborhood friends used to make the pizza over there, back when they had a brick oven, and he knew I was a singer. He mentioned I should stop by, so I did, not knowing there was any music there at all. The second or third time I stopped in was during the San Gennaro Feast, and I was introduced to Jorge Buccio, my singing partner. That night, he was playing outside and it was so exciting to me—everyone was sitting around watching, there was such an energy! Someone mentioned to Buccio that I was a singer and he asked if I’d like to do a song with him. I’m not pushy, and I’m not one to go to places and throw myself on stage, so I was a little hesitant—but I ended up getting up and singing Cabaret with him. That was in 2006. Before you know it, I’m singing with him almost every night. He wasn’t even looking for a singing partner, it just kind of fell into place.

Vanessa: When did singing start for you?

Debra: Since I was young, I was in the chorus at school. I’m from Sheepshead Bay and I still live in the neighborhood. In my twenties I linked up with a wedding band and we did gigs here and there. Yacht clubs, bar mitzvahs, weddings, but it fizzled out after a while. So while my friends and family always knew me as a singer, Puglia was my first real, and not to mention longest, singing opportunity.

Vanessa: What have been your favorite moments over the fifteen years?

Debra: We did a little cameo on “Long Island Medium” with Theresa Caputo, which was so exciting. Oh! You know what was the biggest highlight? We didn’t even know they were going to be there, but Ralph Lauren came in with his wife and daughter to celebrate her 40th birthday. All of a sudden, this beautiful ice sculpture was wheeled out from the back and we were thinking, Who is that for? They got up and danced and had a great time. Singing for Ralph Lauren was more exciting than being on Long Island Medium. He’s iconic. 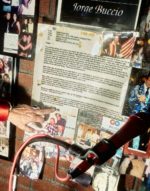 Vanessa: Has the neighborhood changed?

Debra: Little Italy is the same, just shrinking. It has retained the same attitude. Everyone is very friendly, very accommodating. We don’t get too many stuffy people, we get people who want to have a good time. We also get families that come back year after year, especially around Christmastime.

Vanessa: I feel like a big part of the show is your wardrobe, and you have such a showmanship to your style. How do you think about getting dressed for the evening?

Debra: Ever since my teenage years, I’ve loved to get dressed! At Puglia we’re the main event, we aren’t the music in the background; it’s almost like an Italian cabaret act, and we have to dress the part. I think a performer should always look like a performer. I’ve always loved gowns for singing. I gravitate towards glitter and sparkle, every color. Light blue, baby blue, pink, I love them all. Also, I’m not singing on a big stage like Carnegie Hall. I’m singing to people up close, right in front of me, so everything needs to fit just right. I actually keep a lot of my dresses at Puglia, there’s a little closet room in the back. On Friday and Saturday nights, I actually do an outfit change midway through the show. I’ll wear a longer gown in the beginning, then switch to a shorter dress. The crowd loves it, they go wild.

Vanessa: You’ve lived in New York all your life. What’s a piece of advice you’d offer to a city dweller when it comes to getting dressed?

“At Puglia we’re the main event, we aren’t the music in the background; it’s almost like an Italian cabaret act, and we have to dress the part. I think a performer should always look like a performer.” 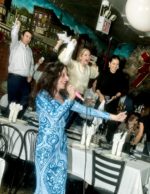 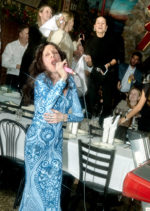 Debra: With a good seamstress, you can make every dress look like it was made for you. It will change your life. I’m friendly with the woman who’s the seamstress for “The Phantom of The Opera” on Broadway and she does all my clothes. Her name is Margie Marchionni. You can buy [your clothes] from anywhere.

Vanessa: Any suggestions for those looking to add an element of drama to their style?

Debra: You have to be confident in yourself. If you’re going to walk around and be afraid of what people think of you, you’re never going to get anywhere. I wear what I want to wear—this is me. I can’t make myself different

Vanessa: Who inspires you, style-wise?

Debra: My number one [style inspiration] of all time is Chita Rivera. I’ve actually met her a couple times. The last time I saw her, she recognized me and said, “You’re the girl with the dresses!” I love Cher, ABBA—anyone who has their own style, in music and fashion.

Vanessa: You’ve been performing at Puglia for over a decade. Do you plan on staying? What’s your dream?

Debra: I would love to be onstage somewhere like Las Vegas, or Broadway even… Doing a one-woman show with a beautiful orchestra behind me. 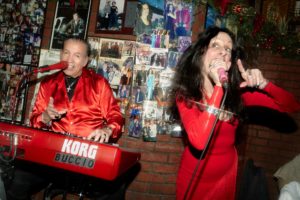 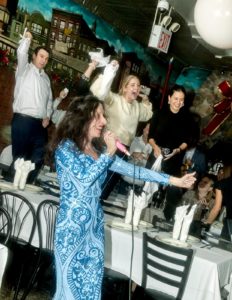 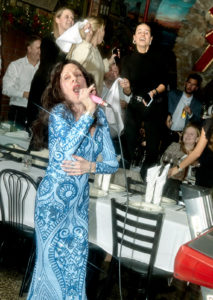 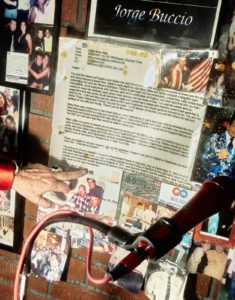 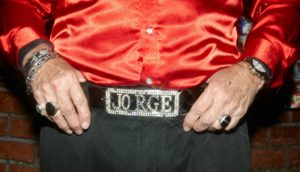 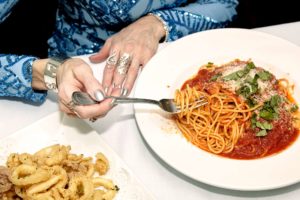