In conversation with Document, Chris Stewart breaks down his latest album and makes the case for ‘mood music’

The act of listening to an album in its entirety is a near-lost art form—mostly practiced by melophiles clinging to the “good ol’ days,” assholes with a misguided sense of authority that places them above streaming, and twenty-somethings with pristine collections of cheap reissues they play on Crosleys purchased from Urban Outfitters.

Chris Stewart, the mustached man behind Black Marble, has higher expectations of his listenership. He still has faith in the teenage angst that forces a kid to the bedroom floor, lost in the daze of an album that’s listened to in the way it was intended—without shuffling or skipping. His fourth and most recent album, Fast Idol, was built on this optimistic belief. The songs serve as parts to a whole, an entity greater than any individual track. While “Streetlight” offers a hit-single type of intrigue, it offers far more in conversation with its peers. Its experimentation provides a somewhat hypnotized listener an opportunity to shift their line of thought.

Pitchfork’s review of Fast Idol found the album largely redundant, classifying it as “mood music” that was merely a collage of the past. Perhaps, when listening, Pitchfork did not achieve Stewart’s ideals of listenership. Perhaps, instead of listening to the album as supplement to the experience of wandering, reading, and living, Pitchfork listened with intense examination, rewinding and fast forwarding until finding just the right exaggeratory adjective. Stewart did not read the Pitchfork review and so, when he decided to join Document to discuss the album, I took the opportunity to share a few theories regarding it.

Megan Hullander: According to Pitchfork, ‘Fast Idol is a record of makeout jams; the kind of druggy, pupil expanding synth-pop that you leave on so you can tune out. There’s nothing wrong with making mood music, but these songs often feel indistinguishable from each other.’ Isn’t all music mood music?

Chris Stewart: I think it would be weird if music didn’t carry some sort of sense of mood. I don’t even know if that would be possible. The fact that you’re saying they called it mood music—I don’t know how to respond. It kind of reminds me of the way that Spotify is trying to classify everything by mood. And I don’t know if this is a person who is just, like, very online. I guess that would be a compliment, like my music is good for the algorithm?

Megan: ‘At his best, Stewart is an archivist of past sounds.’ Isn’t all music the product of other music?

Chris: I hate to criticize some of these criticisms. I can see somebody saying that, but honestly, it feels so uninspired for that to be your take on my music. It almost feels like that’s what Google would algorithmically write. All music is, at least in some part, inspired by music of the past. So in a sense, I guess anybody is a sort of archivist.

Megan: ‘It sounds exactly like something that would be played in a club or on the radio in 1980s London.’ Are you sick of being lumped in with decades-old British synth-pop?

Chris: I think it’s inherently a bad faith argument for someone who’s doing criticism, because I can only assume that was meant kind of pejoratively. It feels like a bad faith argument to me in general, because Pitchfork [doesn’t] call every single guitar record that they give a good review to ‘’60s guitar.’ But they call anything that uses a synthesizer ‘’80s synth.’ It’s a very American take, because new wave was very popular in the early ’80s and then fell out of favor, whereas in Europe, it was more a part of the lexicon of music from its inception till today. So people don’t think of it as a novelty. It’s sort of weird that someone who’s literally getting paid for their opinions would have a very basic vibe of what it is.

Megan: ‘It’s an enjoyable, sexy record that is little more than a composite of its influences.’ Do you have contemporary influences? Or contemporaries at all, in terms of the type of music you are making?

Chris: It’s weird, because I don’t think I fit into anything. There are a lot of dark wave bands on the West Coast and [when I moved to LA] I got lumped in with that. I don’t really feel like those are my influences. I didn’t like being lumped in with it, because I didn’t want my music to be seen as homage-based. That’s another thing that was kind of weird about that review—I feel like I tried really hard to not have my music be a pageantry of revisiting a certain thing.

Megan: ‘The results are often really lovely, if not slightly repetitive.’ The repetition feels intentional, sort of trancelike. Is there purpose to it?

“Fast Idol is sort of supposed to be a joke. It’s the idea that there could be a time when people’s spirituality is disposable and compartmentalized and fungible.”

Chris: I was a latchkey kid. I would come home, be alone for hours, and just listen to a lot of music. I was a nerdy little preteen audiophile, with a very nice stereo in my room. I would sit there and read magazines on my bed and I would have full albums playing in the background. I really got used to this feeling of being by yourself, listening to a record from start to finish, and maybe not even necessarily paying attention to it intently. But there would be moments or songs where you would stop doing what you were doing. And there would be moments where it was just kind of in the background, while you were doing something else, which could be sort of hypnotic. I feel like it influenced the way that I wanted to make music; I’m making it for that person. I don’t even know if that person still exists, because the way that we consume music is so different now. But I’m still making it for a person that would sit there for an hour, and just have it on while they’re staring off into space, thinking about their day.

Megan: ‘Though the song could’ve been on any of Stewart’s records, it is nonetheless undeniably pretty.’ Fast Idol feels different from your past records. Is it?

Chris: I’m always coming up with different strategic frameworks, out of which an album emerges. For this record, I think what I wanted to do more than on previous records, was instead of creating like, verse, chorus, bridge kind of structures that would make me feel like I’d successfully created a good song, I was more going with how a particular loop made me feel. And then if I liked how that felt, I would just try to ride that out. So I think this record is mood music.

Fast Idol is sort of supposed to be a joke. It’s the idea that there could be a time when people’s spirituality is disposable and compartmentalized and fungible. Like an app like Pokémon, where you collect them all, but [instead] you’re collecting religion or faith—something that your entire being is structured around. Because typically, we’re this empty void of consumption, but we have one sort of philosophical framework that we’re attached to for our entire lives. 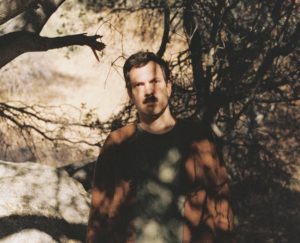 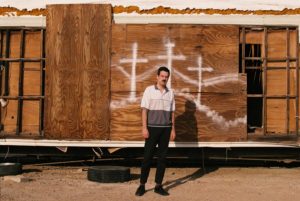