For Document, Joe Talbot and Mark Bowen discuss the making of ‘Crawler’

These are monstrous times, and IDLES are a brawny and necessary monster. Frontman Joe Talbot growls in an exaggerated accent with an anger that is uniquely tender: every eye bulge an expression of wild affection and every lob of spit a staunch declaration of comradery. Guitarist Mark Bowen bulldozes into crowds in forward facing trust falls, enveloped into the arms of the Bristol band’s adoring disciples. A disgust with the world’s facismistic tendencies broil into catastrophic performances that leave fans dripping in sweat that isn’t their own and security craving Xanax.

Crawler, their fourth studio album, is no exception in a wave of COVID productions driven by inward intimacy. That intimacy may seem surprising coming from a group of burly Brits known for their wrathful engagement in concepts of social inequities and political misgivings, yet for those familiar with the ethos of IDLES, the evolution makes perfect sense. To properly engage with concepts of global injustice requires such examinations of internal turmoil. The album is previewed with a single, “The Beachland Ballroom,” in which listeners are offered alternative ideations of the band’s identity, but the song still throbs with a sound that is distinctively IDLES.

Time away from touring has only strengthened their aggressive affection for their fans—one that feels distinctly paternal, despite an outwardly gruff demeanor. They encourage their audiences to let loose, be free, push themselves to be better humans, to feel rage for themselves and for others. The band’s general philosophy seems to be derived from a hyper-idealistic parenting book.

But IDLES are not your dads. “As a father, I can say, one person’s enough to look after,” Talbot explains vehemently. “We’re not responsible for our audience like that.” But for fans on the receiving end of a constant verbosity of pride and gratitude, it’s hard to entirely abandon the idea that they sort of are your dads, that their rough exterior holds paternal sentiments.

At a steel picnic table on the roof of midtown Manhattan’s Terminal 5, Talbot and Bowen are unusually dry. It’s pre-performance and for the moment, the air is cool and there is not a pit stain in sight. As warm bodies pool into the venue below, ensuring our soon-to-be-imminent sweat, the Bristol band joins Document to discuss Crawler and deny their obvious dad status.

Megan Hullander: As you grow and are playing spaces that are getting bigger, how do you maintain a sense of intimacy with your fans?

Joe Talbot: This is all we know now because it’s been so long. I think the sense of intimacy comes from our vulnerability and our collective sense of opening ourselves up as a performance. When you allow yourself to be vulnerable on stage, the fuckers at the back and doing the same thing. And I know for a fact that they are dancing and enjoying themselves. I’ve never felt a lack of intimacy with our audience.

Mark Bowen: I genuinely think it’s getting easier as it gets bigger. There’s a critical mass that happens with the collective identity of an audience. If there are only 400 people you might feel your individualism kick in. Whereas the bigger it gets, there’s a positive energy that we’re given that energy cycles through. There’s real collective energy when you’re around people that are uninhibited.

Joe: The best gig I’ve ever been to was Blur. And that was the most intimate, freeing, and beautiful because of the magnitude of it. So you’re right. We’re gonna be Blur, aren’t we?

Megan: So much of your identity as a band seems rooted in the crowds and live shows. How did that affect the writing process on this last album?

“We’re ready to make an album for us and us alone with no sense of benevolence.”

Bowen: There’s a context, knowing that you’re playing a big room that constantly goes into the writing. Even Ultra Mono was written because we were playing these bigger rooms. Having that context deprived opened up the opportunity to write a song that didn’t ever need to be played live, just needed to be a song on the album.

Joe: It changed our perspective on what a song can be. We’ve always had a sense of live shows in mind. Because the rooms are getting bigger, the songs are getting bigger, augmented with more space between notes, but everyone plays the same note, less cacophony that way with reflection and bigger spaces. But what we then had was no room, and then introspection, and conversation between ourselves about who we want to be as artists. And that was the perfect year in between us both becoming fathers to spend time reflecting on who we truly want to be. We’re ready to make an album for us and us alone with no sense of benevolence. Everything up to that point had momentum because it was from our experience feeding back into the live show. That’s a beautiful thing. But without all of that, we could only look inwards. And that’s when it flourished.

Megan: How’s it been performing the new songs? They sound so different from the rest of your work, do they feel different?

Joe: He’s got the most work to do because he’s playing five instruments.

Bowen: It’s a lot of concentration.

Bowen: It’s less of a performance.

Joe: And more of a performance.

Bowen: But the performance isn’t about gestures or gesticulation or trying to pull something from the audience by communicating through body language. It’s distilled down into communicating and performing through the music.

Joe: Which is kind of what we’ve been looking to do for twelve years. We were selling out London shows without an album. We hadn’t released anything yet, but our live reputation was great. So that we had something to build on. That’s why the snowball effect after our first album, Brutalism, was so successful. They didn’t care what we were playing, they just came to see us spit and dance. All of our heroes are the marriage of intricate music and theater. Nick Cave, Radiohead, Thee Oh Sees all have that sense of fury and hugeness of presence on stage. And their music has nuance and brilliance. And you can go away and listen to the record, and discover something new every time. And the last few years have given us that breadth to be able to explore that side of our music and get closer to what we want to be.

Megan: And how was it writing together but separately?

Bowen: That’s kind of it. We tried to write together separately and couldn’t. So it ended up being that we’ve just grown separately. The context for us writing a lot of time would be either on stage in soundcheck or a rehearsal room together. And you can get nervous showing something right away. Whereas with this type of writing, we were able to prime each other and focus on the intricacy and the nuance to make sure that the sense of the song was there. We had lots of conversations about what a song would be before any notes were played.

Joe: We’re both very reactionary. I’m reactionary in an emotionally immature way. Bowen can get annoyed because his brains worked it all out, but he can’t explain it in layman’s terms to someone like me. But with the remote nature of the album, we had that time and space to be like, I’ve written this, I’ve got this idea, and it’s well thought out and there’s no immediacy to it. And that suits both of our personalities.

“If we could learn some collective patience for each other and ourselves, I think we’d be able to be a jam band. But I would have to be out of the room or have some fucking nicotine injections.”

Bowen: It allowed for everything to be considered. I think that makes sure each song’s identity, every single aspect of the song has a very assured sense of identity within it.

Joe: But there’s nervous energy around the five of us being in the room sometimes and that pushes us to have a lack of patience. We’re very fucking brutal. A lot of people wouldn’t be able to work with us. There are no niceties. That allows for speed. It isn’t necessarily what’s best for us. If we could learn some collective patience for each other and ourselves, I think we’d be able to be a jam band. But I would have to be out of the room or have some fucking nicotine injections.

Megan: Crawler is maybe more experimental than your other albums. Were there any insecurities you felt in putting it out?

Joe: Personally, what I get from Bowen and myself is a sense of confidence. I couldn’t give a fuck about any reviews of this album because I genuinely love it as a fan. I wouldn’t have concerns, but I’d be interested to see whether this elevates or depletes our live audience. This is objectively our best album because it’s the truest piece of art that we’ve made.

Some of our songs would be better if I was in a better place. Either sober or at least in therapy. But I wasn’t. I had time to reflect on it and had therapy during that time and know that this is our truest piece of work. And the most pleasurable because we’ve got to learn how to talk to each other and communicate creatively as well as practically, which is something that we’ve been trying to do for ages.

Megan: And do you think I have that confidence that comes from having a super devoted fan base?

Joe: Our audience, from what I see, is a bit like us. It’s a hodgepodge. It’s not like we’re united in a hardcore scene yet or a hip hop scene or rock scene, punk scene. It’s expansive, it’s all over the place. It gives you confidence in being able to explore.

“We’re there to create an arena where everyone feels safe to express themselves—which means there’s no fucking room for fascism or anything that leans towards that, but what there is room for is open-mindedness.”

Megan: Some years ago you called yourself like a dad band, and I think there’s something to that in your relationship with your fans. Is that something you feel or am I grasping at straws?

Joe: We care about our audience in the same way they care about us. As a father, I can say, one person’s enough to look after. We’re not responsible for our audience like that. Just because I have a microphone… It’s kind of bullshit. It’s not a conversation and everyone there doesn’t agree with me. It’s not a soapbox. I’m not a politician, I’m a musician. We’re here to create a sense of safety to have fun. And if there’s one guy, with one ego, spouting his opinions, that’s bullshit. We’re there to create an arena where everyone feels safe to express themselves—which means there’s no fucking room for fascism or anything that leans towards that, but what there is room for is open-mindedness. They’ve given us that strength and allowed us to just want to give that back. That is, to me, the purest sense of community.

We’re not fathers. Well, we are, but we’re not [fathers to our fans]. Being a father is a huge responsibility; I see this more as comrades, friends, people that have the same temperament. It’s not even the same political leanings. You don’t understand all your privileges, you can always learn more. You can always have more conversations with the outside world. The more people you let in to have that conversation, the better. I see it more as just being a tiny part of something much bigger than yourself. But that’s been built by everyone in that room, not us. We’re only there because they’re there. 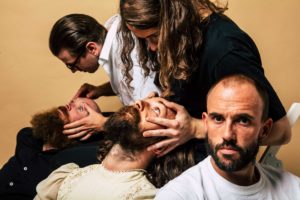 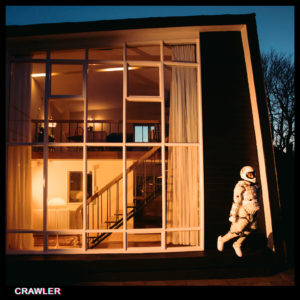 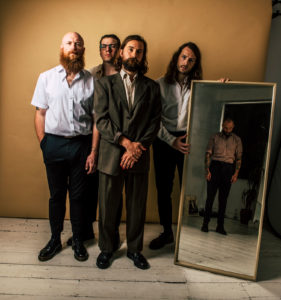 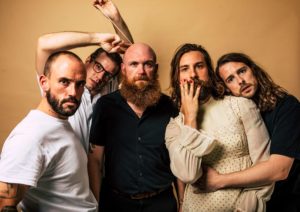