For Document, the directors of ‘Karen Dalton: In My Own Time’ discuss the late singer’s legacy

Sometimes, Nick Cave’s elongated forehead can be found pressed into his steering wheel at the side of the road, eyes teary and mood distinctly pensive. It’s Karen Dalton’s voice that brings his driving to a halt. Her mournful croons demand their listener’s entire attention. Even the mindless movements that driving entails prove too much for what she needs devoted to her. And for those brave enough to try balancing both, as Cave sometimes is, the road becomes smeary behind the tears she mercilessly drags from their eyes. And so, as Cave sometimes does, the helpless listener must pull over.

Dalton’s voice crackles as if transmitted over a radio that’s almost out of range, carrying the type of wisdom you’d only otherwise expect to hear from a monk whose age surpasses that of the most expensive of wines. In true folk fashion, Dalton brought an authenticity to music and lyrics that weren’t even her own. With a reputation similar to the likes of the cult musician Daniel Johnston, she was tortured by her talent in a way that only other tortured-artist types were capable of immediately appreciating. Her life went largely undocumented, and so her story resulted in Bob Dylan-esque myths and two-dimensional understandings of her character.

After discovering a jukebox at a bar in Brooklyn that held the folk greats like Fred Neil and Tim Hardin, yet exempted Dalton, directors Richard Peete and Robert Yapkovitz set themselves on a mission that many eager filmmakers had tried before, but never succeeded in doing: they would dig incessantly until they had enough material to make a Dalton documentary. She needed to be widely known, to be introduced to generations unfamiliar with her genius. Thus, the birth of their film, Karen Dalton: In My Own Time.

Executive-produced by Wim Wenders, the documentary paints Dalton as a character more complicated than the victim she’s often painted as. Pieced together with recovered journal entries, archival footage, and conversations with loved ones, a Dalton unseen in previous reputations emerges. In anticipation of the film’s opening in theaters October 1st, its directors join Document to discuss the late icon and the false mythologies surrounding her.

Megan Hullander: Is there a moment you can recall where Dalton became important to you?

Richard Peete: We were working on a film together in Branson, Missouri, the Debra Granik film Winter’s Bone. Rob and I were doing the props and we were in rural Missouri driving around in a cargo van sharing music, and realized that we both love Karen.

Robert Yapkowitz: It started with a lack of accessibility. We were trying to play her music on a jukebox and we couldn’t. That conversation evolved into the idea that music documentaries have helped bring certain artists to the forefront, for these great artists like Daniel Johnston and Townes Van Zandt. Their documentaries were a huge part of getting the eyes of another generation on them, and realizing how important they were. We wanted to do that for Karen.

Megan: It’s interesting that you bring up Daniel Johnston because I feel like Dalton is similar to him in that her following started largely with big name artists in the same way his did. Aside from her own aversion to it, do you think there was anything restricting her from reaching the notoriety she may have deserved?

Richard: Karen was a musician’s musician. She’s always been painted as this tragic figure. She had a sad story, yes, but we tried to avoid making her feel tragic in the film. She did things on our own terms and that was during a time where that wasn’t totally acceptable, especially for women. She wanted to record it her way, with the people that she wanted to record with, on her time, and that ultimately hurt her from being a “successful” musician.

“Karen was a storyteller, and she liked getting into some of these things that made her more eccentric and helped build the myth of who she was.”

Megan: There are a lot of falsities surrounding her story. I’m curious as to what myths you encountered in the production of the film.

Richard: Her Wikipedia might even still say that Karen died homeless on the streets of New York. And that just wasn’t the case, which was an exciting discovery to make. She had a small mobile home up in Woodstock and a group of friends that she was playing music with there until the last few years of her life. Another one was that she had to be tricked into recording her first record. The story was that she was convinced to play one song in the studio for a producer. He turned the tape machine on, and she ended up playing a full set. But, we found out that was pretty unlikely. She did studio demos at Capitol Records and home demos for the album. You can hear her chit chatting in the background on some home demos about how she really wants to record certain songs.

Robert: Karen was a storyteller, and she liked getting into some of these things that made her more eccentric and helped build the myth of who she was. She wasn’t full Bob Dylan making things up, but I think she leaned into some of the stories and folklore about her. 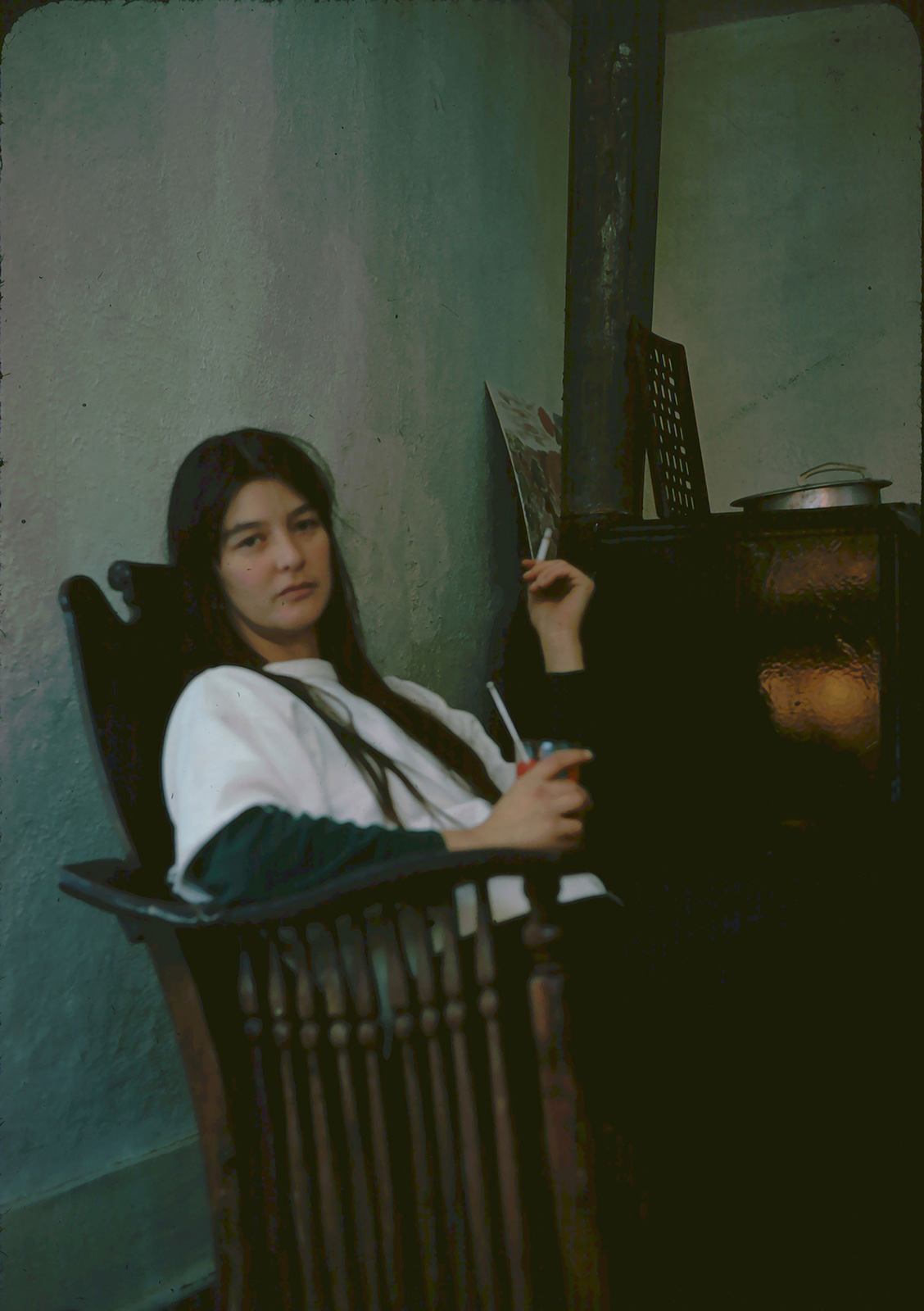 Megan: Did her philosophies in approaching art bleed into the way you approached constructing the film?

Richard: We’re obviously listening to Karen the entire time, and we were imagining her in the edit room with us, trying to predict decisions that she would make, or try to make it more artful or weird. It was very important to us for her to have a voice in the film. We ultimately decided that including some of these journals, diaries, and poems, was the most accurate way to get Karen’s voice into the film.

Robert: There’s a fluidity to Karen’s music that I think we really tried to stay in sync with as far as the pacing and the editing. There are these two sort of contrasting elements of Karen’s personality—this confident strength that she had, versus this fragility. You can see that in the conflict she has between geographic locations as well. She’s torn between New York and Colorado, and we used those locations in the movie as a storytelling tool to show that conflict. If you notice in the movie, it’s New York, Colorado, New York in the way it’s structured.

Richard: We were almost chasing her around. We were out in Colorado at her cabin there, in her hometown, and up into Woodstock. We broke into the trailer that she lived and died in.

Megan: Those journals are some of the most striking parts of the film. What about Angel Olsen did you think suited reading those entries?

Richard: It was the way Angel uses her voice as an instrument, she has an immense amount of control and can use it in a very unconventional way. So I think we knew right away, that she would be able to manipulate her voice in a minor way that we needed in order to sort of read these to evoke certain emotion. And then her music can sometimes be pretty serious and heavy, but there’s also a playful element to it. And she’s got a very sort of humorous part of her personality that just lends itself to these journals, which are essentially the same thing. They are covering heavy subject matter, but they’re playful and abstract, and some of them even feel nursery rhymes.

“People were real, and we didn’t feel like they needed to try and manipulate them to get like tears.”

Megan: The emotion that comes through in those readings doesn’t necessarily come through as explicitly in interviews with her daughter Abby, and the people who were close to her. Was that intentional?

Richard: We’re going out interviewing these people just expecting them to start crying and telling us these emotional stories. That was what we thought a documentary was supposed to be like, and when we weren’t getting that we were like, “Oh, shit, like this, there’s not going to be any emotion, even though she had such an emotional life.” But then, once we got into the edit, we ended up really liking that. People were real, and we didn’t feel like they needed to try and manipulate them to get like tears. Abby doesn’t ever get emotional talking about her mother, but there’s so much emotion when you’re looking into her eyes. You feel this wall that she’s putting up. And it was something that ultimately we leaned into.

Megan: And do you feel like there was any sense of urgency for you and telling the story?

Robert: We started a long time ago, so there was more urgency at that time. She’s become way more popular in the years since we’ve started making the move. But it feels perfect timing for the documentary now with the Light in the Attic 50th anniversary release and the release of some of her demos from Colorado.

Richard: One thing we lost sight of while making the documentary was by year three, it felt like we were making a documentary about our friend, and that nobody knew who she was. And then once you make the documentary, everybody who is a fan is coming from the woodwork. Every time we reached out to someone for help around the film, they would turn out to be diehard fans. It was cool to not have to try and sell her. We were in a hotel in Marina, California, and a Karen song came on in the lobby and there was this sense of pride, like my friend is playing.