beabadoobee is leading the ’90’s revival

Combining nostalgic sound with the DIY intimacy of bedroom pop, the singer serves up dreamy grunge for Gen Z

“[This is] the type of song you listen to when the homies aren’t around,” writes one Youtube commenter on the music video for “Care,” the vibrant opener for beabadoobee’s latest album Fake It Flowers. “[It’s] the type of song you’d hear in an indie movie,” says another. “Which you’d pause immediately just to Shazam the goodness that you’re hearing.”

That goodness is the voice of 21 year old beabadoobee (real name: Beatrice Kristi Lause), a Filipino-British musician who first garnered attention for her 2017 song “Coffee.” Recorded in her childhood bedroom and released under her former Finsta handle, the viral track launched her into the spotlight, even earning her a record deal with Dirty Hit (home to the likes of Rina Sawayama, The Japanese House, and the 1975.) It now boasts over 50 million streams on Spotify, having reached even broader audiences after it was sampled by Powfu in his hit track “Death Bed (Coffee For Your Head).” Featuring the soft vocals of “Coffee” paired with the Canadian rapper’s lo-fi beats, the remix blew up on TikTok and racked up over 4.1 billion plays in the month of March 2020 alone, even becoming the soundtrack of a Dunkin’ Donuts commercial. Originally uploaded for the ears of a few close friends, it was the first song Bea had ever written.

In the few short years since she recorded “Coffee,” beabadoobee’s repertoire has expanded far beyond bedroom pop ballads to encompass a musical sensibility straddling the line between pop, grunge, and indie rock. Full of catchy hooks and ’90s teen nostalgia, beabadoobee’s debut album Fake It Flowers was released in 2020 to critical acclaim, earning her the NME Radar award. When we connected over Zoom, she had just released her brand new single “Last Day On Earth,” a post-apocalyptic reflection on how she would have spent her last normal day, had she known we were heading into a global lockdown. It’s the first track on her new EP Our Extended Play, which she wrote and produced this summer with labelmates and collaborators Matty Healy and George Daniel of the 1975. “We’re all friends, and collaborating with them was one of the nicest musical experiences ever—just a really comfortable atmosphere from the get-go. We all wrote and recorded it together out in the countryside, staying together on a farm with my band and Matty and George. And lots of dogs.”

When beabadoobee caught up with Document, she was on a walk in the park near her London home. “I take a lot of walks these days,” she says, recalling how it got her through the early months of quarantine. “Creatively it’s been up and down; I usually write based on experience, and right now you can’t really experience anything [due to the pandemic]. I’m currently writing about my life and how I’ve started to appreciate things more. So I’ve been trying to write happier songs, especially with this new record with Matty—in a way to feel like there’s a bit of escapism from this weird mess.”

“I wanted to make sure people knew the real me from the beginning.” 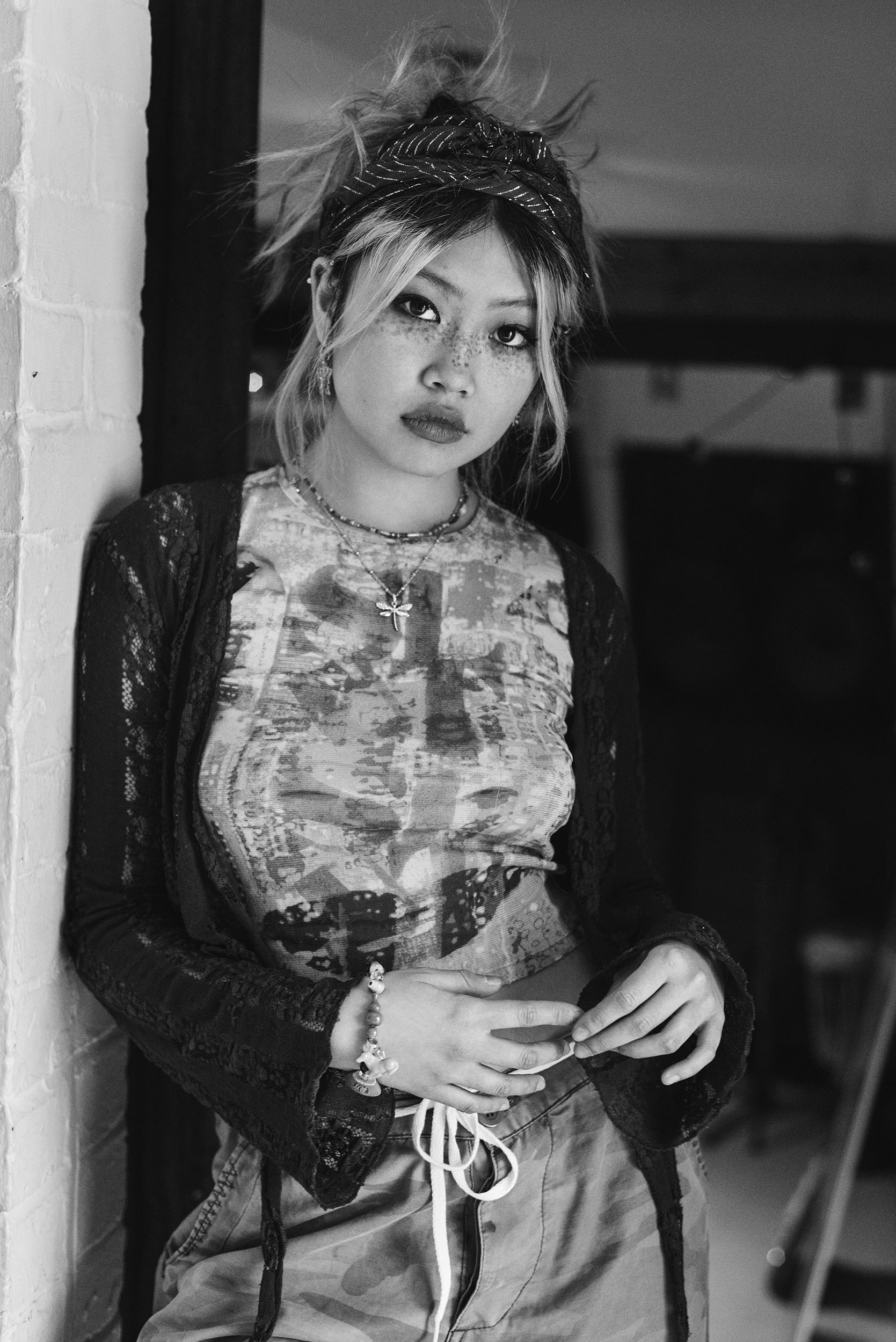 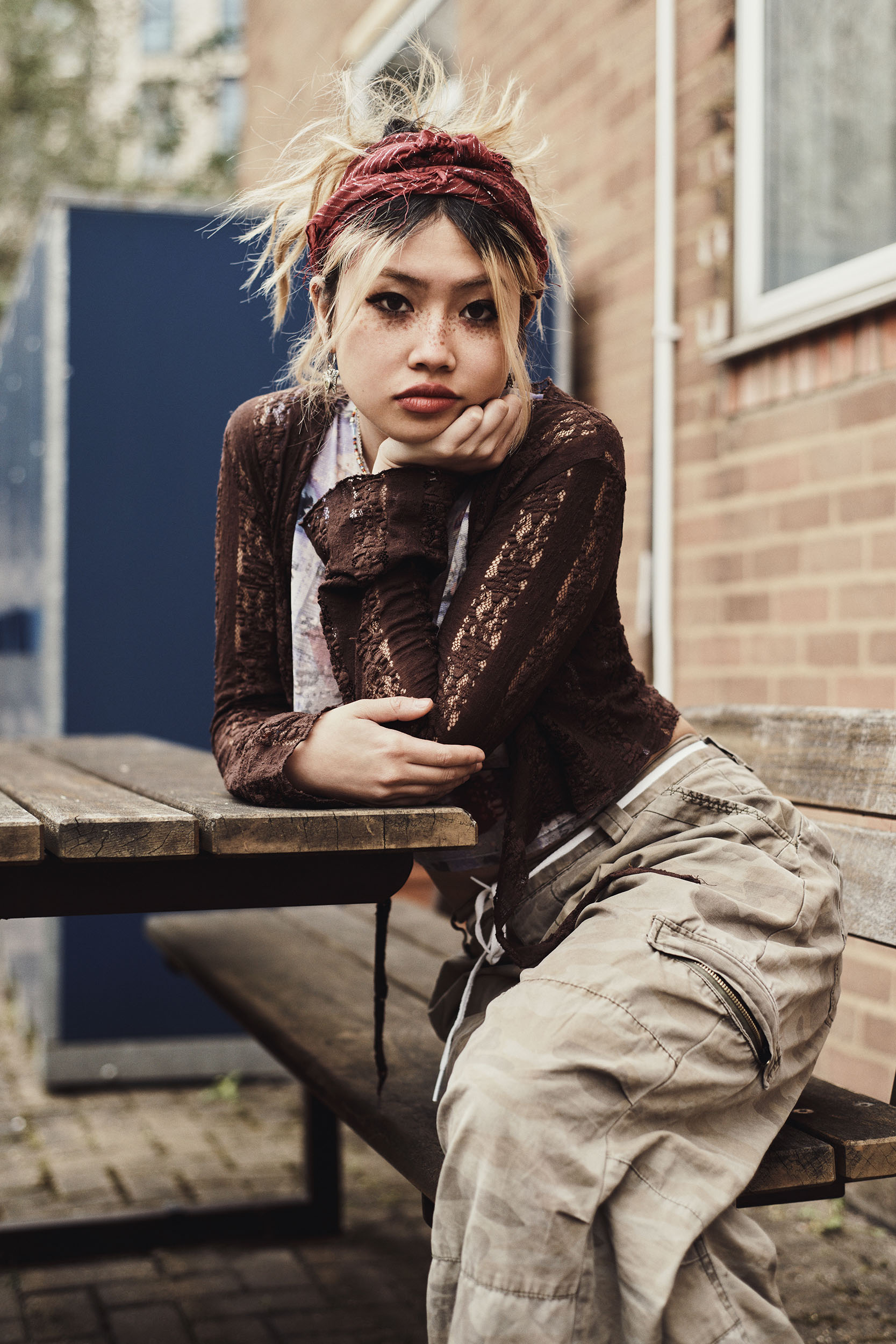 During the lockdown, beabadoobee was living with her boyfriend and his creative partner Amir, collaborating on music videos. “We were all living together, and we filmed the whole thing in his family’s kitchen,” she says of the music video for her new track. “It was really wholesome [working together], especially for my debut album. I wanted to make sure people knew the real me from the beginning, and I grew up with Soren [Harrison]—we have the same vision and work quite well together creatively. And then with this next record, I wanted to experiment and test out new directions with Matty and George. My process has always been very private. I like to write alone in my room, but I’m learning to be more open with collaborators.”

Inspired by the sounds of the late ’80s and early ’90s, beabadoobee cites Elliot Smith, The Moldy Peaches, and The Cardigans as early influences. “I have many inspirations but the female ones are very powerful to me,” she tells me. “I love Karen O, Miki Berenyi of Lush… I didn’t see much Asian representation growing up. I moved to London from the Philippines when I was 3, and I went to a school that was predominantly white, so there was always that slight sense of alienation, or being an outsider… When I saw Miki playing in a band I thought ‘I can do that too!’ and dyed my hair red,” she laughs.

In recent years, Bea has also gotten to know her musical peers by touring. In 2019, she served as a supporting act for American singer Clairo during her Immunity Tour, as well as for the 1975 during several legs of their Music for Cars Tour. As I listen to her recount her dream collaborations, I can’t help but imagine how surreal it must be to find herself suddenly on a level with the people whose work she has grown up listening to. I ask if what moment made her feel like she made it—or if that moment has even arrived yet. “It still doesn’t quite feel real,” she tells me. “I never expected this to happen. I actually just bought a house, and that was crazy for me,” she tells me, grinning. “I never in a million years thought that could happen.”

For Document, beabadoobee has chosen a list of the songs that shaped her—from childhood favorites like Nora Jones’ “Don’t Know Why” to the hypnotic atmosphere of Vapor Trail’s “Ride.”