The musician discusses her visionary album ‘Pang,’ primal screaming in the park, and embracing total chaos as a coping mechanism

During this crazy, unnerving year, Caroline Polachek produced two pieces of art that rocked her rabid fanbase, neither of which were new music, per se, or explicit follow-ups to her revelatory album Pang, released last year. One was a performance of Rihanna’s “Love on the Brain” that streamed live on Grindr’s Instagram page, thrilling a swath of her queer devotees. The other was a video in which Polachek benignly hums to a gaggle of birds at a park until she screeches, unencumbered, into the void; her face remains immaculately composed, like a Renaissance oil-painting, as the distortion comes out of her mouth—one grating, wild scream, and then after a long 20 seconds it is gone, and as we try to make sense of the perfect chaos we have just witnessed, Polachek is walking away, humming plaintive melodies just as before.

The genesis of the “Love on the Brain” performance is relatively straightforward: Polachek’s photographer friend knew people at Grindr, and they made it happen. But asking Polachek to unpack the screaming bird video unlocks a little portal into the curious, wonderful angles of her mind. The electronic musician A.G. Cook had released a mixtape, and asked various performers to make a specific dedication to one of the seven featured instruments. Polachek was tasked with Extreme Vocals, and having done so many variations of extreme vocals in the past—from screaming to hyper-compression to Auto-Tune—she pursued a more radical avenue of expression. “Every idea I had just felt so expected,” she says over the phone. “And so I thought, well, maybe things only become extreme when you take them out of context… so I put on my Apple headphones, and just took my phone for a walk.”

The rest is history. “I didn’t expect to run into a group of geese, or to end up just, like, burying my head in a hedge of honeysuckle and singing very quietly for a while. Whenever I see the geese in the park now, I give them a nod.”

There is something magical about Caroline Polachek: a not-quite-of-this-world quality that anyone familiar with her work would first attribute to her voice, a remarkable instrument that is epic and ethereal and elegant, like a cathedral underwater. After 12 years as one half of the beloved indie-pop duo Chairlift—during which she also released two solo projects under the monikers Ramona Lisa and CEP—she came bursting out of the gate with Pang, her debut record under her own name. As a text, Pang is beautifully intense and kind of mind-blowing as Polachek’s introspection toggles between the familiar and banal—“Back in the city, I’m just another girl in a sweater,” she reflects on “Door”—to the idiosyncratic: “I’m feeling like a butterfly trapped inside a plane, maybe there’s something going on, I’m not insane,” she considers, haunted, on “Hit Me Where it Hurts.” Pang is raw and confessional, and it’s only part of what Polachek has to offer. “I think about vulnerability… that felt like a new level of openness,” she says, ruminating on the past year since the album’s release. “In a funny way I kind of find myself pushing back against that right now. Not in terms of being reactionary, and wanting to be opaque. But more like wanting to jump into total abstraction and nonsense as a kind of coping mechanism. Maybe more of a reflection of life.” 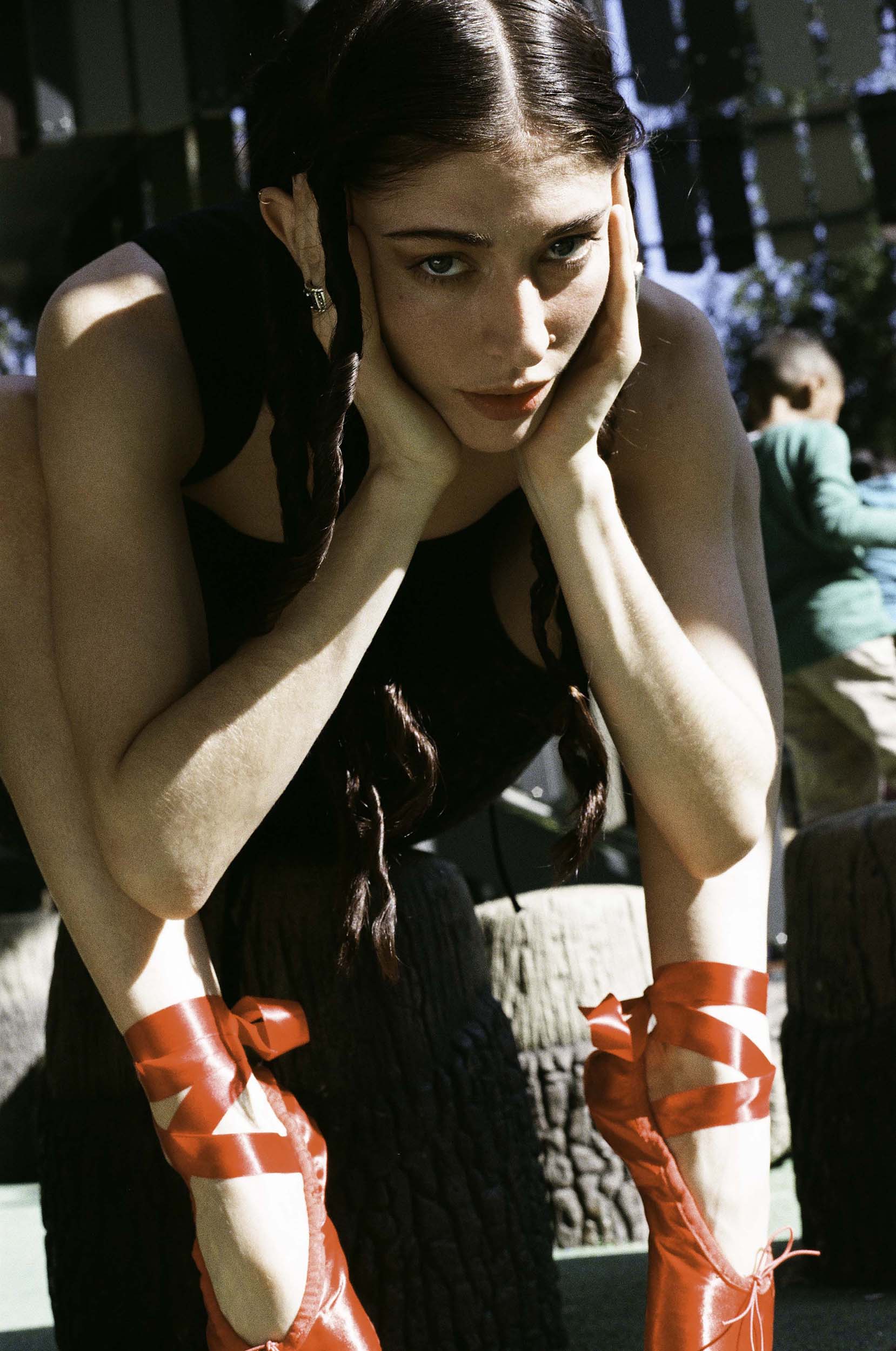 In conversation, Polachek is so much more than a bleeding heart. Her observations are suffused with wry, almost synaesthetic parlance; I’m reminded of her episode of Genius’ “Verified,” where she describes “So Hot You’re Hurting My Feelings”—arguably Pang’s most accessible, dance-floor ready track—as “a sneeze” for how quickly it came out of her. Her comic timing is dead-on, and she keeps making me laugh even when I don’t think she’s necessarily trying to be funny. Above all else, I feel a prescience when I talk to Polachek that is totally sensical: it’s part of that same magic that she has built from the ground up, immersed in the electricity of her visual and aural worlds.

From the long-distance desire of “So Hot You’re Hurting My Feelings” to the Sisyphean rotation of “Door,” Pang is the quintessential quarantine album, although it was released last October. There is even a song called “The New Normal” that recalls minute quotidian details as the seasons pass: “It’s house arrest, no stopping for dinner,” she clairvoyantly notes at one point. Fans and critics see Pang as a perfect and complete record, but for Polachek the COVID-19 pandemic resulted in some unfinished business with the work. “There’s a lot I wanted to do that I didn’t get to do,” she says. “I was still quite inspired by a lot of the challenges and ideas that that album laid out.” In lieu of planned projects, she released an extended mix of opening track “The Gate,” a textural and cyclical revision that she sees as a “parallel universe or alternate ending” to the original song.

Polachek’s preoccupation with patterns and loops intuitively gestures towards natural lifespans, an interest in letting go and rebuilding anew. She started over in her own life without intending to this February, when she found herself living in London after an early COVID-19 diagnosis and the UK’s subsequent travel restrictions. “After being here for about four months, I just remotely let my place go, which was strange,” she says, but most frustrating of all has been witnessing from afar the Black Lives Matter movement and the ensuing protests. “Going to the protests in London was quite awkward actually. Having a sign that says ‘Defund the Police’ feels crazy in a country that has significantly less funding for the police compared to the US.” 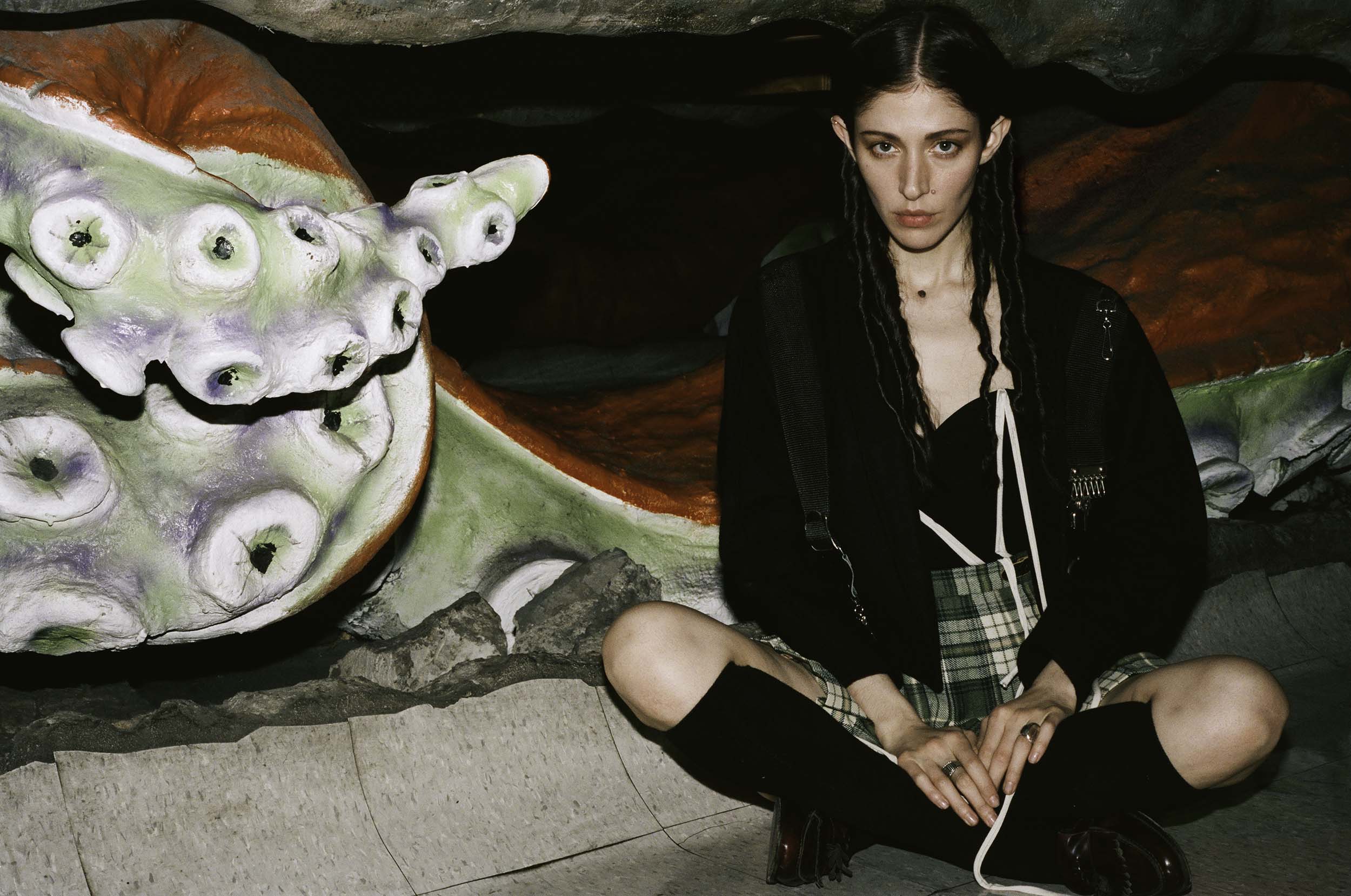 Since settling across the pond, Polachek has sought delight in adapting to the limited circumstances and making new creative landscapes for herself. She bought LED panels for her home studio so any prospective Zoom caller is “in the club for my meeting.” She’s done a lot of live covers à la the Grindr appearance, and won’t play the song again: “If you miss the performance, you’ll never get a chance to hear that cover.” She was challenged and excited to tackle Moses Sumney’s “Two Dogs”—a highlight from his majestic record græ—and recently performed “Delete Forever” by Grimes. (I experienced a wild, splitting sensation in my body when I heard this news, feeling at once thrilled by the prospect of Caroline Polachek covering these songs and then devastated that, because I was not a live attendee, I will never hear them.) She collaborated with Oneohtrix Point Never (A.K.A. Daniel Lopatin) on “Long Road Home,” a woozy and discombobulating electronic track that is equal parts euphoric and contemplative.

“[The track] is so kind of psychological, and lives totally inside of Dan’s mind. I felt like our voices got morphed back and forth between his deeply materialized version of it, and my very feminine, very plain, very simple, very human version of the vocal. And in that way, it’s kind of like a totally iridescent voice that moves and slips around.” The writing process was transcendent in more ways than one: the final minute of “Long Road Home” immediately conjures the Wild West, and “the cowboy riding into the sunset. Guitars come in and you see this open desertscape.” Just as Polachek and Lopatin had finished writing the song, they learned that Ennio Morricone—the Italian composer and godfather of Spaghetti Western soundtracks to whom the end of “Long Road Home” was a conscious ode—had died. “It was so chilling,” Polachek says. “It was like we were saying goodbye to him without realizing it.”

Polachek spontaneously went to Italy earlier this year, working on her new album. “It’s funny, that Christine song was almost like a premonition,” she says, referencing “La Vita Nuova,” her collaboration with Christine and the Queens, released in January, where she sings in Italian. “I didn’t know I was going to end up there at all.” Polachek has potent creative ties to the country; she fell in love with the Medici villa in Rome when Chairlift performed there in 2012 (“I spent the whole night wandering around in a kind of fever dream state”). She was invited to do a residency which she began immediately in the sweltering July heat, and there the earliest origins of her Ramona Lisa record were born. “It just felt like such a different energy over there,” she says of the country in the wake of the pandemic. “Italy did such a good job very quickly in doing a very serious lockdown… it felt like a complete departure from the rest of the year to be outdoors all the time, and in this hot, chaotic place that has so much history, but is also so run down in a lot of ways. I found all of it very inspiring.” 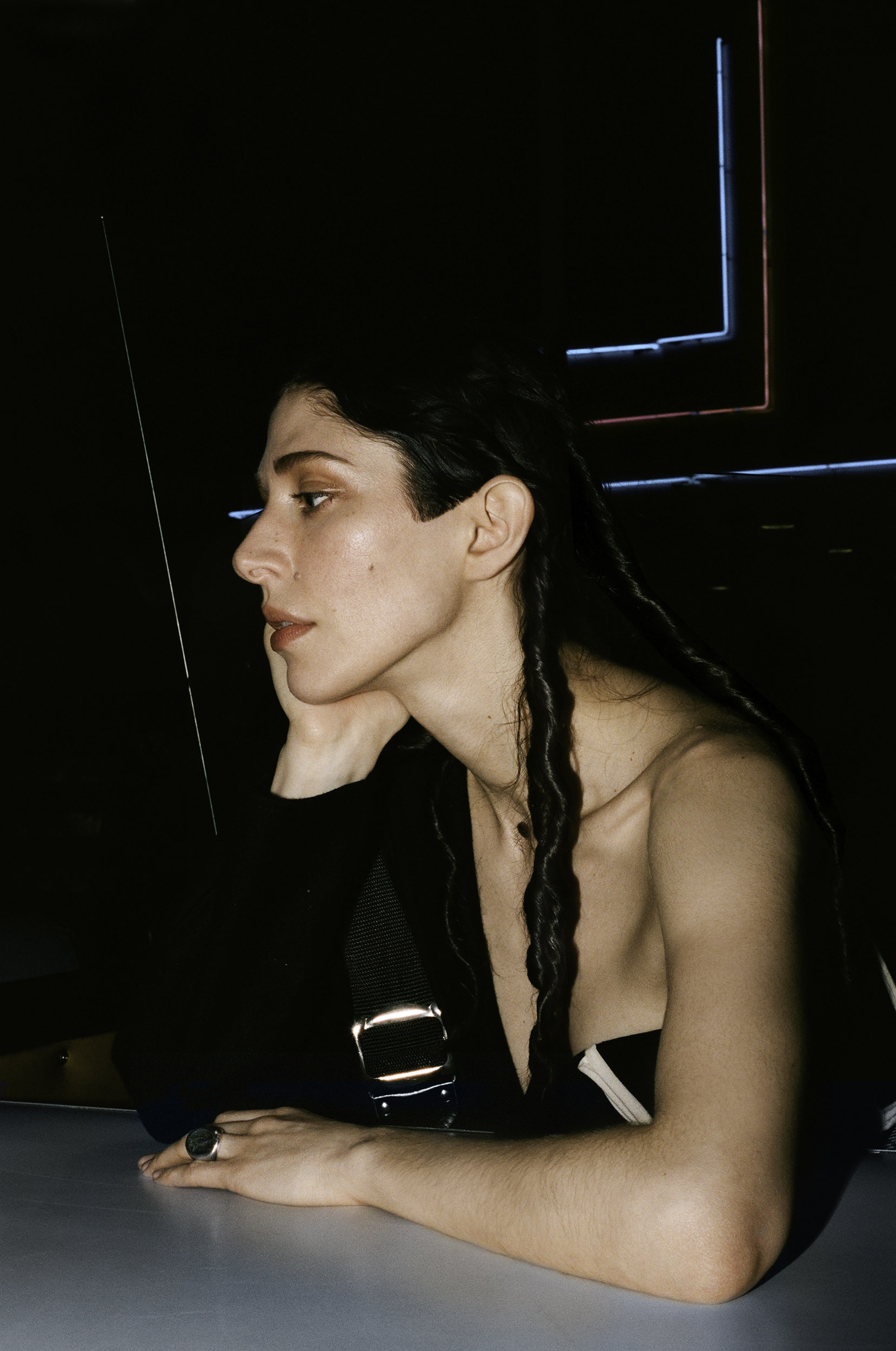 The new album’s release date is TBD but Polachek is rigorously scaffolding aesthetics and moods, drafting up templates of new visual and lyrical realms that are doubtless roaming through her mind already. “It’s going to be interesting to have to do that within the constrictions of lockdown, but I don’t really see that as an issue.” And London is a new geographical blueprint for vibrant collaborators and thinkers, people she has never worked with before. While her dedicated fans wait, there are still doors to other doors to other doors, thresholds through which we can get to know more of Caroline Polachek and her visions: like the photos that accompany this piece, for example, which were taken by Polachek’s friend at the Los Angeles location of the inimitable electronic store chain Fry’s. Each Fry’s store is themed, and the LA one had been staged as a 1950s alien invasion.

“I was obsessed with this store… it’s just the most insane, surreal place, and no photos were allowed, but I snuck in with a friend, and we did a really cool set of portraits that were just for fun, just for the two of us. And then, of course, at the beginning of lockdown, Fry’s closed and no longer exists. So our secret photos can see the light of day.” How sad that Fry’s closed, I say. “Yeah,” Polachek acknowledges through a drawn-out breath. “That place had the haunted, vacant absurdity that was like a premonition of this year in a lot of ways.”

If anyone could identify haunted absurdity, it’s Caroline Polachek. I’m reminded of her geese screaming and how it was a much-needed exhale during the height of New York lockdown darkness; that its pitch-perfect insanity was an extreme, concentrated textual metaphor for just how off-kilter everything had become. During our conversation, she discloses to me that the original geese video was 40 minutes long. I tell her that if ever there was a desire to release it into the world—another extended mix, surely—she has an audience ready and waiting for another one of her cycles, and with it another rupture in time.