Hailing from South Africa, the former drag king deftly straddles the line between the lighthearted and the political

Hip hop has arguably become the cultural backbone of the 21st century. It’s also a polarizing genre, equal parts revered and lambasted. Unsurprisingly, hip hop artists are constantly under scrutiny for their contributions to the culture. The pressure can be intense, though you wouldn’t surmise that from looking at Dope Saint Jude. The South African rapper deftly straddles the line between the lighthearted and the political, spitting lyrics like “Kissing your girl don’t be mad, I might just wind up a dad”, (Her salacious smile during this part of the video for her new track, “Go High Go Low,” indicates that this is no empty promise) while conveying socially conscious and insightful messages. A line on her 2015 track “Hit Politik,” “If everyone is accountable, it won’t be insurmountable,” has always stood out to me as a perfect encapsulation of the global political climate today.

Even as a performer, the emcee is as captivating as she is playful, leading the audience in spontaneous free-styled chants before silencing her band to deliver a rap completely solo. She maintains this balance in a way that appears not only easy but downright natural, and that’s largely because for her, it is. Identifying as a queer woman of color who hails from the Cape Flats and launched the city’s first drag king troupe ensured that she could never be your run-of-the-mill rapper. Cape Town is a city of inherent binaries; ostentatious wealth coexists with generational poverty and spatial inequality. Afrocentric identities collide with colonial landmarks. Dope Saint Jude touches on all of this through the multi-faceted lens that has defined her artistry. Her songs are a vehicle for her experiences, and in a world oversaturated with discourse around identity politics, she manages to imbue her work with a radical newness that is rare in today’s music industry. 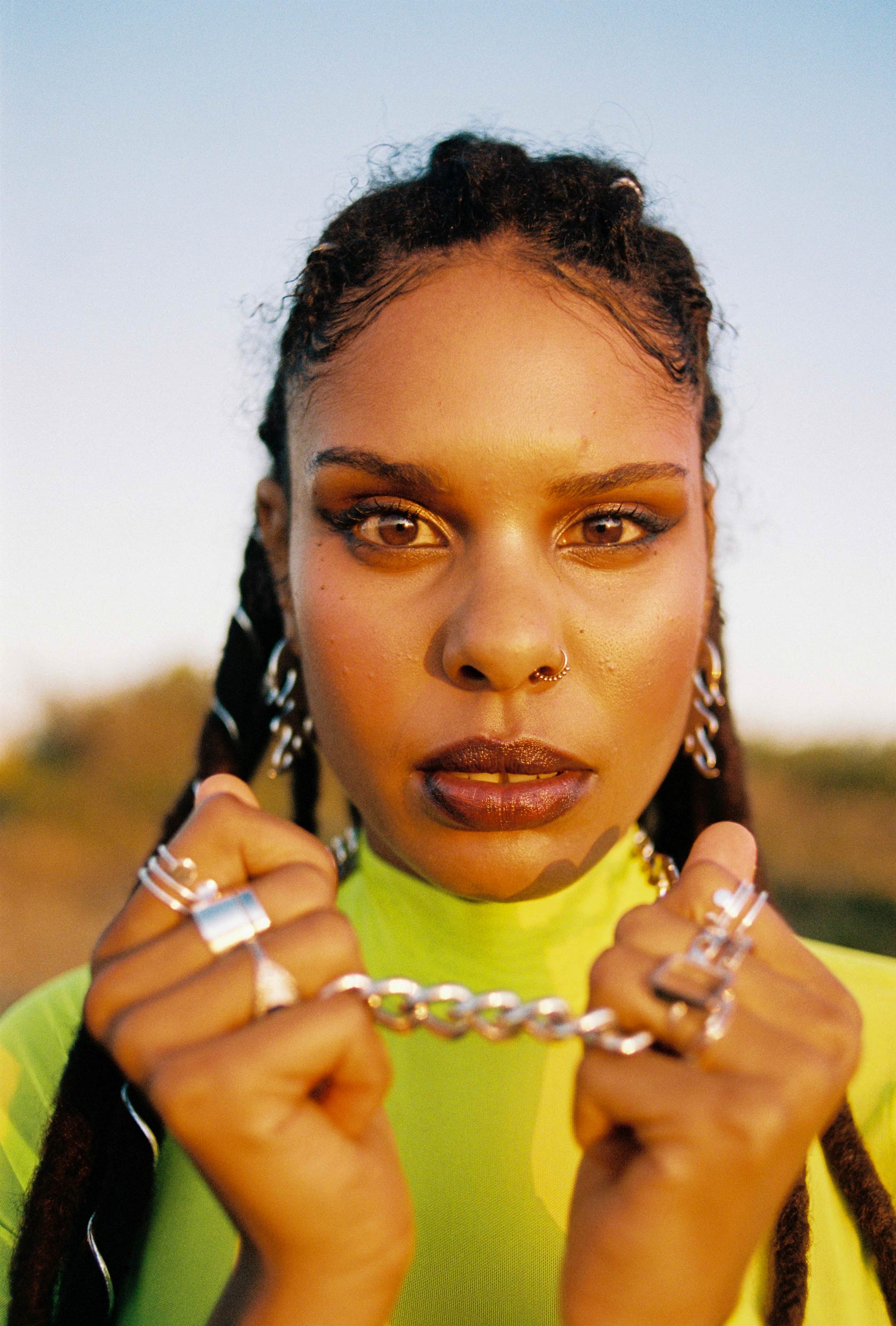 Tasneem Jacobs: Would you say that your artistry has evolved since your last body of work?

Dope Saint Jude: Yes, it has changed quite a bit. I think I’m a lot more humble in my approach. I realize that I am still in the infancy of my creativity, so I nurture it as much as I can. My music is continuously evolving so it’s tough for me to describe the sound just yet but I would say it’s big, emotive, and passionate.

Tasneem: Having relocated to London in the last year, do you think that’s had an impact on your sound, and how so?

Dope Saint Jude: Definitely. Moving to London has been a major break from the reality that I once lived. As a consequence, I feel a sense of freedom I’ve never felt before. I think this happens when you move to a new city [for the first time]. My sound has been informed by this sense of freedom—I feel as though I can explore more. I usually like to produce the music and let the lyrics naturally follow from that.

Tasneem: Your music has always been unapologetically empowering from the beginning. It feels like “Go High Go Low” is very much an extension of that. Where do you derive your confidence and innate power from?

Dope Saint Jude: I struggle, like many people do, with my self-esteem. It’s a daily ritual to ensure that I am in a peak emotional state. I actively work on my confidence; it’s not something that suddenly appears. When my confidence waivers, I usually work out or try to accomplish something I need to do. Exercising just pumps me up because it gets me moving. If I accomplish something or complete a task, I create momentum for myself to tackle other things that also gives me confidence. It’s pretty simple really—I hope my music encourages people to work on their confidence. 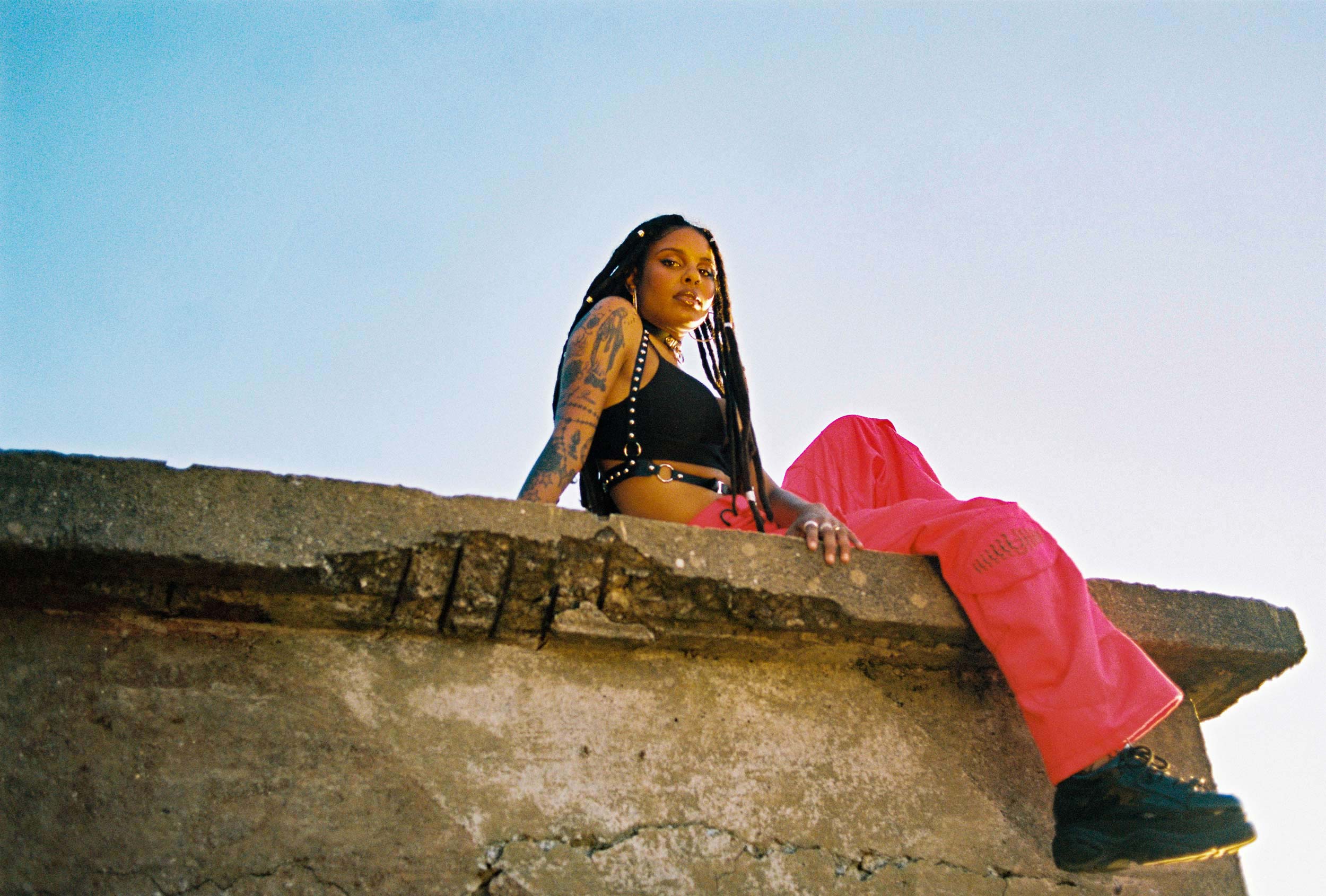 Dope Saint Jude: The track is a reflection on my path starting from feeling small and insignificant to becoming strong and worthy. It explores the entire process as a journey of self-love and belief in myself. More than anything, this journey has required consistency and diligence and that comes through in the song.

Tasneem: The visuals for this track are so dynamic. It portrays Cape Town in a way that hasn’t been done before. What influences did you draw from when conceptualizing this video, and why was it important to you to incorporate a focus on the Cape Flats specifically?

Dope Saint Jude: The visuals are inspired by the beauty and fun of my home. I grew up in the Cape Flats, and I wanted to celebrate the place that I come from. The Cape Flats symbolize many different things to people but I felt like I needed to explore and celebrate what it means to me. To me, it’s where I grew up, it’s the root of my existence and my understanding of myself. I wanted to show my version of it: A place that is complex, colorful, and fun.

Tasneem: You’ve spoken previously about your musical influences being Lauryn Hill and Tupac. Are there any contemporary artists you see yourself collaborating with in the future?

Dope Saint Jude: My dream collaborations would definitely be with Lizzo or Janelle Monae—I love them both so much!

Tasneem: You are in the driver’s seat of your career right now. Your legacy is completely up to you. How do you want to be remembered as an artist?

Dope Saint Jude: I want people who listen to my music to remember me for being bold and unapologetic. 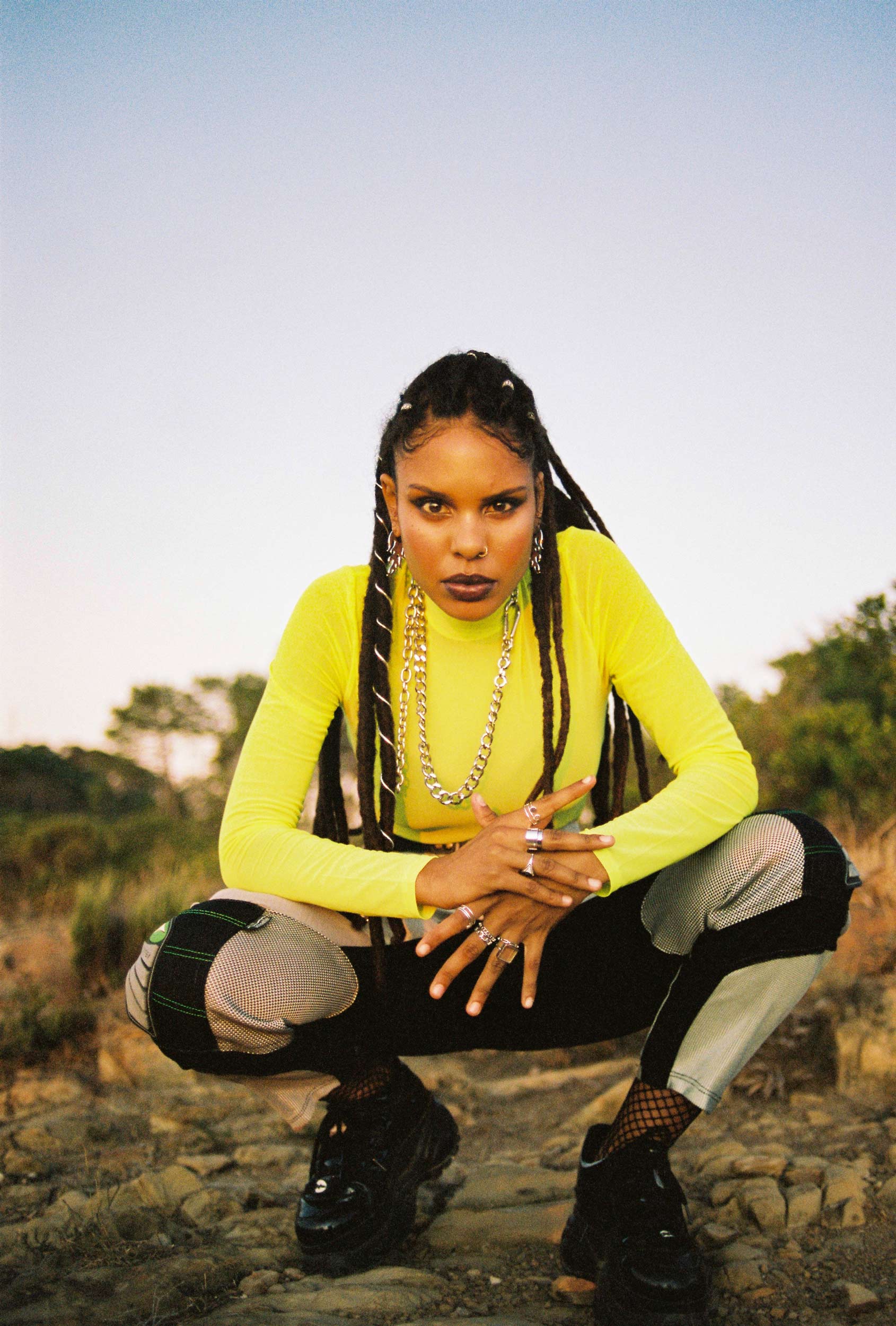 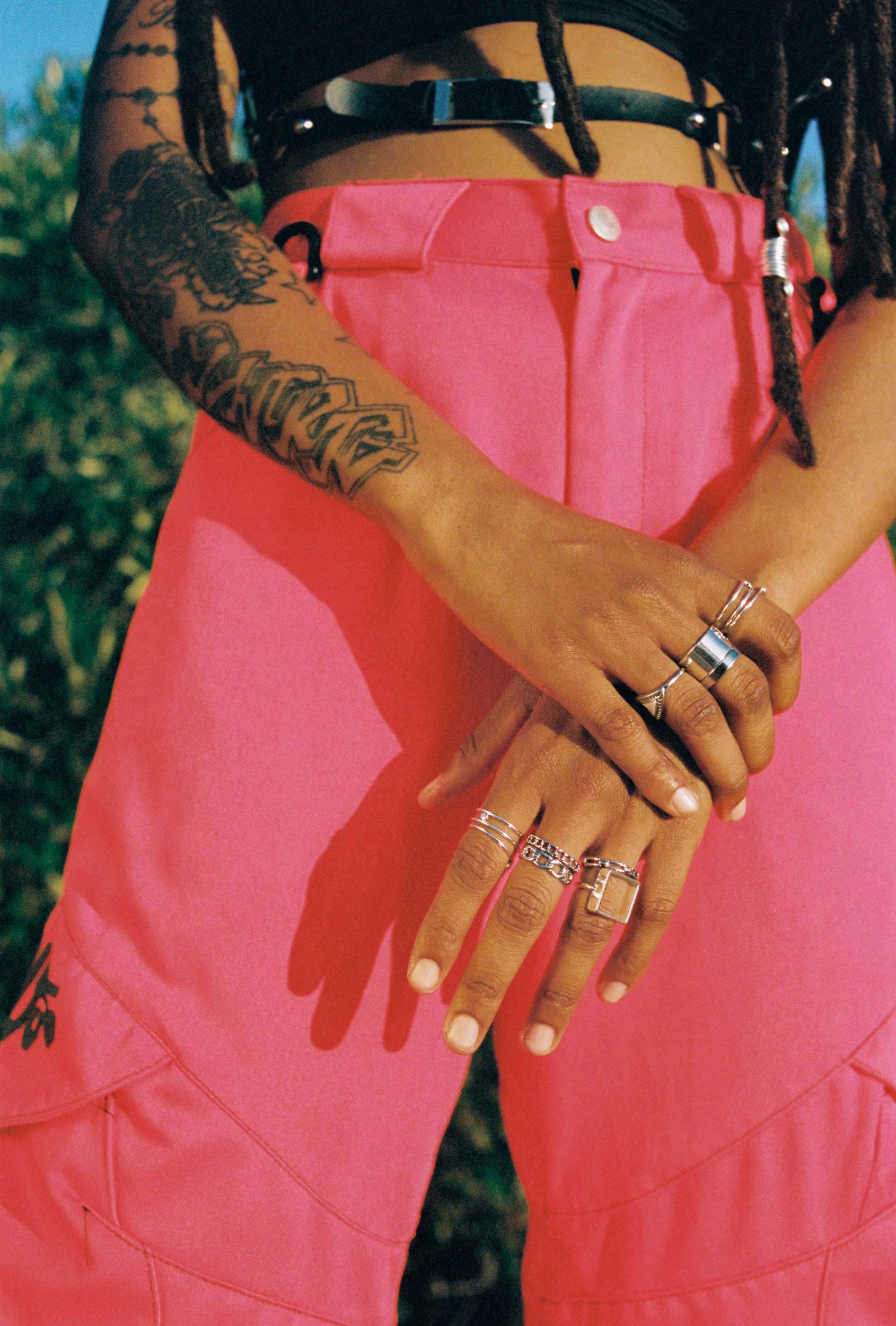 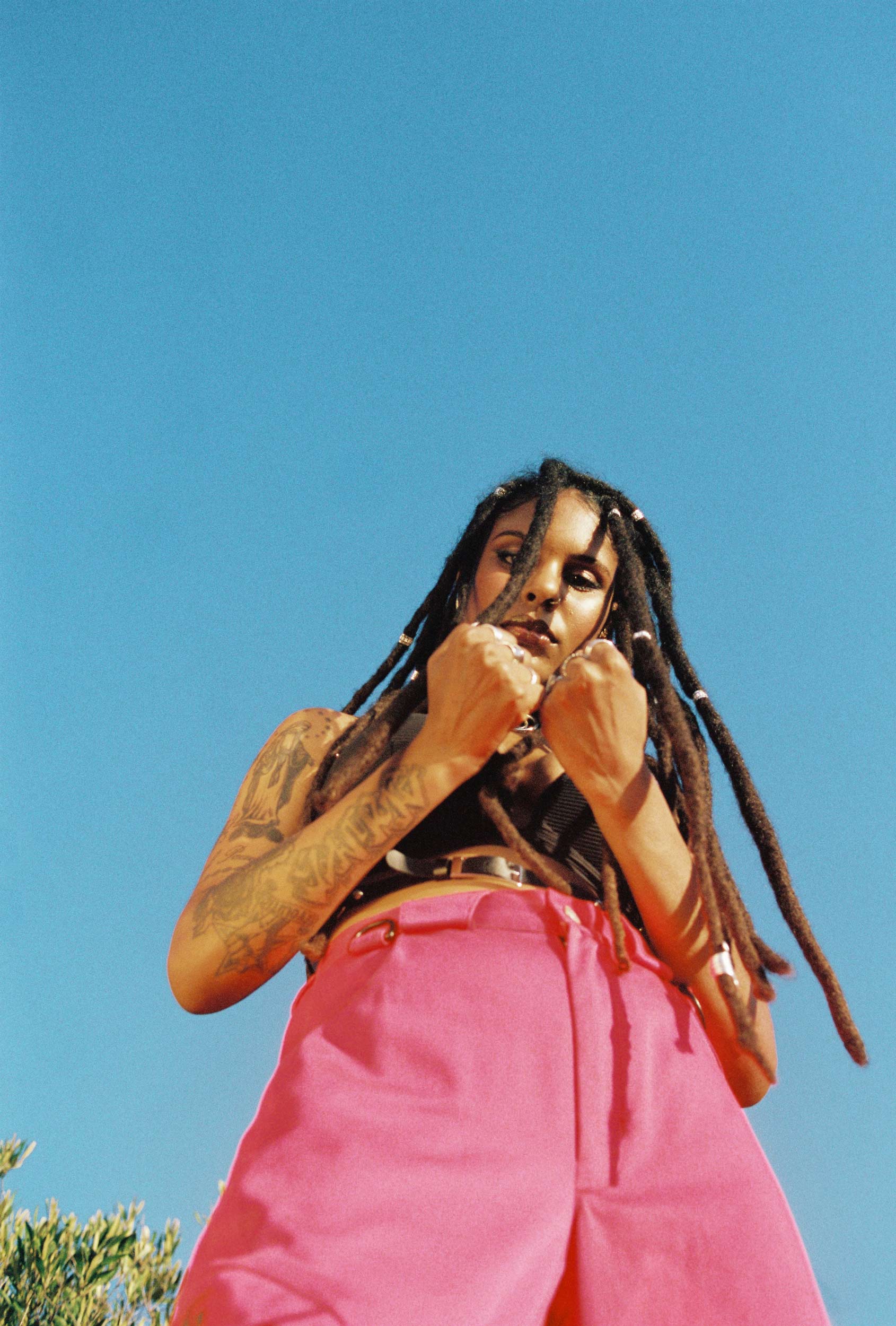