On ‘two caves in,’ the musician spins growing pains into baroque pop gold.

There’s almost nothing simple about Lauren Auder. Propelled by ornately layered music that caught the attention of ever-astute label True Panther Sounds, there’s a level of complexity in Lauren’s music, lyrically and sonically. On their 2018 EP Who Carry’s You, Lauren’s goal of carving out a space for themselves led to bedroom compositions flecked with references to poetry and religious imagery, and musical influences ranging from French composer Maurice Duruflé to California rap duo Main Attrakionz. Lauren’s lone simplicity may be a desire to be understood and to continue to understand others.

That ethos translates in person as well. Lauren’s measured, holding your gaze with deep-set hazel eyes. But when a question gives pause Lauren will look down, at chipped red nail paint, or around, almost searching for answers in the crowd. Sitting above a mid-morning Essex Market, we chatted about their upcoming EP called two caves in, the small-d democratic impulses of the music and fashion worlds, and loss of innocence—something that, at age 21, is a fitting thematic core for these five new songs.

Baroque pop, a reference point for Lauren’s music, still feels limiting as a label. The drums on the cut “meek” are reminiscent of Portishead’s trip-hop, while lead single “june 14th” is upbeat, buoyed by a churning string section. Songs are arranged with a noted concern for continual escalation, whether through repeated lyrics that progressively contain more of Lauren’s vocal rasp and fervor, or robust arrangements that utilize a wide variety of instruments.

Lauren presciently locates the universal in the particular, and it’s clear that their primary goal is expansion, to do more and be more sonically and visually. Recording started in the mountains of France and developed further while on tour, so there’s been a long road to this latest offering. In the end, two caves in is an appropriately detailed living document. 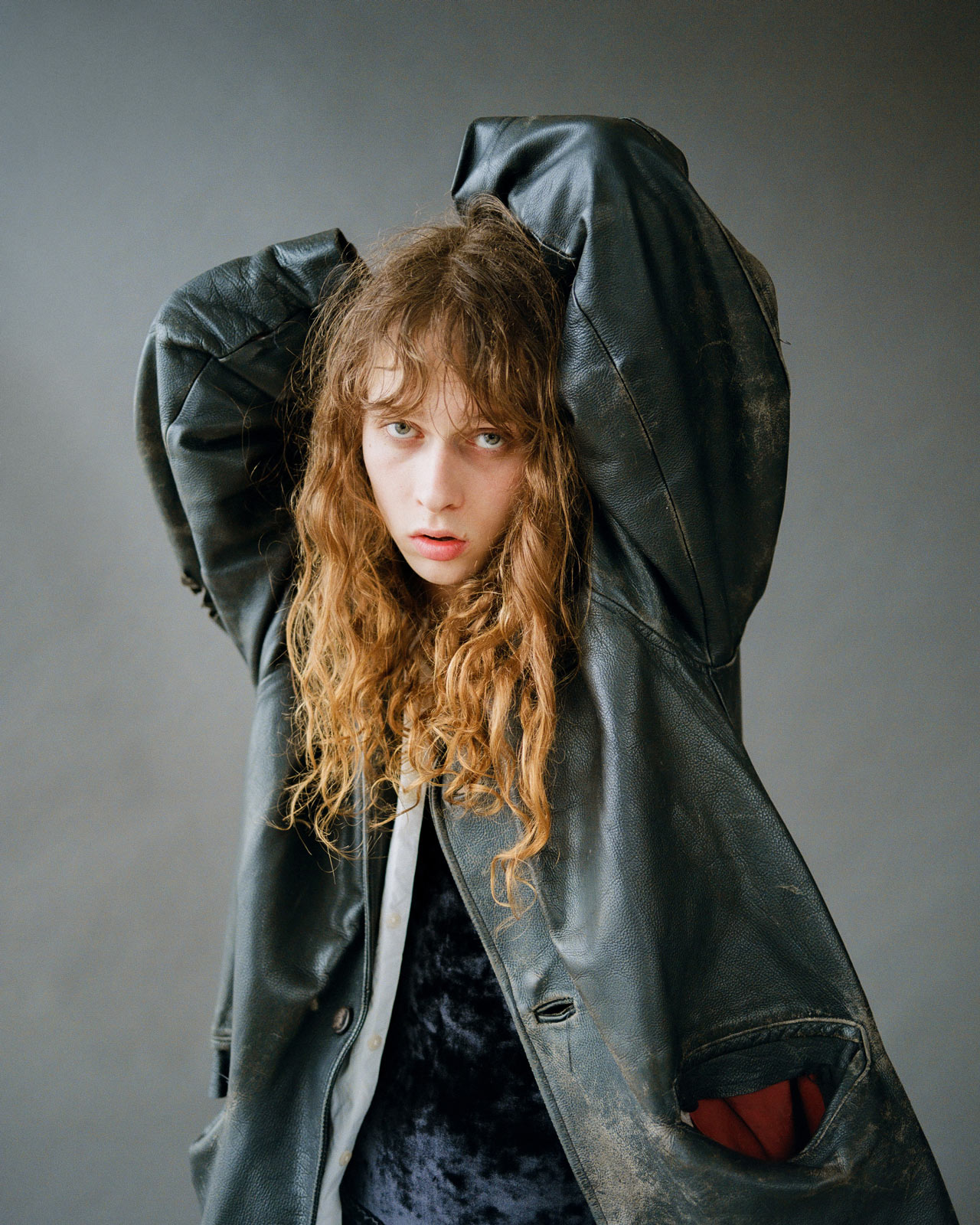 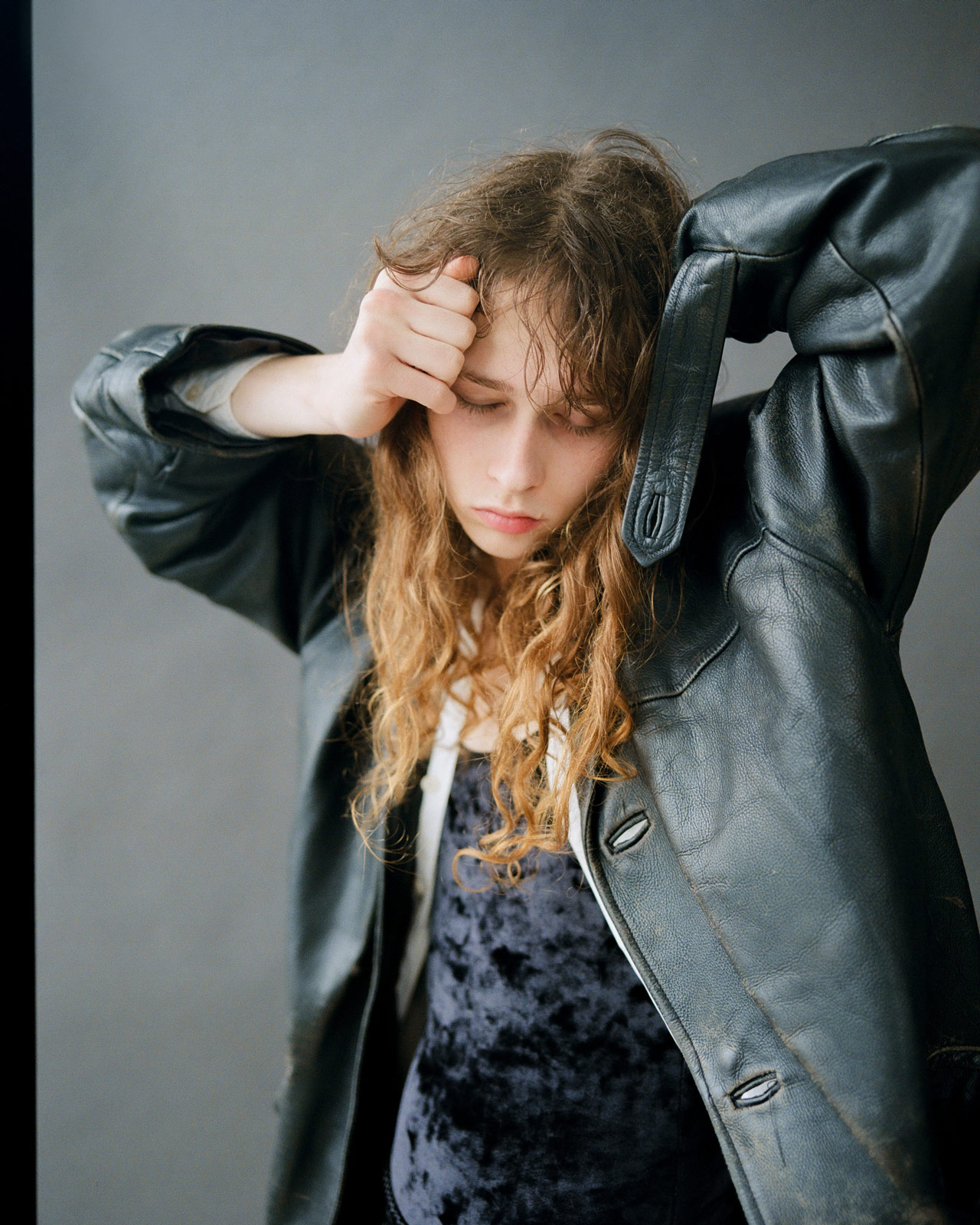 All clothing by Wiederhoeft.

Jordan Levy: It’s been a hectic few years since Who Carry’s You, so are the collaborators still mainly the same?

Lauren Auder: They are, they completely are. I mean, for the first record, I co-wrote with Dviance musically, and then added my lyrics. This time we’ve broadened our horizons a bit more; it’s a larger project in sound and in its ambition. Even though it’s co-written by us the same way, now we have live string players and we have a producer who came in and we orchestrated a bigger team.

Jordan: Definitely, and I was wondering if the environment had changed, because I know your music was largely made in a bedroom. You’d say you’ve moved on from there?

Lauren: With people playing in a studio it makes a big change, and it’s definitely influenced by the changing surroundings I’ve had in the past few years. After that first record we got to tour a lot and play in ridiculously big venues for where we were at. So it was definitely a conscious thing to want to make something that felt like it was made in a bigger space, and for a bigger space.

Jordan: How was touring with Amen Dunes?

Lauren: It’s kind of an interesting thing, because I got to tour with them and Christine and the Queens. That was really exciting, to be able to have those two very different experiences, because somehow I want to fit in a pocket between those things. Even more than sound-wise, I think in broader aesthetic ways we’re very similar.

Jordan: I saw you said you’ve been writing parts of this EP since you were 18, which means it’s lived with you for a while. I was wondering what song or what section has been around the longest?

Lauren: It’s hard to say because the demos for at least four of the songs were written in one week. Yeah, when I was 18 turning 19, Dviance and I went up into the mountains in France and locked ourselves down for a week. We basically came up with the demos for the five songs. The way they’ve changed and evolved has been huge, but it’s hard to pinpoint which song. 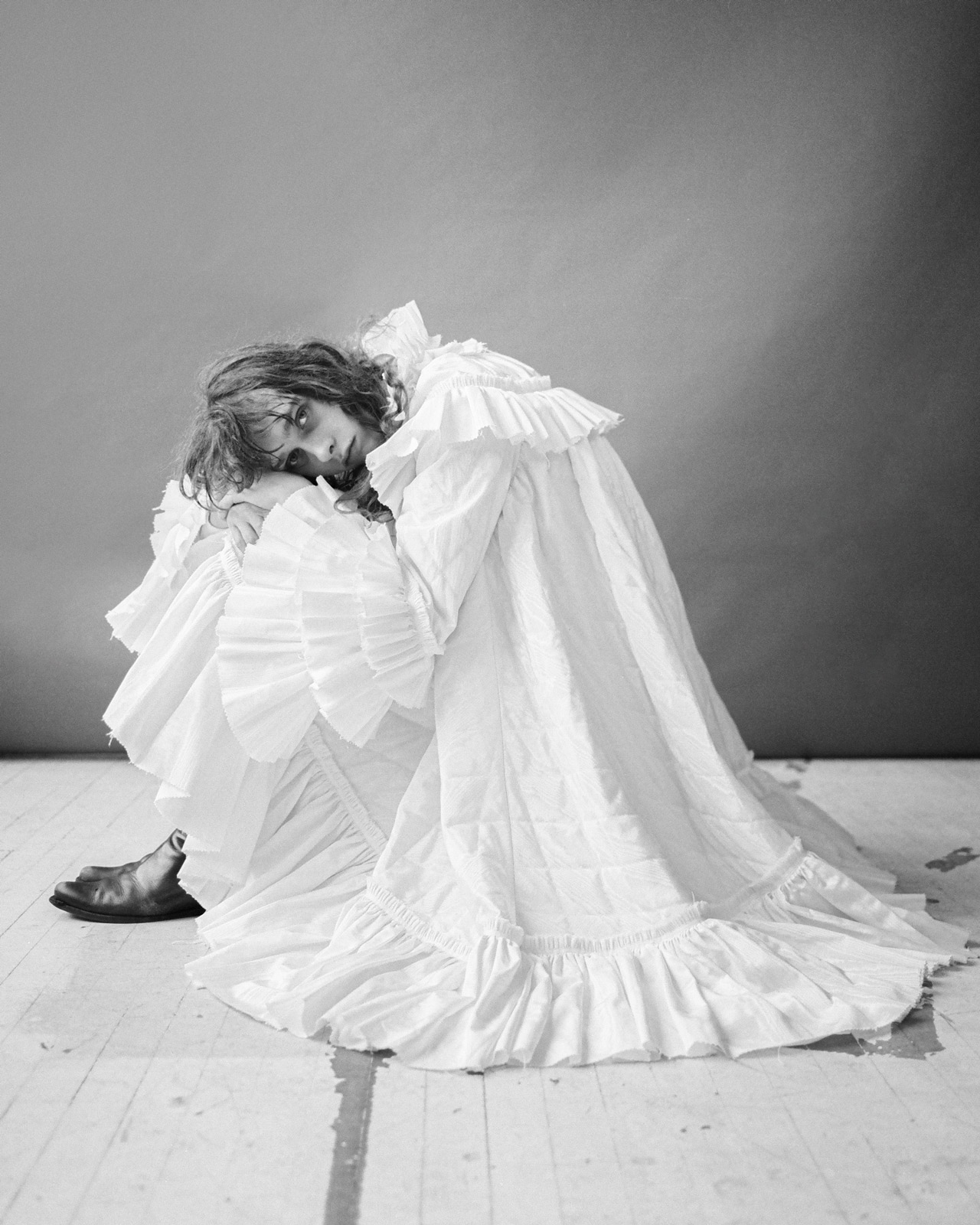 Jordan: I know you had music journalists for parents, did that clarify anything about the industry for you at an earlier age?

Lauren: I wish I could say it did, but I think no one knows what the fuck is going on with the industry right now. It’s such a different beast, just in the last decade—if not in the past 20 years—the music industry has completely shifted. It’s definitely given me an appreciation for writing about music, and that’s informed the way I make music. I want it to have meaning, for it to be able to be written about.

Jordan: So you’re a music fan clearly, but you’re also a big fan of poetry. How does frequently engaging with poetry inform your work?

Lauren: Probably all the time, because I write all lyrics before music pretty much, and then mold it and shift it to fit into whatever music I’m creating. I’m constantly reading poetry or novels, and the images I get from that are always something that I write down, and then it exists in my mind. After a while it morphs, I guess, into my own imagery. It’s a constant source of inspiration, probably more so than a lot of musical lyrics.

Jordan: What would you say is your most off-base source of inspiration?

Lauren: It depends. The stuff I was really inspired by to start making music, and I’m still inspired by today, is the 2011-2012 era of hip hop production. I was obsessed with SpaceGhostPurrp, Clams Casino, Main Attrakionz. Even though it’s a far cry from what I’m doing now there is kind of a logical progression. What I liked most about it was the airiness, the atmosphere. That kind of got me into ambient music and more, it is a logical thing. That may be slightly surprising.

Lauren: Yeah, I’ve been working with him this week which is kind of crazy; it’s been great. 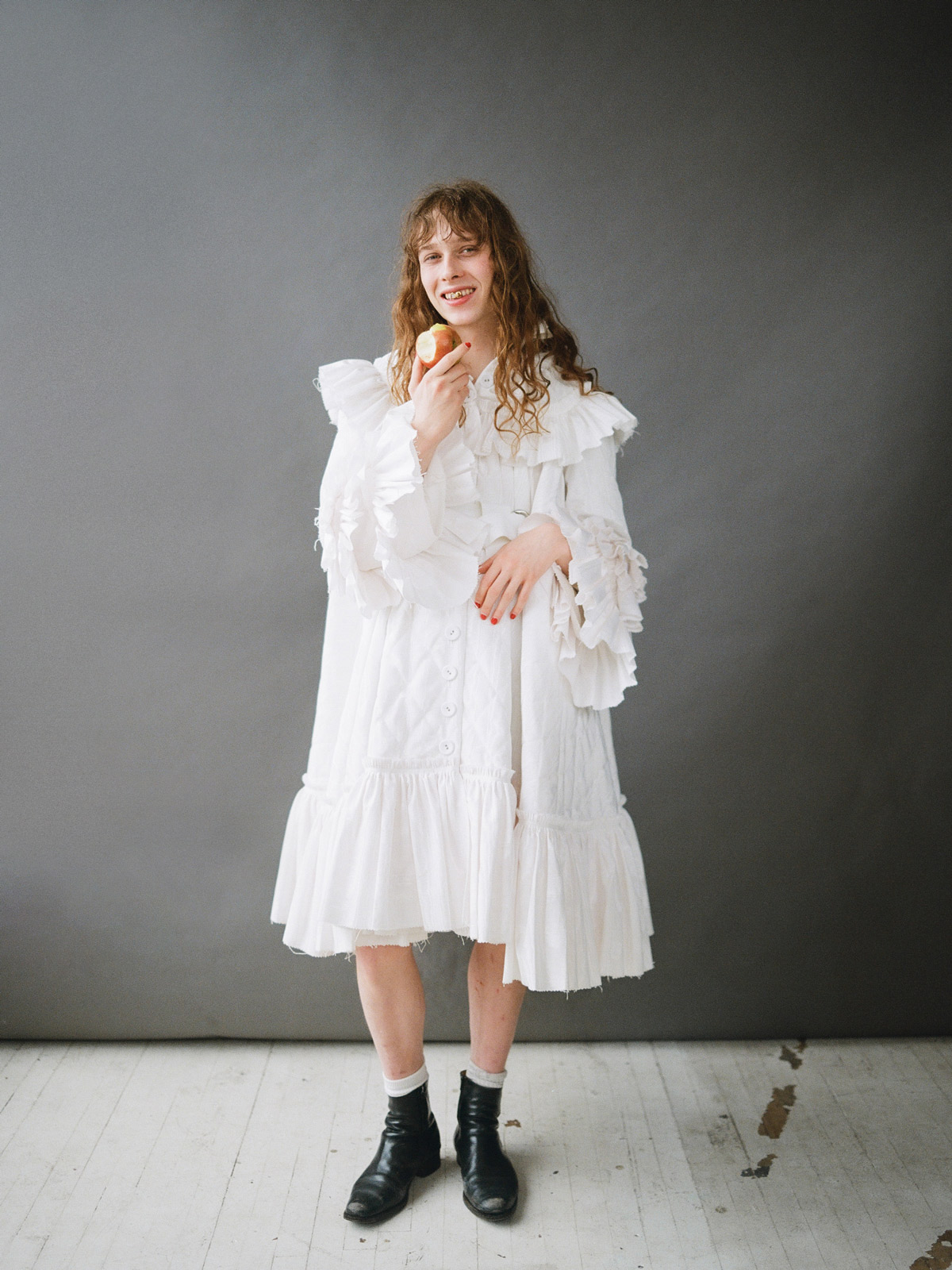 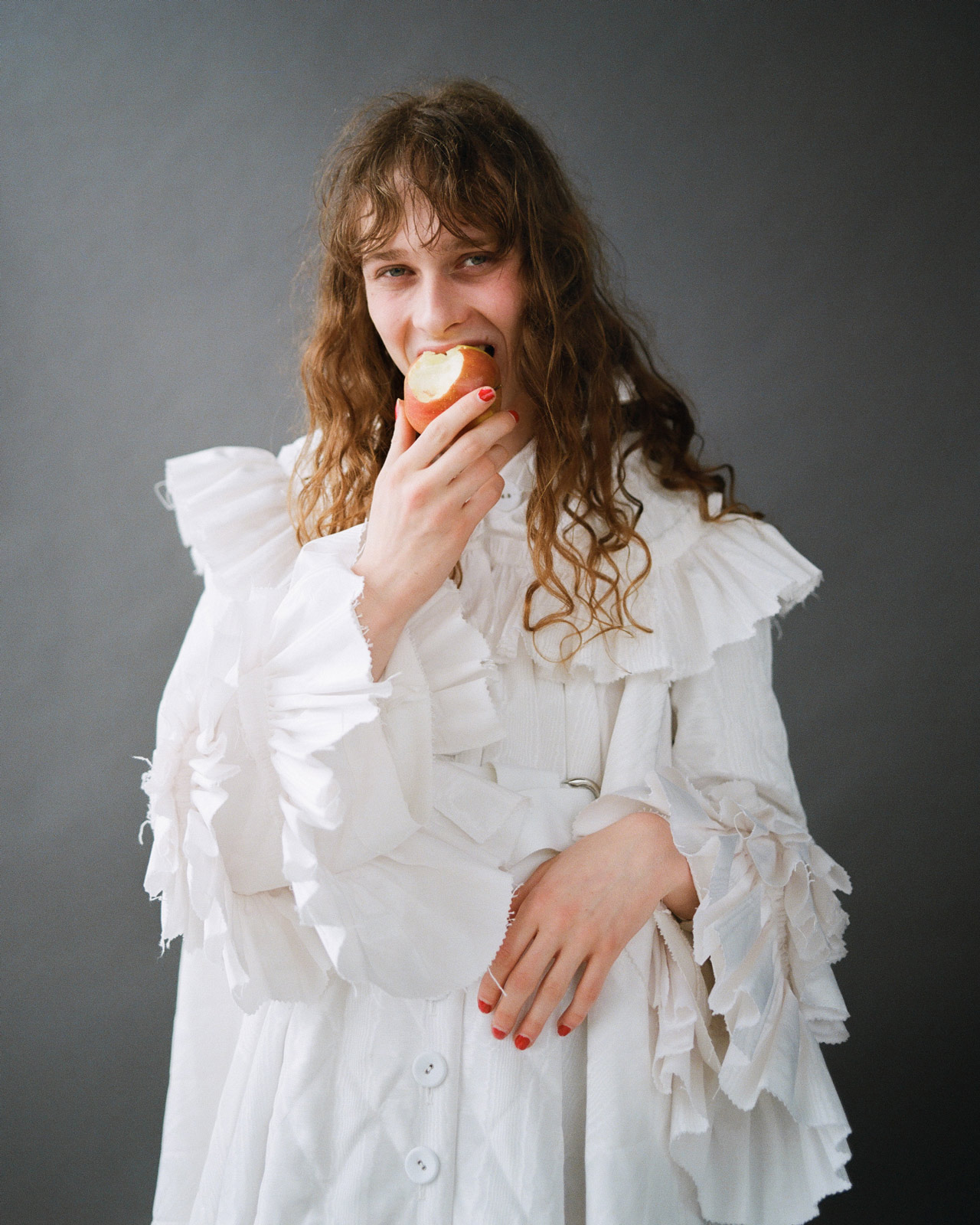 Jordan: Regarding fashion, I know you’ve worked with Celine before, what’s exciting you in that realm right now.

Lauren: I think it’s really interesting that we get to see a lot more people being able to create and expose their work without such a gatekeeper influence. It’s still insane, the gatekeeping in fashion, but in the same way as music, it’s definitely a more modern thing that fashion can be presented [without industry support]. [In the past] you could have DIY shows forever in small venues, but if you didn’t have the funding to put on a real fashion show I don’t know how you would even get the chance [to succeed]. I think that’s what’s exciting, that you can actually start to build a following, that seems like it’s kind of new.

Jordan: One of the lines that caught my ear on ‘meek’ was, ‘your innocence ain’t perfect/you can’t eat from its hand,’ only because it feels like innocence always seems like some unobjectionable truth, from jurisprudence to a child’s innocence. You cloud that view, so why’d you approach it that way?

Lauren: I think at some point you’re inevitably going to lose your sense of innocence just navigating through the world [so] it’s a sense of reassurance. Despite the fact that you’re going to lose that sense of childlike wonder or innocence, that [innocence] comes with its handicaps as well. Through your hardship, that’s really where you grow and broaden your horizons. It’s a pretty universal thing, but I think it’s something important to remind yourself of at times.

Jordan: Basically that these things are all passing, and you can’t stay one way forever.

Lauren: Exactly. There’s no way to conserve yourself as some pure childlike being, and it’s dangerous for you and everyone around you. You can’t be responsible for yourself and others if you try to latch on to that. 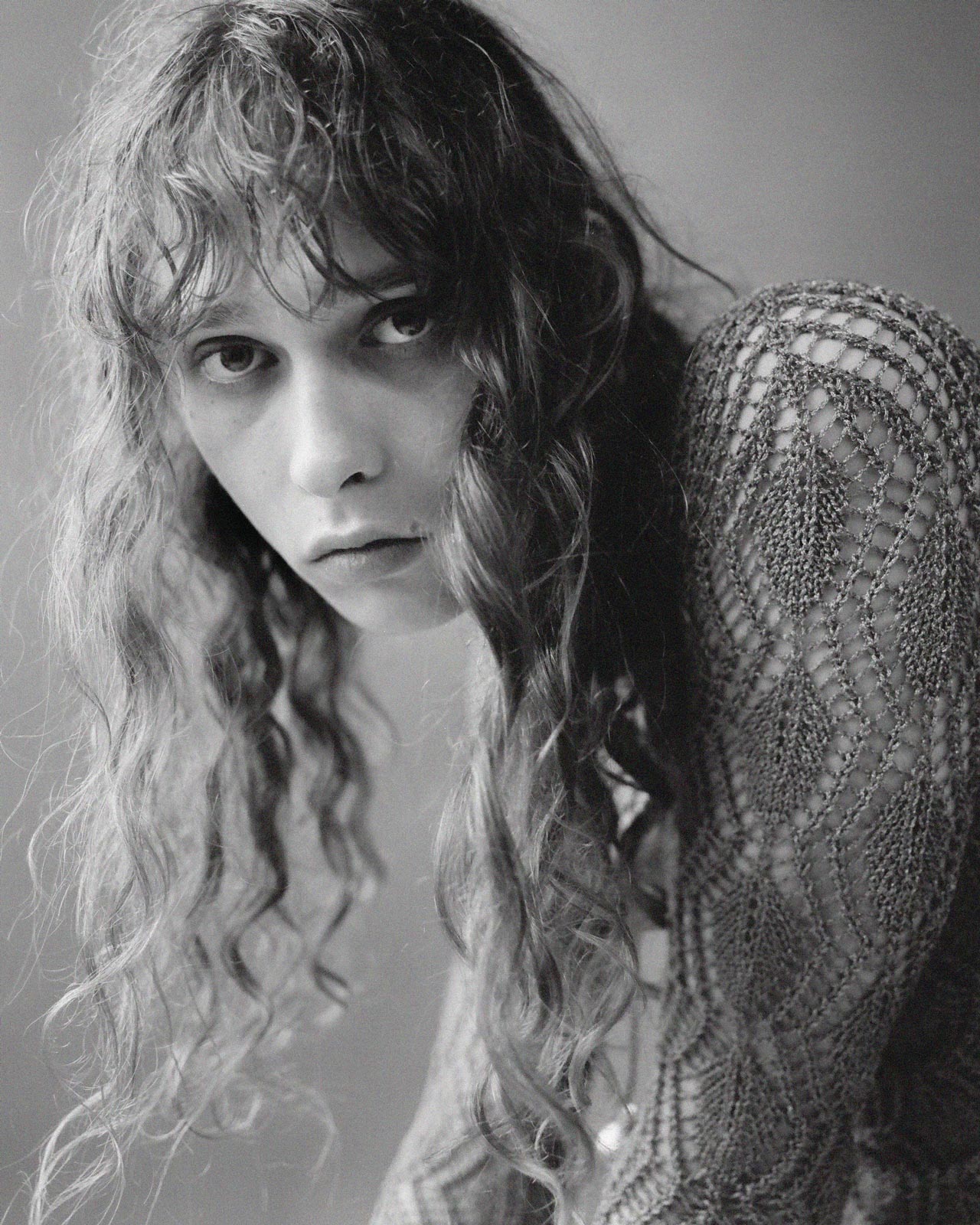 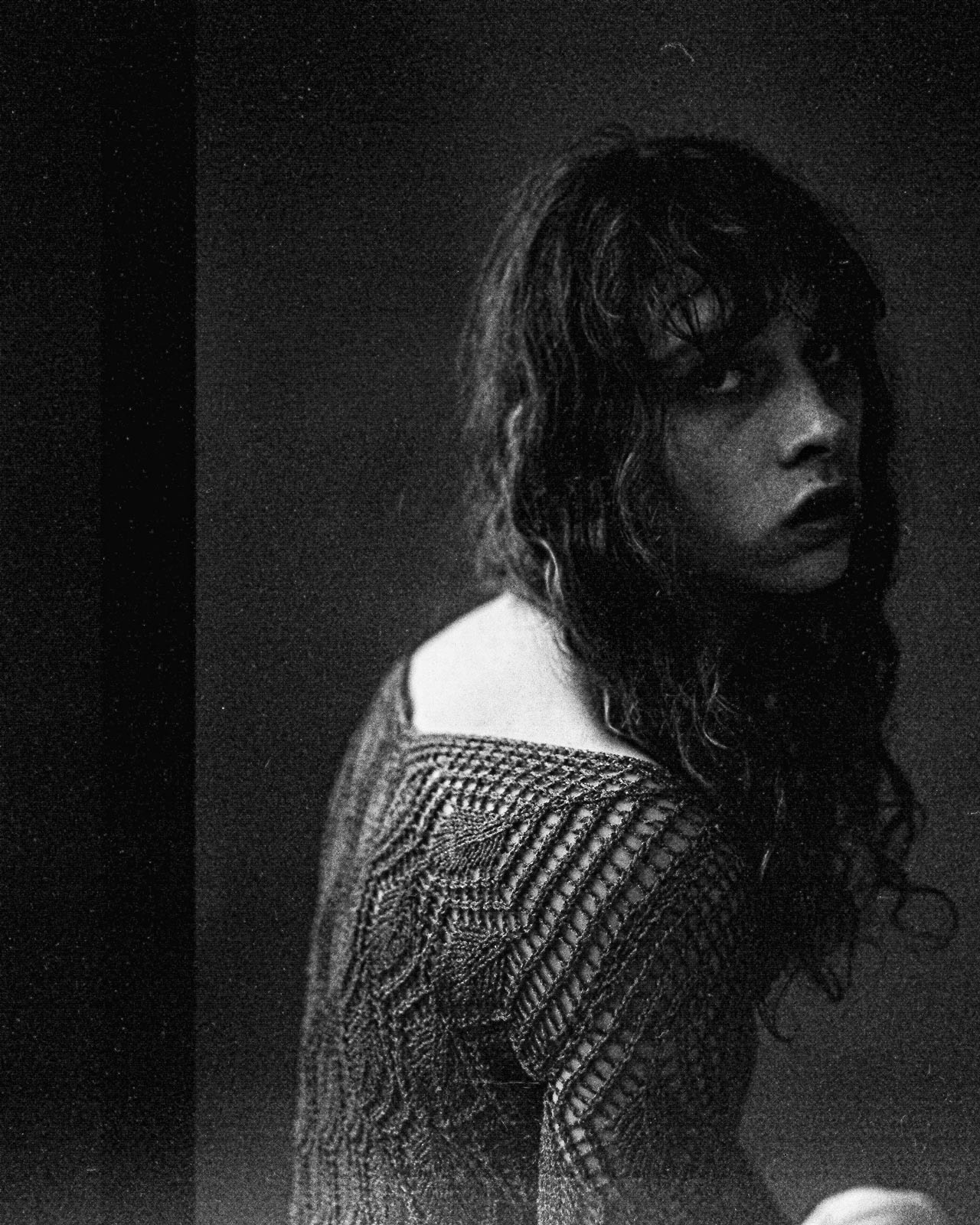 Lauren: That’s what this record’s about, by and large.

Jordan: What kind of growing pains would you say?

Lauren: Well there’s the normal late teens, early 20s growing pains, which are crazy for everyone. I think that’s undeniable. Then personally I was in the period of coming to terms with the fact that I’m trans, and that was a big part of this. I think in a broader sense I want it to be able to be felt in a real way, but that’s definitely informed my take on trying to write about these things.

Lauren: It’s interesting because there’s a lot of hazardous elements in my music. There’s drone work and textual elements that are born from a moment that you can’t control, so there’s always a place for experimentation and spontaneity.

Jordan: With Baroque pop, one of the hallmarks of that approach is the long consistent lines of melody or harmony. At first it was strings, and now I think it’s more ambient synth stuff. Why do you think sustained notes, over verses and occasional swells, help with how you’re trying to affect people lyrically?

Jordan: What are you looking forward to most about two caves in?

Lauren: First of all, I hope it’s a time when I’ll be able to start making and producing music more frequently, just for myself. I made a big transition between these two EPs where I decided that I wanted this to sound different and bigger, and I wanted to make it more alive. Now I can actually do that a lot more. The way I make music is definitely an extremely personal thing, but it’s [also] a communication thing. I want to hear what people think about it because I consume music in depth and I hope that people can be that way with my music as well.