The director of ‘Shadow Boxers’ speaks about documenting the violent beauty of boxing in her films. ‘I wanted to make a movie about a female athlete that was strong and powerful without apology.’

Before Million Dollar Baby did $216.8 million at the box office in 2004, American artist Katya Bankowsky introduced Shadow Boxers to the world. The 1999 documentary film on women boxers followed Lucia Rijker as she became the first female world champion fighter, undefeated throughout her career.

Bankowsky, herself a boxer, competed in the first New York Golden Gloves Amateur Boxing Competition for women in 1995. She remembers wanting to box ever since she was a young girl, but the dream was considered “ridiculous.” It wasn’t until she graduated college and moved to New York that Bankowksy learned women were training at the legendary Gleason’s Gym in Brooklyn.

“Boxing is an intense, exciting, and humbling experience. When you agree to spar or have a competitive fight, you are putting yourself in the most vulnerable position in front of an audience. You could end up flat out on your back unconscious or on your knees drooling,” Bankowsky says.

“I wanted to make a movie about a female athlete that was strong and powerful without apology. When I first walked into Gleason’s, I said, ‘This is it.’ They had plastic strips from a cooler at the door—you felt like you were walking into a meat rack. There were all these sweating bodies and everybody training in synchronicity to the bell: three minutes on, one minute off. You heard people yelling, jumping rope, punching bags, and jangling chains—then the bell rang and it was completely silent, just people resting. It was amazing.”

Bankowsky knew this was going to be the beginning of Shadow Boxers, but she didn’t know what was going to happen next, either in the film or in her life. “After the Golden Gloves, I didn’t compete anymore because I didn’t want to put myself at that risk but I love the training,” Bankowsky says.

One day Bankowsky spotted an older lady walking around Gleason’s with a photo album tucked under her arm. The woman stopped to watch her train, then introduced herself as Barbara Buttrick, a British boxer from the 1950s, who was the first woman boxer to have a fight broadcast on national television. Standing at only four-foot-eleven and weighing 98 pounds, Buttrick was as determined then as she was now. In 1989, she founded the Women’s International Boxing Federation in Miami and had amassed an archive of information on women boxers.

Bankowsky searched the archive for the star of her film, the woman she believed would become the champion of the world. She came upon one name: Lucia Rijker, a European kickboxing champion who had retired and moved to Los Angeles to become an actor. Bankowsky reached out, Rijker deferred. Then, two weeks later she called back saying she had signed with boxing promoter Bob Arum. Bankowsky remembers, “Lucia said, ‘I am fighting in Reno in two weeks, so come meet me and we’ll make this movie.’ It was a dream come true.”

In Shadow Boxers, Bankowsky chronicles Rijker’s journey from that first fight in Nevada to her world championship win. The director independently produced the film to ensure creative control and released a trailer to shore up interest in distribution. The co-producers of Boys Don’t Cry offered to take the trailer to the 1999 Toronto Film Festival. Shadow Boxers was accepted and Bankowsky cut the whole film in time to make the festival—where she and Rijker were introduced to Hillary Swank. As fate would have it, Rijker would be hired to train Swank for Million Dollar Baby, and was soon thereafter cast as her nemesis in the film.

But even more serendipitously, while filming Rijker for Shadow Boxers, Bankowsky met Michèle Lamy, an avid boxer who has been training for decades, at Wild Card Boxing Gym in Los Angeles. They instantly hit it off and Lamy went on to arrange a private screening of Shadow Boxers at the Vogue Theatre on Hollywood Boulevard, and an after party at her restaurant, Les Deux Café. “She invited all her Hollywood friends and tried to help get a distributor, but I didn’t get a mainstream distributor because the film was ahead of its time,” Bankowsky says.

They remained close, then lost touch when Lamy returned to Paris, only to reunite during Fashion Week. “It was like long lost friends,” Bankowsky says. “She invited me to the Palais the next day and said, ‘Let’s do a collaboration. Meet me at the boxing gym.’ We went through millions of ideas and I was starting to get frustrated. I said, ‘Michèle, you have so many people covering you; it’s like every angle has already been done. You are mysterious and mystical but nobody has done funny so our videos are going to be funny.’”

It was then that Battle Royale was born—a series of short films that feature Bankowsky and Lamy preparing for a fight that never occurs. Over the years they’ve staged films in Dubai, the Venice Biennale, Overthrow Boxing Gym in New York, and, most recently, on the boardwalk at Orchard Beach in the Bronx as part of the group exhibition On Guard.

“It was tricky because we were not really going to box. We are dressed in our attire and going [to box] but it never quite happens. That became the theme. We would come up with an idea and shoot it the next day. Battle Royale is like boxing in that it is very spontaneous. To excel at sports you have to be in the moment. You have to find the magic of that particular fight,” Bankowsky says.

“Battle Royale engages people to think about beauty, violence, aggression, affection and all those things intertwined in the boxing ring. I always found it interesting that two people who have beaten the living daylights out of each other hug in the center of the ring after the fight. The reason you hug your opponent in the end is they enabled you to push yourself to a degree further than you may have never imagined you could go. You are fighting your own limitations and fears. It’s just like in life.”

On Guard is on view at The Storefront in New York through December 7, 2019. 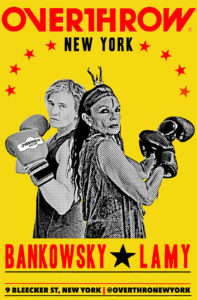 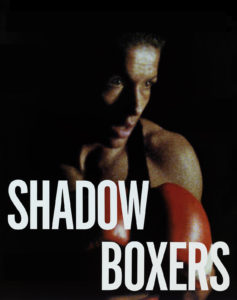 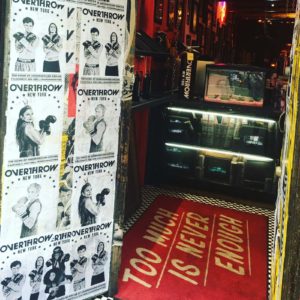 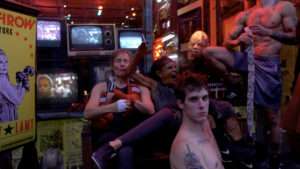 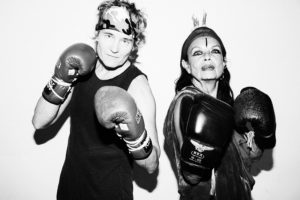 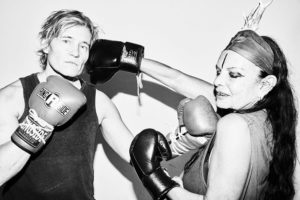 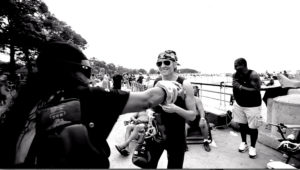 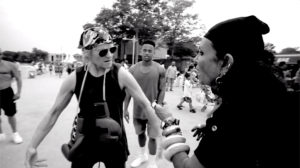 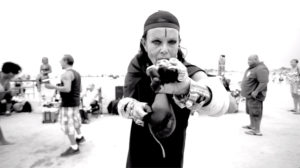 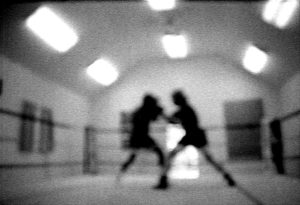 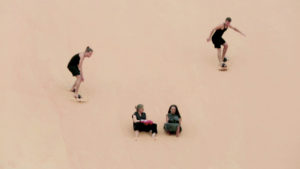