The generation that grew up on ‘High School Musical’ is leading the charge for chill, feel-good nightlife.

A couple of months ago, the Document staff was trying to reminisce on each of our “best nights out in New York.” Oftentimes, the most memorable nights involve rolling from one place to the next, seeing note-worthy people, and complimenting outfits in passing in the restroom. Yet finding one’s “spot” to continually return to with friends can be difficult, almost old-fashioned with the proliferation of ambitious weekly parties, $17 cocktails, and archaic dress codes.

Hank Korsan and Tyrell Hampton seem to have found their space in the NYC nightlife scene. The two are friends with the conglomerate of models, artists, and musicians who form the lower Manhattan weekend scene. Korsan, a 21-year-old DJ who regularly plays clubs and fashion events, insists on approaching his profession as a student. He maintains an air of laid-back assurance and seems content with figuring things out as he goes along. Hampton recently graduated from Parsons and takes on the role of documenting nearly everything. A dancer from Philadelphia, Tyrell’s work ethic traces back to his childhood and approaches life in constant pursuit of joy.

Korsan and Hampton seem to have figured out how to have the best night out in New York, every night. Well aware of how hard it can be to stand out amongst the many artists trying to make it in New York,  Korsan and Hampton stress authenticity and persistence can bring many possibilities. The two sat down with Document at Odessa in the East Village to discuss this past year, influences growing up, and where NYC nightlife might be going in the coming years.

Allie Monck—What has this year been like for you two?

Hank Korsan—It’s actually been super busy, the first year that has been calendar load up. I feel responsible, kind of.

Tyrell Hampton—You have a job, like an adult. I have a Thursday through Sunday.

Allie—Do you know what made that change or do you feel like things just started taking off?

Hank—Yeah, I was just like, ‘Fuck school.’ I went to Fordham for a year. I like school a lot, the act of learning. But I was just coming down here to play every night, go back up there, sleep all day, come back down, go out all night. That made me meet mad people though. Started working a bunch, and then I was like, ‘I don’t need to pay $60,000. I’m not gonna be a businessman.’

Tyrell—Were you going there for music?

Hank—Undecided. I literally showed up the first day, didn’t tour or anything, just showed up. The orientation was in a church. It’s not like I mind it, but then we had to do theology classes and all the core curriculum stuff. I just kind of stopped going. But it worked for the best, again.

Allie—Tyrell, are you glad you went to school or do you feel like it took up four years?

Tyrell—The New School wasn’t my first choice; I was going to go to school for dance. My first choice was The University of the Arts which is down the street from my high school. But then I decided, ‘I need to go to New York, I need to go do what I want to do.’ I went to Lang for film, and then I switched to Parsons.

Hank—Film major, you have to watch a lot of movies and stuff?

Tyrell—It was watching, writing, reading about films. I wanted to make stuff so I switched to Parsons. I had one friend who had just moved here, and she was an IMG model. It was her first season doing shows, and she kept saying ‘Come to this party, come to this.’

Hank—It’s crazy how it works like that. You’re out and you’re sitting next to a 60-year-old and a 16-year-old, and you’re like, ‘How do I figure this out right now?’

Tyrell—People are like ‘I need to go out and network, I need to bring my card.’ Just go out.

Hank—There is such a thing as networking, but we operate in a very different way than a lot of people. We’re out and we have our group of people, and everyone is super cordial.

Allie—How did you start photographing nightlife?

Tyrell—I actually started with video. I made videos on Youtube. They’re still up there.

Hank—Really?! What kind of videos?

Tyrell—I would make like, ‘Hi guys! This is 50 things in my room!’ Music videos, montages, go on trips.

Tyrell—I made that! Going to first day of school, vlogging. When I moved here, I had this camera that my mom bought on QVC, this camera specifically I use to this day. She didn’t use it because she was working. When I went to school I asked if I could take it, I had used it every day for video, and she said yes. But it started out just me going out at night and taking videos of everything.

Hank—It fucks with your head though because you’ll be taking photos, and I’ll be in my little zone. Then at the end of the day I’ll look back and be like, ‘What the fuck? When was that?’

Tyrell—[Laughs] And you never know when I’m gonna post. I could post something from a year ago and everyone looks different or older. I think of it like how everyone uses a Juul now, everyone in the ’90s had a cigarette. All of the photos I have now, our kids are going to be like, ‘What the fuck is a Juul? What’s a cigarette?’

Allie—Were there people in your lives who have inspired you to do what you’re doing now?

Hank—You went to school in Delaware?

Tyrell—I went to high school in Philly. My mom worked in Philly and she drove to Philly every day, it was an hour and a half, two hours depending on traffic. I would go to school, and I’d have dance after school, and then I’d have company after that. I didn’t have that much free time to do anything. I’d just always have my phone.

Hank—It shows because now you love to run around, you’re a maniac.

Tyrell—I’m a kid! I’m a kid at heart. Imagine being in the car all the time, being on your phone. I had Instagram, Twitter, YouTube, I had every app known to man, constantly lurking everybody.

Hank—These are like Odd Future days too, when we were all banging Goblin and shit. This was even before Goblin.

Hank—You don’t think about that when you’re on the East Coast. 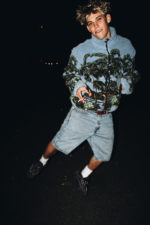 Tyrell—Imagine me, at recess, just dancing, redoing the High School Musical dance moves in the tennis court just fucking it up. And then all of these rednecks are staring at me, ‘What is this kid doing?’ I think by ninth or eighth grade they were like, ‘We know who he is, he’s just gonna be himself.’ This is perfect, I don’t have to explain myself, I’ll just do whatever the fuck I want.

Allie—Hank, were you dancing to High School Musical as a child?

Tyrell—Yeah, how long was your deck?

Hank—I skated, made beats. At the beginning of high school, I was very into sports and stuff. I played soccer. I played like the club thing, but to be real with you once I started smoking weed I was like, ‘Well I’m not going to college for this.’ I put my time into making stuff and just being at home more. My parents had this garage that was their storage unit. I asked for the garage, and it just became this hub for all my friends. It was like That ’70s Show basement but with huge speakers.

Tyrell—I’m thinking of movies where they would just open the door and there’d be a couch there, kid playing video games.

Allie—And you were making beats and just kept at it?

Hank—No, I would go to my friend’s house, and he and his older brother were always playing music. My older brother works in the music industry as well, but they were super house oriented. I saw them play, got my shit, stayed in the garage for a while. My senior year, because all my friends were older than me, they all left. I was like, ‘What the fuck do I do?’ I just locked myself in the garage for a year and studied.

Allie—Has it been difficult to define yourselves and your work? How have you forged your own space in your respective fields?

Tyrell—There are people who aren’t students out there we can fish out.

Hank—Everybody thinks they deserve something right now. Anyone can put your foot in the door, you just have to be able to execute. To do your job well, that takes time studying at home and going out every single night shooting, not just sitting in the crib. To the main question, you have to be content with yourself. We like solitude.

Allie—And what do you do when people doubt you? Especially you, Tyrell, just had that Calvin Klein video come out right? Congrats, it’s really sick. When you do ‘major’ industry stuff do you find you have to rally for yourself in a particular way?

Tyrell—Calvin reached out to me to be an influencer and I was like, ‘This is not what I do.’ I’d rather do something that means something to me. Instead of me posting photos can I get a budget for this? Can I shoot people? Can I do things? They were like, ‘You know what, you’re the only one…’

Hank—Persistence. The only way in NYC to do what you want. Don’t be an asshole about it. There’s a really easy way to do it too that’s cordial and calm. There are so many people that hit me up like, ‘Get me bookings.’ Right there you just started off wrong. ‘Hey I’ve been playing a lot, practicing, if you have any open up, let me know.’ Perfect. That’s what I was doing for two years straight.

Tyrell—There’s more than just going out and doing things. It’s about putting yourself in these situations. You really have to be dedicated to what you do, and if not it makes no sense for you to do it.

Hank—And you’re a recognizable dude. So many people just blend in here. Anyone can introduce themselves; impressions are so big. Fortunately, we’re really good at making impressions.

Allie—Where do you feel ‘going out culture,’ heavy quotes, in New York is going?

Hank—It’s reviving. I think people are less scared. I think about rap music right. 2016, 2017, so much Xanax, so many pills in general. Rapping about designer drugs. People now are seeing that that’s not fun. It’s not fun to go and be bigger-dicking everyone in the club. Everyone wants to dance. Everyone we know at least.

Tyrell—I think that’s my goal with my photos. When I look at my photos, I feel happy, I wish that was me in this moment, smiling, being happy, just having fun. That’s what life is about.

Hank—You have a bunch of kids a room, they want to rage.

Tyrell—I have no idea. My goal when I was six was to make a film. I record everything, which is probably bad, but that’s probably my goal. A real film.

Hank—You should make it in like 10 years of all the shit that’s happening now. That’d be so ill. Those could be references.

Tyrell—Oh god, someone will be like, ‘Let’s recreate the Juul.’ That in galleries. I made little books and zines just for myself, but I think that’s probably the next step. But I think that’s like what Hank was saying, the mysterious thing, so it probably won’t come out for a while. 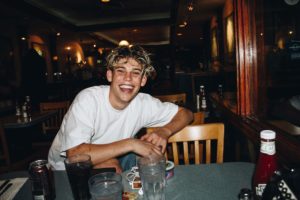 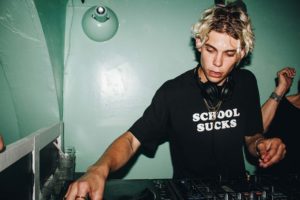 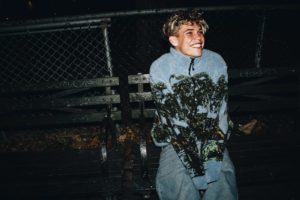 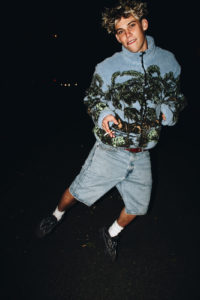 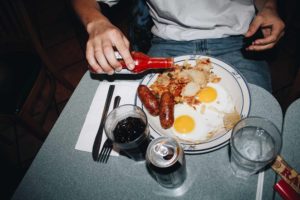 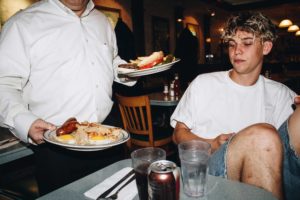 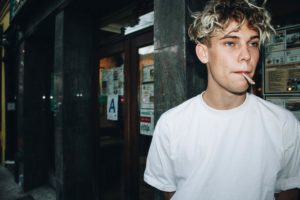