Over the past 50 years, American artist Antoinette “Tony” Sales has traveled through the rarefied world of rock royalty, designing and making stage clothes for icons including Dolly Parton, Johnny Cash, Stephen Tyler, and Exene Cervenka. The mastermind behind Freddie Mercury’s iconic rhinestone fingernail gloves and Nick Lowe’s legendary Riddler suit has always believed that, “Each of us inherently has within us the ability to create the life of our dreams.”

Though shy and demure, the willowy blonde Texan has always been possessed by a fearless streak. “If I wanted to do something, I would,” Tony tells Document Journal from her home in Los Angeles, where she continues to create stage clothes for film, television, and music videos. It was a lesson gleaned as a child when her father, science-fiction writer and US military personnel Keith Laumer received an assignment to move to London in the early 1960s, and brought his family along.

“My older brother, Tom Wright, was Mr. Cool American with real Levis and all the good records. He went to Ealing Tech Art College, where he met Pete Townsend and they became lifelong friends,” Tony says. “Tom had walked into the lunchroom and this real shy guy was sitting alone, strumming his guitar, and all of a sudden, he went, ‘schwaaang!’ Tom said, ‘Oh my God. Do that again!’ Pete has said, ‘If it wasn’t for Tom coming into my life, there would never have been a Who.’” 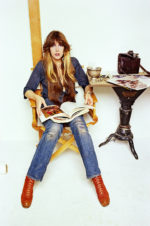 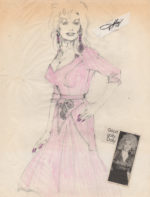 When Tony and her family left London, Wright stayed behind, becoming an integral part of The Who during the band’s formative years. Years later, Tony helped reunite her brother with the band when The Who first came stateside as the opening act for Herman’s Hermits in 1967. “Tom left on the road with The Who and that’s the last we saw of him for a couple of years,” Tony says.

By watching her father and brother, Tony came to understand the power of self-determination. “As a girl growing up in the ‘60s, I didn’t have that much opportunity to dash off and be fabulous, especially since I was an introvert,” she says. “I remember sitting up in bed in the middle of the night, biting my pillow as hard as I could as I realized my destiny was going to pass me by if I didn’t make a move.”

Seizing the day, Tony and a friend decided to move to New York City in 1974 to study tailoring at the Traphagen School of Fashion, which was down the block from Max’s Kansas City. They got their first job after meeting Todd Rundgren’s designer, Nicky Nichols, who hired them to make David Bowie-inspired spacesuits for the band’s upcoming Carnegie Hall show.

“We all stayed at the Gramercy Park Hotel and made costumes going 1,000 miles per hour,” Tony says. “We worked furiously; we didn’t sleep. Nicky gave us speed to stay awake. We started pulling the stuffing out of the couch cushions to make those big shoulders. It was insane. It was two weeks and I remember sitting in the seat at Carnegie Hall and falling asleep while the band played. That was my first, ‘Oh wow, this could happen!’” 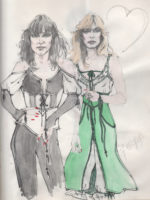 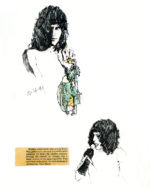 Back in the day, Tony explains, it was easy to meet bands, especially new ones that hadn’t broken into the mainstream yet. She remembers learning a group they had never heard of, named Queen, was coming to town and decided to check them out. After meeting the band, Tony spotted Freddie Mercury sitting alone and approached him. “He was flipping out over the rhinestone fingernail gloves I was wearing, saying, ‘I have to have them! Will you trade me something for them?’” she says.

“They had no money at that point so I traded him my gloves, which were kid leather, and he gave me a beaded belt. Band members Roger Taylor and John Deacon wanted us to make shirts. Later that week, we returned to the hotel to deliver the shirts, but the band had checked out. We later found out Brian May had a drastic illness and they had to cancel the tour.”

Fortunately this did not deter Tony from pursuing her dreams. She moved back to the South, living alternately with her father in Florida and her mother in Texas — where she met the Rolling Stones while hanging out with her brother. She remembers, “I made a vest for Ron Wood and two shirts for Ian McLagan, who paid me with a crisp hundred dollar bill. That was the most money I had ever seen in my life. I started my savings account to get to Los Angeles with that.”

Tony arrived in LA during the summer of 1976, living around the corner from fabled Whiskey-A-Go-Go when the Sunset Strip was sizzling. She stayed for a year meeting and making clothing for bands that she loved before falling love and marrying Stiff Records co-founder Jake Riviera, who whisked her to London in 1977. For her wedding, Tony created a tunic made of wedding lace, which she paired with leggings and flowers in her hair. 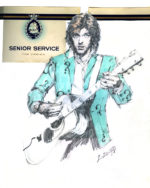 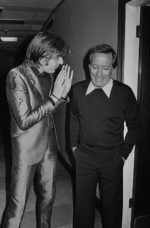 When the marriage ended in 1982, she returned to LA and began collaborating with musician Genny Schorr, a partnership they recently picked up again after a three-decade hiatus. “I have lyrics coming out of my ears,” Tony reveals.

At the Straightjacket store, Tony also met musician Hunt Sales, who played drums on Iggy Pop’s seminal 1977 album Lust for Life and collaborated with David Bowie as part of Tin Machine from 1987 to 1992. Although she was not designing or making stage clothes at this time, Tony was living a fairytale life, falling in love, marrying Sales, becoming a mother, and traveling on tour with Bowie, who carried a picture of her daughter Cali in his wallet.

“David also gave Cali her first art show of her drawings on his dressing room door when she was five years old—it’s crazy because now she is an artist and illustrator,” Tony says. “I don’t think I ever got over my awe of David. I saw the Spiders From Mars show in 1972 in Florida. They played at a dinky venue called Pirates World, which was essentially a roof and a stage. I made my way to the very front of the stage, where I took these snapshots and my world was never the same again. So fun to think that 17 years later, Ziggy Stardust would be babysitting my daughter!” 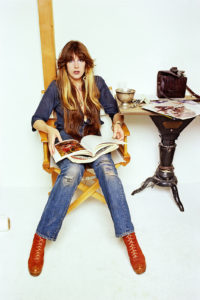 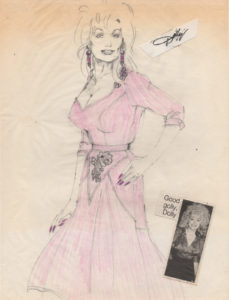 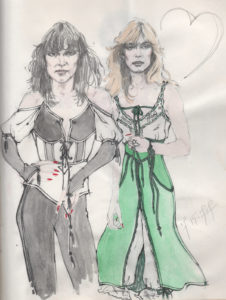 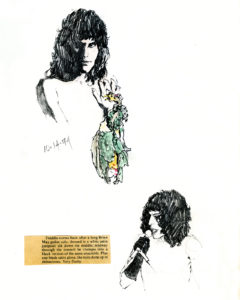 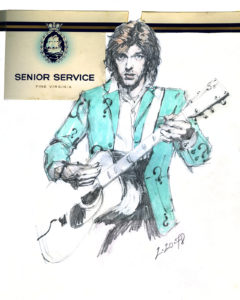 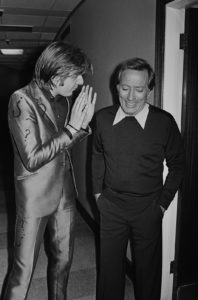