’Once Upon a Time in ’69’ is a fascinating and unsettling commentary on our cultural obsession with violence.

In December 1969, just in time for Christmas, LIFE magazine ran the first big cover story selling Charles Manson as a folk anti-hero. Next to a meticulous crop of Manson’s black-and-white mugshot from April 1968—wild hair, bulging eyes, flared nostrils—read a rather enticing advertisement for the California cult at ‘the dark edge of hippie life.’ In June of the following year, Rolling Stone depicted the serial killer as a Jesus figure gazing wistfully into a globular yellow sun, his eyes streaked with stark white like an anime character on the brink of tears. All this is just to say Quentin Tarantino was hardly the first to see Manson as the focal point of the 1969 Tate-LaBianca murders, and Sharon Tate as a side character in the cult leader’s story.

“Charles Manson was practically glamorized when LIFE and Rolling Stone put his face on their covers in 1970,” says Danny Fuentes, founder of Los Angeles gallery Lethal Amounts, which just wrapped a weekend-long exhibition of Manson Family art and ephemera. Fuentes believes any analysis of the sustained intrigue surrounding the murders “has more to do with figuring out the human psyche” than it does with the specific events of August 1969. But the mainstream media coverage of those events certainly aided Manson—whose greatest wish was simply to be famous—in cementing his place at the helm of pop culture for what has now been 50 years. “Manson has been on just as many magazine covers as Elvis, the Beatles, and Marilyn Monroe,” Fuentes points out.

Charles Manson: Once Upon a Time in ‘69 was effectively a memorial service for the peace-and-love ՚60s dream, cut short at the turn of the decade by a man who forever altered our perception of humankind. The unsettling items on display at the sold-out event in Downtown L.A. included near-illegible scrawled notes, Family photographs, handcrafted wedding rings and THC bead necklaces, and rusted tools from Spahn Ranch, where Manson and his followers lived at the time of the murders. One photo, housed in a crude wooden frame adorned with a single feather, shows Manson in an unbuttoned shirt and fedora, smiling at a large bird perched on his extended arm. (The artwork Manson created in prison reveals a man somewhat less at peace.)

The ephemera was mostly sourced from John Aes-Nihil, an archivist and collector who directed Manson Family Movies. Lethal Amounts also hosted a screening for the 30th anniversary of the cult classic film Charles Manson Superstar, alongside a panel discussion with director Nikolas Schreck and, according to the Facebook event page, an actual, never-before-seen Manson Family member. But despite the slew of true-crime podcasts and films—both cult favorites and Hollywood blockbusters—dedicated to the 1969 murders, it might not be Manson himself who’s the most intriguing figure in this gruesome slice of American history. Rather it’s the community of societal outcasts and prison groupies who carved up their foreheads in a show of solidarity with the (notoriously racist) serial killer.

“His followers were disenchanted kids often times coming from broken homes and dysfunctional upbringings,” says Fuentes. “I don’t think that’s exactly uncommon, and I think that is the fascination. We all can sympathize and look at someone as straying away and going toward the dark side.” He rejects any suggestion of a realistic connection between our current true crime obsession—who are “oftentimes professional people in law enforcement and criminal justice”—and those drawn into Manson’s cult. In fairness, arguments to the contrary are effectively parroting the talking points of those who claim video games cause gun violence, and that the best form of prevention is removing Super Mario Bros from Walmart. Anyone offended by a small-scale gallery’s objective look at the polarizing events should look to how mainstream media continues to iconicize perpetrators of violence every day. “It’s really nothing new; our society focuses on crime and violence instead of preventing it,” Fuentes says. “Perhaps putting Sharon on the cover of Time magazine might have made a difference but that wouldn’t have sold as many magazines.”

The one thing Fuentes learned from assembling this exhibition? “Everything I thought I knew was mostly incorrect,” he concludes. His personal favorite works in the show are Manson’s riddle-filled poems. “The more you peel back the layers, the more you have questions than answers. The case itself is filled with a confusing and not always logical narrative. It’s certainly worthy of the 50 years of people extensively investigating it.” 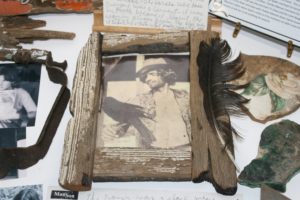