In ‘Offal | East,’ the artist makes the sophisticated look grotesque, and subverts the Eurocentric history of picnics.

One of the starting points for Arden Surdam’s current exhibition at Haven in Montauk was the 2018 Chaïm Soutine exhibition at The Jewish Museum in New York titled Flesh. The Soutine exhibition featured still life paintings that incorporated hanging fowl, beef carcasses, and rayfish within the artist’s compositions. Surdam had been creating her own still lifes, and when she received the feedback that she needed to push the boundaries in her work, she looked at the exhibition for inspiration. “It really blew my mind,” said Surdam, who embarked on a series of works that looked at the cultural hierarchies within the world. Titled Offal | East, referring to organs and entrails being used as food, the series is on view at Haven in Montauk through Labor Day. Surdam had her own experience observing the complicated dynamics of class within the food industry in the Hamptons when she lived there with her then boyfriend, who is a farmer. “It’s a beautiful place,” she said. “It’s a complicated place.” Offal | East highlights five of Surdam’s photographs that feature seafood as subjects, mixed in with objects like photos from cookbooks from the ‘60s and ‘70s, vintage dildos, and picnic blankets. Surdam took Document on a tour of Offal | East, explaining the intent behind her still lifes, the objects within them, and the complex relationship between food and class. 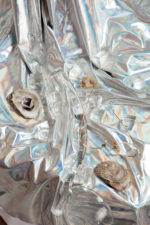 The Buffet
I knew I wanted to do a piece specifically about oysters, and oysters are very licentious—vaginal and sexual…When I was bringing up the Soutine piece, it was because when I was looking at these different backgrounds, and I always use fabrics as my backdrops. It gives it that sense of texturality, fluidity where it feels like it’s wet. For this piece in particular, because I was in Galveston, Texas, which is a barrier island, there are tons of oysters and seafood there to which I had access. There’s a history in painting called Feast of the Gods, where [artists depicted] deities that would gather around and eat oysters, and it was very sensual. That’s something that I was referencing in particular. When I do contemporary takes on still life, I often try to include little moments that are like nods to the viewer if they really step into it. This [glass piece] is a vintage butt plug. This is probably the most sexual piece, which I don’t think most people realize initially.

Fish Descending
I wanted the viewer to understand that still lifes move. When you take an image, especially when you’re using rotting materials, organic materials, it’s really sanitized. They’re grotesque, but it’s not like you’re smelling what I’m smelling in the studio. It’s gross. Also, I’m using these things that are slippery and bloody. I wanted to do a still life where I was actually taking the viewer through the way in which the objects are moving, so there’s congealed pork blood and often it will slip off. I’m really interested in questions of cultural patterning and hierarchies associated with food. For instance, the congealed pork blood is something I got from a Korean market. Oftentimes I’ll upload a photo within a photo, and I’ve been cutting out photos from Time-Life books from the ‘60s and ‘70s about what sophisticated cooking should be. In New York, when you talk about cultural heritage, it’s associated with food. My mother always microwaved bacon, so it was never greasy. What they thought was good food or sophisticated eating was very Eurocentric, it was very French and Italian cuisine. Everyone in these books is depicted as white. I was interested in incorporating that with materials that are not Eurocentric, that are from other parts of the world, and critiquing what we consider delectable and grotesque. 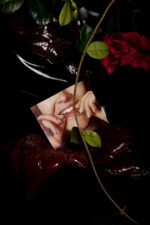 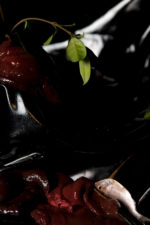 Liver I
This is a photograph from a 1970s cookbook. There was a series of five images [depicting] this woman eating a lobster. It was an example of how you should eat lobster, and I placed it on liver, which was not considered to be part of high cuisine. Now, of course, [it’s] what you’ll find in trendy Brooklyn restaurants. It’s really interesting when chefs start to reincorporate food that was otherwise considered undelecatable at trendy places. I wanted to juxtapose this within the frame. The rose and these branches are things that are found often in traditional still lifes.

Picnic
I knew I wanted to do a picnic-based photo. Picnics [were considered an activity for] the leisure class, so whenever you consider paintings of people at picnics they’re often from a certain aristocratic status. I wanted to try to break that apart. When I was looking for materials to juxtapose with the watermelon, which has deep symbols of race, and the South, I was at the fish market, and I saw this huge octopus, which I thought would be perfect to wrap it around. It also has very sexual undertones like the other pieces. I wanted to give clues to the viewer because a lot of this content is so deeply embedded. The reference to the picnic is the checkered blanket underneath, with these very specific white draperies, which refer a lot to race. The other thing I wanted to do, which goes back to the spatial dynamics, is that I wanted these two watermelon pieces to be outside of the frame, really obscured. [This milky plastic] gives a depth to the image. 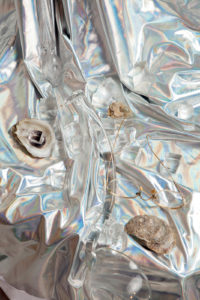 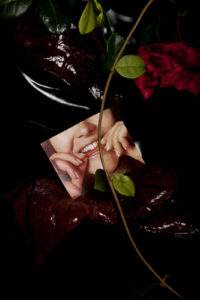 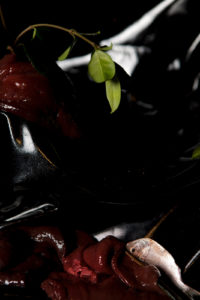 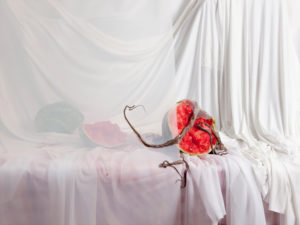