The artist and fashion designer, currently featured besides Alexander McQueen in 'A Queen Within: Adorned Archetypes', on creating joy in the face of tragedy

The pages of Hideki Seo’s diary look like a bit like Russell Crowe’s walls in A Beautiful Mind—a collage of maps, clippings, abstract sketches, intricate line-drawings, and near-inscrutable notes in an array of different languages. The Paris-based Japanese artist works as a fashion designer by day, and in the hours when everyone else is asleep, remains in his studio sketching blueprints for a fantastical new world in which time and space have imploded. Post-human demigods wear garments inspired by those Hideki saw on Innuit mothers while traveling as an undergrad at the Royal Academy of Fine Arts in Antwerp; he saw the women’s traditional enterprise as more powerful than any radical new technology. Another dress is effectively a giant lampshade, strung with fairy lights and festive ornaments. Hideki created the lamp dress after the devastating 2011 earthquake in Japan—it was just days before Paris Fashion Week and he was working around the clock, unable to do anything for his country in the disaster’s immediate aftermath.

Both pieces form part of the latest leg of A Queen Within: Adorned Archetypes, an exploration of female power revealed through seven archetypes, and anchored by an extensive collection of gowns from Alexander McQueen (culled from the vast personal archive of Barrett Barrera Projects, which curates the exhibition as a collaboration with various museums). The exhibition is currently on view through September 2 at the Museum of Pop Culture in Seattle, where Hideki recently traveled to see his creations in their new home. Transatlantic flights and unfamiliar cities appear to animate the artist, who marveled at the work of contributing artists not in attendance—McQueen, Maison Margiela, Vivienne Westwood—before walking us through his own. Here, Hideki tells Document about his fascination with the natural world, channeling the spirit of Shinto, and dancing alone with blaring headphones when no one else is awake.

Hannah Ongley—You were telling me about making one of the wearable sculptures after the 2011 earthquake in Japan to bring happiness to people whose lives had been affected by the disaster. Was this more or less intimidating than creating for a fashion or art audience in Paris? How much do you care about people’s reactions as an artist or designer?

Hideki Seo—I’ve never forgotten the day. March 11, 2011. I was so busy [preparing] for fashion week in Paris, I didn’t even have enough time to see those shocking images from Japan. Actually, I could not do anything for my country, with the distance between Paris and there. I did [make] a small donation, but it was not enough at all. First, there was the earthquake, then the tsunami and the [Fukushima Daiichi] nuclear power station—there was only bad news. One thing I could do was creation. I just wanted to make people smile. That’s why the title of this piece is ‘Switching on even small lights in our too dark heart.’ Honestly, I didn’t think about anything, fashion or art, at that time. 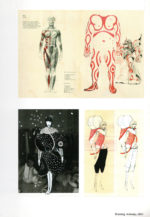 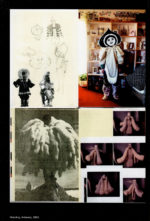 Hannah—And the sculpture you made in 2005 for your graduation show was inspired by the garments worn by Inuit women, who keep their babies inside their clothing to keep them warm. How did you discover this and why did you find it so fascinating?

Hideki—I had traveled a lot, when I was a graphic designer in Japan, because it was fascinating to feel differences of culture. For me, those differences appear on [people’s clothing] very clearly. So I quit my job, and I decided to study fashion at the Royal Academy of Fine Arts in Antwerp. I have also been to the Arctic to research the Inuit garments. In their severe environment, they made beautiful, original, traditional garments which have special space in them to keep their babies. It was a great opportunity to examine their garments. That’s why this collection is called ‘Swimming in the garment.’

Hannah—Are you aware of other cultures, including in your native Japan, that use traditional technologies to create clothing?

Hideki—I’m Japanese [but have been] living in Europe for almost 20 years. Sometimes I wonder about my identity—my mentality is from where? Anyway, for 13 years, I have been living in Paris, which I love because Paris is the capital of garments! There are so many nationalities and cultures as well!

Hannah—How do you balance a fascination with the natural world and a curiosity about newer technologies?

Hideki—Our lives are always changing, everywhere on our beautiful earth, [and so it is too] for animals. I respect the natural world and the newer technologies of our future. So, now, I’m working with 3D printers and fake leather. 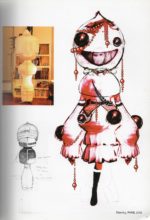 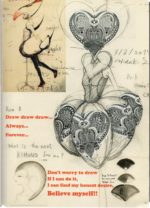 Hannah—You have worked across many different mediums and show your work in many different contexts. If you take a garment out of a museum and put it on a runway model, does it become fashion?

Hannah—Some of your sculpture features faces like cartoon animals, and other creations resemble costumes from fantasy movies. Why is pop culture an exciting form of storytelling? Do you think it is looked down upon in the western fashion and art worlds?

Hideki—Yes, my works are like my daughters. I’m so happy if you say that they are like cartoon animals, imagination! Thanks for your question, it reminds me of the spirit of Shinto. Everything has different gods.

Hannah—Your work is so informed by other people and cultures. What do you like about working alone late at night?

Hideki—I love to create alone late at night. That’s why my last big piece is called ‘Night blooming cereus.’ Actually, sometimes, creation is so hard for me, and I have nervous nights as well. But when it is going very well, all of my adrenaline comes over my body, and it makes me dance while working to loud music from my headphones! These are some of the best moments of my life that never happen to me in the daytime. 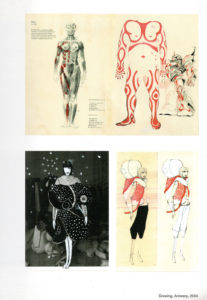 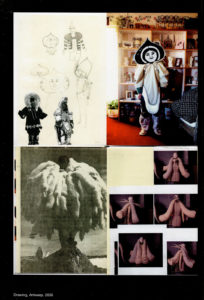 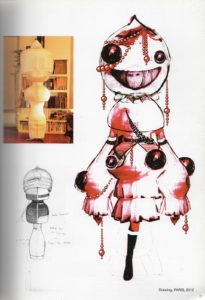 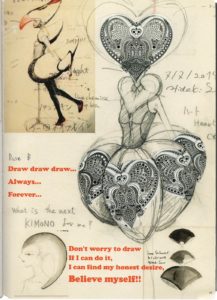