As co-founder and hostess of the fashionable Club Glam, DJ, artist, and downtown social fixture DeSe Escobar aims to make nightlife more sexually inclusive—and more glamorous. Offering a refreshing alternative to the stereotypical club kid aesthetic, DeSe implores New Yorkers to relinquish the streetwear and try something tailored, her own looks spanning feather-trimmed longline blazers and voluminous Vaquera gowns. “New York fashion these days has been a little lazy…” she tells Document. “I think it’s important to bring back personalized looks and fantasy.” For the last week of Pride month, DeSe sheds some light on her mission, her artwork—which recently appeared in the pop-up group art show Daisies in New York—and gives us a tour of her month’s enviable itinerary.

Paige Silveria—What do you have planned for the remainder of Pride?

DeSe Escobar—I’m hosting a lot of events. I’m helping my friend Helen Harris bring attention to a rally on human rights and economic justice for trans and gender non-conforming people on Friday, June 28 from 12–2pm. We’re meeting at 40 E 35th Street and there will be a bunch of speakers. I’m also DJing events—and just participating in a lot of queer nightlife for the remainder of Pride month.

DeSe—[On Tuesday I played] the Visionaire x Milk Makeup party that Linda Evangelista and Steven Klein hosted at PUBLIC ARTS. On Friday, Club Glam is hosting a Pride event and barbeque at 3 Dollar Bill in Brooklyn. Azealia Banks is performing and she might be cooking at the barbecue. Club Glam resident DJ Bebe will be playing.

Paige—When and how did you get so involved in nightlife?

DeSe—About six or seven years ago. I was working in fashion as an assistant designer when I moved here after graduating art school in LA. I did that for a while and decided it wasn’t for me. I began participating in nightlife simply by going out and meeting people—now I consider them family. I didn’t know I’d get so into doing parties. I wanted to fill this gap though, in nightlife. It was sort of separated; straight people had their own parties and gay people had theirs. I wanted to make things bisexual—bring the many crowds together. Glam is now a reflection of this.

Paige—How else would you differentiate Glam from other events?

DeSe—We want people to define their own meaning of the word. We encourage people to put more effort into dressing up. New York fashion these days has been a little lazy. They keep trying to sell us sweatpants and oversized t-shirts. I think it’s important to bring back personalized looks and fantasy.

Paige—You think that really fell off?

DeSe—Yeah, it happened when fashion brands here became a little more saturated and took advantage of this streetwear craze. It’s become less about talent, craft, and tailoring. They made it okay for people to not care so much about the quality and design of their garments.

Paige—So for a Glam party, you’d encourage everyone to dress up and put a lot of thought into their appearance?

DeSe—More importantly, I think it’s a time for people to be more open with their sexuality and then the glam will follow—whatever that means to them. We’re entering a time where people are starting to explore different parts of their sexuality and that makes the social playground more exciting. 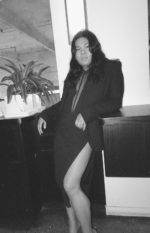 Paige—You think things are improving in that way?

DeSe—Yes. Now that trans people have some visibility and we’re not just being hidden or treated as a sexual experiment. This all goes back to the work I submitted for the Daisies show.

DeSe—Those two pieces were about trans dating—the experience of being trans around cis-gendered people. It’s also about how pop culture helps us to see ourselves as trans people in the arena of everyone else.

Paige—What is that experience and how has it changed?

DeSe—In the past it’s been very difficult to meet people and be openly dating in public. Men often keep dating trans women as a secret. Now that we have more exposure, that’s not so much the issue anymore.

Paige—How was this reflected in the artwork that was in the show?

Paige—Why is the female figure all colored in and the male figure devoid of hue?

DeSe—I was switching the roles. So instead of the trans woman being the subject of more mystery, it was reversed.

Paige—How long have you been focusing on your art practice?

DeSe—I started making drawings back in 2013, then I got into video work and sculpture. Lately I’ve been doing these drawings and framing them in fabric. I did this one piece that was about Miami cruising and framed the drawing with leather. For the sculpture work, for instance, I did these park swings that were assembled moments, like New Years Eve or random summer nights. The video work is inspired by pop culture, glamour, makeup, and YouTube—like documented moments taken from my iPhone.

Paige—How long have you lived in New York for?

DeSe—Nine years. I’ve always been on the Lower East Side. I used to live across the street from Dimes, but before it was Dimes, it was a Malaysian restaurant.

DeSe—I love the convenience; I love being next to SoHo. I love walking around and just being social and in loud environments. I am very social myself. Here, I can go from place to place and link up with whoever—as opposed to someplace that’s very quiet and pretty far out.

Paige—You have so many events and things going on all the time. I couldn’t imagine what it’d be like if you lived far away from it all. Do you think New York is the best place for trans people? What’s your experience with and perspective on other cities?

DeSe—I’m from Los Angeles and there are more and more trans girls transitioning there. Berlin also—Berlin is more eccentric than New York. Those are sort of my three favorite cities for being openly trans and comfortable. I have a residency in Berlin coming up at a space called Fragile in late July. I’m going to do a bigger installment of this piece I did for the MAK Center in Los Angeles a couple of years ago.

Paige—What’s been the highlight this month?

DeSe—My Glam party, Club Whale on the boat. That was, like, the first one.

Paige—Yeah, that looked amazing. And what else do you have coming up?

DeSe—Well, July 12, I’m testing a new venue for Club Glam. We’re taking a break from China Chalet, and we’re going to do a party at this new space called Ampia in the Financial District. Stay tuned! 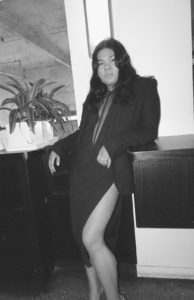