“The genius of the United States is not best or most in its executives or legislatures, nor in its ambassadors or authors or colleges, or churches, or parlors, nor even in its newspapers or inventors, but always most in common people.”

By the middle of the 19th century, the United States was still in its relative infancy and was rapidly approaching a breaking point over conflicting ideals of race, class, and the future of the country. Abraham Lincoln’s election as the 16th president of the United States in 1860 seemed to guarantee the eruption of these growing tensions within the nation, leading to the outbreak of the Civil War just the following year. The United States was in desperate need of a unifying voice which it would luckily soon find in a prolific young man from New York.

A few years before the Civil War, as the United States continued to become more disparate, Walt Whitman, originally from Long Island, was beginning to publish his writing, first with his novel Franklin Evans, then with his lifelong project to construct the now classic Leaves of Grass, an ambitious and massive collection of poems which captured the anxieties and potential beauty in the new American reality. Whitman would have turned 200 this past May, and the Morgan Library & Museum celebrated his birthday with their exhibit, Walt Whitman: Bard of Democracy, which stepped back to analyze the lasting impact of the American poet.

Whitman has become synonymous with the image of his nation; Ezra Pound once wrote that “he is America,” a notion that was true during his own lifetime. Even Ralph Waldo Emerson, arguably the most accredited American writer at his time, wrote that Whitman’s Leaves of Grass was “the most extraordinary piece of wit and wisdom that America has yet contributed.” Surely he could not represent the entirety of his country, but within his writing Whitman was able to corral and reconstruct key ideals of American democracy, actively attempting to reach the common people through his poetry in a way that lacked placation, instead promoting equality and unity. Whitman’s entire ethos was an ode to America. Leaves of Grass was initially published by two immigrants in Brooklyn, where Whitman would reside for the majority of his life. During the Civil War, Whitman felt obliged to help and traveled to Washington D.C. to serve as a caretaker of wounded soldiers. The Civil War was a horrible sight for Whitman; in Old War-Dreams he writes of the soldiers with compassion and empathy: “Long have they pass’d, faces and trenches and fields, / Where through the carnage I moved with a callous composure, or away from the fallen, / Onward I sped at the time–but now of their forms at night, I dream, I dream, I dream.” There’s a hopeful spark within Whitman’s writing that guided these lost soldiers. This love for his country extended beyond trite ideals, instead manifesting itself as a desire to truly represent and support the general population. 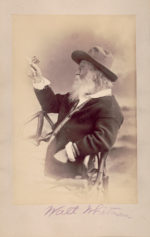 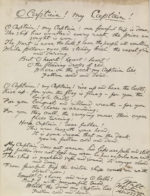 Patriotism is often viewed as a tarnished term in contemporary culture, but even in the time of the Civil War, it often proved to be a sentimental generalization that lacked clarity or criticality. Whitman sought a form of patriotism that was free from expectations and divisive tactics. Perhaps it is through his vulnerability that Whitman was able to reconfigure national pride into a collage of lived individual experiences.He selflessly allowed himself to be seen for exactly what he was, an imperfect man, representative of what it meant to be an American in his time. In part, it was the overt inclusion of homo and heterosexuality in his poems to which he received massive backlash, leading to the banning of Leaves of Grass in much of America, which only increased sales of the book. Whitman was in direct conversation with the population of his country and refused to obscure the messages that needed to be conveyed, no matter the repercussions. It was never in question that Whitman aligned with the people even in the nation’s most fragmented time. He once wrote, “The genius of the United States is not best or most in its executives or legislatures, nor in its ambassadors or authors or colleges, or churches, or parlors, nor even in its newspapers or inventors, but always most in common people.”

It was also his willingness and propensity for change that served and continues to serve as a necessary lesson in the nature of progress. Whitman knew that progress was not about abandoning outdated understandings of the world, but rather an inclusion of new ones. Leaves of Grass exemplifies his pursuit of understanding different perspectives. Initially published in 1855, Whitman continued to add and edit pages of Leaves of Grass until his death in 1891: the final edition released posthumously in 1892. Whitman would agree, too, that his project should not be considered complete.

On what would be Whitman’s 200th birthday, Leaves of Grass continues to stay relevant. We find ourselves not quite on the brink of war, but often feeling like it, as our nation grows more divided, and Whitman’s writing stands as a cathartic reminder in how change is enacted. In Whitman’s seminal poem, Song of Myself, he writes: “Do I contradict myself? / Very well then I contradict myself, / (I am large, I contain multitudes.)” This statement, simple but poignant, portrays the sentiment which Whitman embodied, as well as the potential for what America could be. It’s not the boundaries or labels around groups of people that’s important—it’s an amalgam of stories, experiences, and ideals that inherently drive people together. 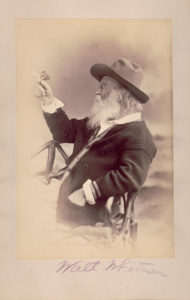 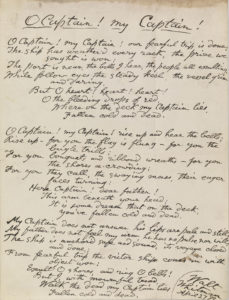