Estonian brand FORMÉS got its start in an EU-funded contest, challenging creatives to collaborate to create a new fashion brand. With hints of irony and humor, FORMÉS draws upon the complicated history of the formerly Soviet-occupied country but always keeps its gaze firmly toward the future.

Alice Lefons—How did the brand start?

Maria Ossipovski—It was thanks to an initiative called Creative Narva which was aimed at bringing together people interested in fashion. I studied fashion business in St. Petersburg, which gave me a background knowledge on how to run a brand, and was keen and open to team up with like-minded people to create something, I wasn’t sure on what yet. I met Oleg, who’s a very creative and passionate stylist and was clear to me that we could embark on this adventure together.

Alice—After studying business, did you want to do something more creative?

Maria—Well, actually my main job is brand design, so I’m constantly thinking about strategies for different brands, this is my day-to-day so I understand how the creative and the business side are tied together. I don’t think design stops in one specific field but branches out, once a designer always a designer.

Alice—What does FORMÉS mean? Where does it come from?

Maria—It’s a French word meaning skilled, shaped. When the team and I first started discussing our vision for the brand, we concluded it all comes down to analyzing the shape on things. We look into the past, of our region for example, and we give a new meaning, shape to these references.

Alice—Talking about this side of your collection, how does Estonia feel today, considering the major transition from USSR to EU, which you also got to experience first person? 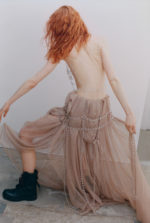 Maria—Well, I feel Estonia was a show-off country within the USSR, so there was a lot more freedom and a lot more commodities than in other regions.The USSR was dissolved in ‘91 and part of Estonia I’m from is on the Russian border, so a big part of the population is Russian speaking, about 97 percent. At that time, there was a period of shortage in goods and we used to be handed out food stamps, people used to join huge queues to collect basic goods. The 90s were a pretty tough time of transition in which Estonia was building itself as a new country.

It’s changed massively since then. A unique situation that’s arisen from this, are the ‘grey passports’ which were handed out to the ‘non citizens’. Grey passport holders don’t have the right to vote, for example. We featured a grey passport on a coat in our collection—not to speculate on the issue but looking at it with irony.

Alice—The Estonian heritage is a big part of the collection, what are the references?

Maria—We have a cardigan which features a hand-embroidered passport stamp which is half Estonian and half Russian. This is because a large part of the population has both an Estonian and a Russian passport which is actually illegal in Estonia. We also used crystals to create earrings and tops. During the USSR goods were produced by Soviet factories so didn’t matter where you were, you would find the same things. Everything was very typical. One of the typical things were these crystal chandeliers which were basically in every house or flat, didn’t matter how small the place was. We also upcycled items with a historical meaning, for example a 90s investigator blazer which we made into a half jacket. We used the same idea for a dress and a skirt which are made out of 90s police shirts. We featured the Estonian Kroone, which was the money used in the country between the USSR and the EU time, on one of the jackets again as an homage to our heritage but also ironically as many people feel nostalgic towards it. Along with these references we also used modern materials like mesh and the use of our logo on straps and belt to keep a sense of modernity as despite looking at our past, without judging it, we definitely want to keep an eye on the future. 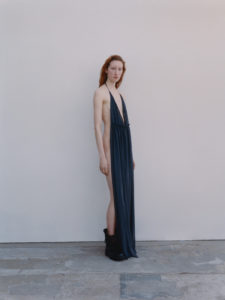 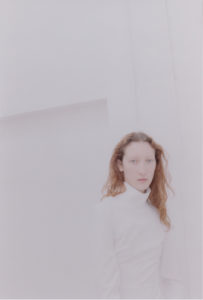 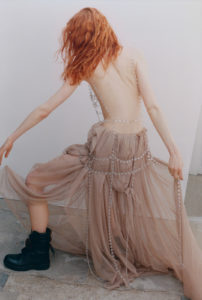 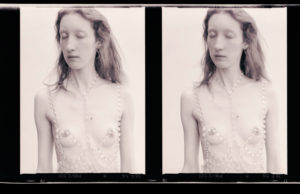 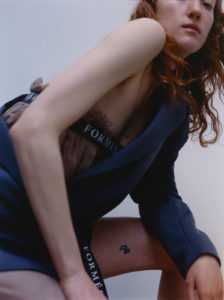 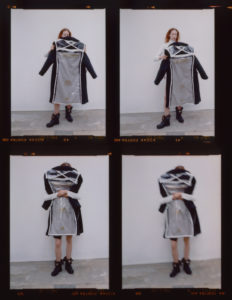 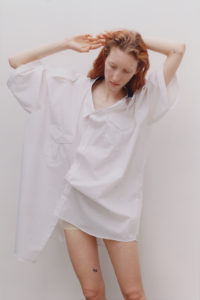 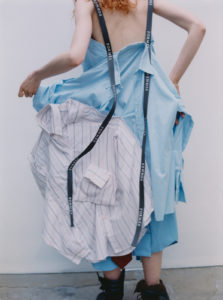 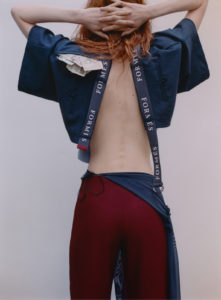 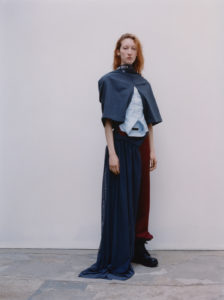 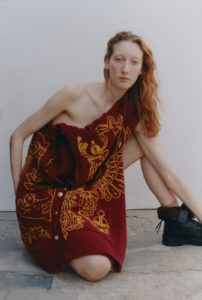