“We have to re-write the blueprint. This is a moment of change.”

Season after season, you can expect its arrival. This year it was a blackface turtleneck and a noose hoodie, last season it was Dolce & Gabbana’s trivialization of Chinese culture, seasons before that their “Slave Sandals.” An apology expressing “sincerest regret” follows. Sufficient time passes before we forget about it—until it happens again.

Is it just sheer ignorance? An innocent mistake? When a company has issued its umpteenth “We didn’t mean to,” it gradually starts feeling like it did. Cultural appropriation, blatant racism, and a lack of diversity and inclusion (in the workplace and on the runway) have long plagued the fashion industry yet continue to persist. We can no longer delude ourselves with the idea that a carefully crafted statement can remedy the tensions created between brands and consumers of color. Nor can brands expect affected groups to keep quiet about it.

Cognizant of the need to not only acknowledge these issues but to rectify them through galvanizing dialogue, the Council of Fashion Designers of America collaborated with Google in New York last week to host the 2nd annual Black Fashion Founders Forum, a conversation about how Black style has revolutionized the fashion industry and how we can better honor Black cultural heritage while simultaneously building stronger and better businesses. Featured panelists were Abrima Erwiah, Co-founder of Studio One Eighty Nine, Stephanie Horton, Chief Strategy Officer at Alexander Wang, and Chrissy Rutherford, Senior Fashion Editor for HarparsBazaar.com. Moderated by Annie Jean Baptiste, the conversation fostered an abundance of rich insight, spanning topics from being the only black person in the workplace to addressing weak diversity efforts put forth by companies.

“It’d be great if brands were doing this preemptively and not waiting until they get in trouble,” said Rutherford. Rutherford amplified this message in recollecting an experience she had with a brand that reached out to her via social media for a potential collaboration. “You have to put your money where your mouth is. You haven’t Instagrammed a POC since last summer, and I find that really concerning.”

But striving to reserve a seat at the table for people of color is only half the effort. Just as concerning as the lack of seats are is the lack of voice that black people are actually allowed once they have been invited. A representative from Tapestry, a luxury fashion company home to Coach and Stuart Weitzman, voiced this concern in asking how brands can be more inclusive after they’ve extended the invitation. In response, Horton emphasized the importance of brands adopting an expansive mindset in their brand-building approach, stressing how decisions ought to include the entirety of the team.

“From the interns to the assistants, use your team effectively. People always think it has to be a grand gesture to make change,” she said. “It can be something like this forum. The more brands open up globally, people will start opening up their mindset.”

This willingness to open up one’s mindset is fundamental for cultures to obtain the reverence they deserve. We often excuse industry professionals for their blunders with the piteous, “They don’t know any better. They’re from a different culture.” The panelists dissected this performance of ignorance, pointing to the ways in which American culture and racial politics differ from those in European countries, but highlighting the international spread of racial indifference and hostility. The conversation took several twists and subtle turns, but Erwiah put the all-encompassing period on things by bringing up Disco Africa, the infamous 2013 fashion Halloween party to which prominent industry figures wore blackface and other mockeries of African culture. “They know better,” she emphasized. “They know what they’re doing.”

The conversation came to a constructive conclusion as it turned inwards, with questions of how people in the Black community can hold itself more accountable in regards to how our culture is exchanged, as well as in demanding our rightful place in all sects of the fashion industry.

“It’s a matter of knowing your worth,” attested Erwiah. “All of our energy doesn’t need to be towards other people validating us. We have to re-write the blueprint. This is a moment of change.” 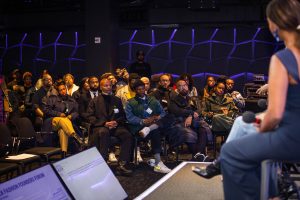 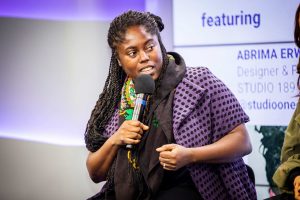