Opening night of Le Palace, March 1, 1978: Grace Jones croons a glittery crowd, swathed in metallic silver drape, singing “La Vie en Rose” atop a blush-hued Harley Davidson. Surrounded by plump, fleshy roses and a mist of dry ice, she heralds the arrival of disco to Paris in a space that would soon come to be known as the city’s answer to Studio 54, luring the likes of Mick Jagger, Andy Warhol, Serge Gainsbourg, Yves Saint Laurent, Anna Piaggi and Jean-Paul Goude.

Fast forward four decades and it is now a different bon ton who line the space, eagerly awaiting Gucci creative director Alessandro Michele’s fair of fantasy for Spring/Summer 2019. This time, it was Jane Birkin on the mic and Dolly Parton painted on the backs of punkish studded jackets. There were turquoise, tinsel-fringed gowns, oversized shades—ideal for skulking incognito in dark corners—liquid fluorescent silks, eye-watering yellow ruffles dripping in gold chains, neon pink feather boas, snakeskin slips with sneakers and shimmering tasseled flares and flamboyantly color-blocked suiting for the boys.

The location acts as the third part in Michele’s homage to France, the Italian house’s new home for fashion month. The first was Gucci’s Pre-Fall/Winter 2018 campaign that drew on the spirit of Paris’s student protests in May 1968; the second, Gucci’s cruise show in Arles earlier this year. The retrofitted, ready-to-wear line-up spoke directly to Le Palace’s diverse, louche past—not discounting more recently, when freshly-appointed Celine creative director Hedi Slimane held his 50th birthday there this summer.

First built in the 17th century as a theatre and dance hall, the 9th arrondissement institution at 8 Rue Faubourg Montmartre was reimagined in the late ‘70s when nightclub magnate Fabrice Emaer—nicknamed “The Prince of the Night,” thanks to his string of exclusive establishments including Le Sept and Le Bronx—gutted the hall’s seating, augmenting the original Art Deco interiors with laser lights and dance music.

Legendary Cuban-born writer DJ Guy Cuevas (who went on to be the artistic director of Paris nightlife establishments Les Bains Douches and Barrio Latino) introduced disco to a crowd of bohemians and fashionistas. A recent auction of Cuevas’s vintage wardrobe at AuctionArt included Yves Saint Laurent, Kenzo, Hermès, Gucci, Louis Vuitton, Pierre Cardin—most of which were gifts from the designers themselves who had frequented Le Palace. Kenzō Takada and Karl Lagerfeld threw couturier balls in the space, and Thierry Mugler designed the crimson tunics with gold Sci-Fi shoulder padding worn by the staff. Prince gave his first concert on French soil there; Bette Midler, Divine and Tom Waits also performed before descending downstairs to party in the private restaurant-club, Le Privilege. 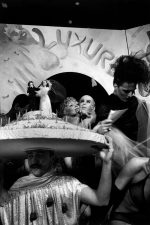 “This is actually a public art, in that it is achieved among the public and not in front of it, and a total art (the old Greek and Wagnerian dream) where scintillation, music and desire unite,” explained semiotician Roland Barthes, in his 1978 review of Le Palace for Vogue Hommes. Here, he describes endless red velvet, aging frescoes and an old stage curtain decorated with vintage ads. Archival footage reveals heaving crowds: designers, models, moguls, actresses, literati, glitterati, mods, club kids, punks, women in suits, men in makeup, white dancing with black, all in a dreamlike array of surrealist costumes. Within its walls, under the laser lights, descending disco balls and dance music, all came together, breaking the social barriers between the “establishment” and the “underground.”

Following the death of impresario and owner Emaer in 1978, Le Palace changed hands ad nauseum and—plagued with drug trafficking charges until it closed for good in 1996— it never managed to achieve the élan it possessed under its founding father. After its closure, it remained occupied by squatters before being purchased and remodelled in 2007 into its current life as a 970-seat theater hall. For now, the closest recreations of the original experience may only be to immerse oneself in Barthes’s recollections:

“Le Palace is not a boîte, a ‘box’, as we French call a nightclub: it collects in an original site pleasures ordinarily dispersed: that of the theatre as an edifice lovingly preserved, the pleasure of what is seen; the excitement of the Modern, the exploration of new visual sensations, due to new technologies; the delight of the dance, the charm of possible meetings. All this combined creates something very old, which is called la Fête and which is quite different from Amusement or Distraction: a whole apparatus of sensations destined to make people happy, for the interval of a night. What is new is this impression of synthesis, of totality, of complexity: I am in a place sufficient unto itself. It is by this supplement that Le Palace is not a simple enterprise but a work, and that those who conceived it may regard themselves with good reason as artists.”

Last night, under Michele’s direction, Le Palace held the new bon ton—the sort of crowd it would attract today, had it remained open under the same auspices of the disco-addled ‘70s. 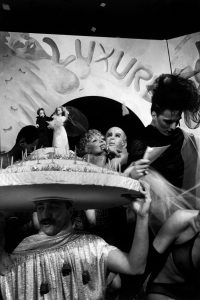