Everyday movements help inform daily life, and often times, people are unaware of their making. Christophe Copin, London minimalist label COS’s new head of menswear, took these movements into account when designing Soma, a capsule collection of menswear that was unveiled on June 13. COS made its Pitti Uomo debut in the courtyard of the Istituto degli Innocenti, located in a 15th-century hospital at the Piazza della Santissima Annunziata in Florence. The London-based label commissioned Wayne McGregor—the choreographer of London’s Royal Ballet, “Harry Potter and the Goblet of Fire,” and videos by the Chemical Brothers and Radiohead—to create a dance performance to present the collection.

The starting point for the collaboration with McGregor came about during Copin’s job interview with COS creative director Karin Gustafsson. Copin had taken the Eurostar train across the channel for the meeting, and he needed to return to Paris in time to watch a performance of the Paris Opera Ballet titled “Tree of Codes” choreographed by McGregor with music by Jamie xx and scenography by artist Olafur Eliasson at the Opéra Bastille. “It was absolutely incredible,” recalled Copin. “I had never seen something like that. I never saw dancers dance the way they danced. It was really absolutely unbelievable.” Copin got the job, and when the COS team was brainstorming on how to present the Soma collection, the first thing that came to mind was McGregor’s choreography. “His artistic vision is something that we admire,” added Gustafsson. 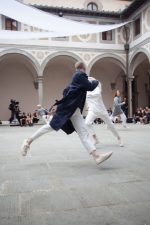 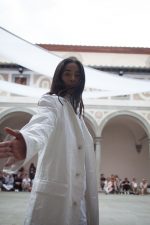 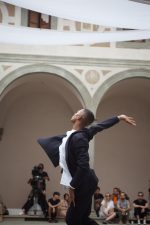 Soma is the Greek term for “The body as distinct from the soul, mind or psyche,” and Copin observed simple movements: “The roll of a sleeve, the way a collar catches at the neck, fabric brushing against skin, fingers tugging at a cuff absentmindedly – gestures which alter how clothes sit on the body.” Copin highlighted COS’s timeless and minimal aesthetic through a number of pieces: a jacket in navy and white with a lab-coat-like silhouette, white trousers, knit turtlenecks in grey and black, and the ever-reliable t-shirt and white collared button-up shirt, reimagined with longer silhouettes. The mission, according to the program, was “to create a seasonless selection of styles that can be worn day-to-day, we focused on these routine movements: the very act of dressing.”

Dancers dressed in COS’s Soma collection entered the courtyard as a composition by Joel Cadbury  The dancers highlighted the functionality of it through a series of movements and gestures that pushed their versatility, twisting, turning, and leaping across the 15th-century courtyard. ‘Soma examines the organic connection and physical fluency between the garment, the everyday movement of the wearer, the elements present the natural environment, and which have inspired and form part of the musical score,” explained McGregor. “My choreography, performed by the dancers, has movement which is both familiar and unfamiliar, light, inventive and playful, but in its essence – simplicity. Soma is of the body, of nature, of being human.” The simple gestures highlighted in the performance and in the Soma collection prove that beauty can be discovered in the seemingly mundane.

The performance is available to watch on cosstores.com. The collection will be available to buy in the COS Florence store at Via della Spada, 1 from 6pm on the 13th of June and then available online internationally on all COS ecommerce sites in Europe, USA and South Korea on the 6th of September. 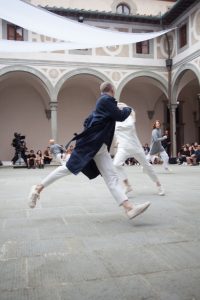 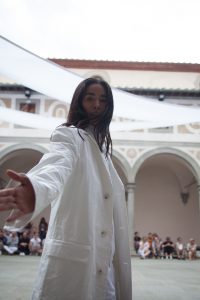 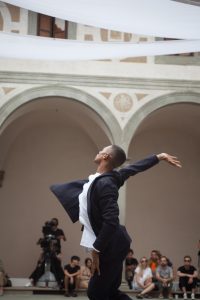