From war paint to Egyptian kohl, the history of cosmetics spans at least 7,000 years and countless cultural variations. In the Classical Greek worldview, cosmetics—derived from the word kosmos—invoked a sense of ordered arrangement, an idea closely related to Greek ideals of morality and beauty. The use of body paint has been linked to ceremonial and religious practices in ancient cultures, with the ornamented body being considered to possess a greater sense of magical potency. Ritual body decoration held great spiritual significance for Aboriginal populations, with specific motifs and patterns being used to reveal social position or channel ancestral spirits.

Today, makeup is all of this and more: an extremely personal ritual that can range from a mode of daily self-expression to a powerful tool in the expression of gender, identity, and sexuality. This is all evident in the fresh, experimental makeup looks created by Sara Tagaloa—a close collaborator of unapologetically queer pop star King Princess (née Mikaela Straus.) A couple of months ago, Tagaloa spent a day in the Hollywood Hills with King Princess and Pose star Mj Rodriguez for a conversation featured in Document No. 15, which you can read HERE. We caught up with Tagaloa about her practice, inspirations, and ongoing collaboration with King Princess, whose debut album Cheap Queen dropped October 25th. 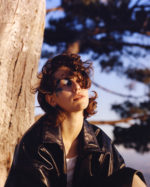 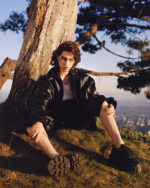 Camille Sojit Pejcha—Can you talk a little bit about your relationship with King Princess?

Sara Tagaloa—I first met King Princess on a cover shoot. She’s super witty and sarcastic, and I loved that she had a really minimal approach to makeup with this over-the-top personality. I’m always surprised that she’ll take a makeup look from very natural to wanting to do a drag look or something really androgynous. I love that kind of an asymmetry.

Camille—Walk me through how you conceptualize a look, and how your relationship to your model effects that.

Sara—I start with a quick study of whoever’s in my chair. I’m big on designing something genuine to their features, something that makes them feel unique; I think a lot of makeup artists have a template that they go with. I’m not interested in that, I want to do something different for every face.

Sara—More responsive to the person, the situation, even how they’re feeling that day. I started in film working with actors and actresses, and I love the idea of makeup being transformative and not just this cosmetic statement.

Camille—It has the power to inspire a whole persona. King Princess has said that some of her greatest performance influences come from drag and ballroom culture; I would be interested to hear how this lineage factors into the looks you create together.

Sara—That’s one of the things I love about her the most—she can throw out ten different people, and maybe we pull an element. I’m always impressed by how vast her influences are.

Camille—I’m interested to hear your thoughts on expressing queer identity through everyday makeup, as well as with more elaborate looks—how she plays both androgynous looks that are really natural, or more femme looks that are totally maximal, which are both important modes of expression.

Sara—Something we really focus on with King Princess’s looks is transparency—a balance of her in her natural skin, paired with things like a big drag eye or an overdrawn lip. But makeup for her can also be a really flushed and sexual look, which is a lot of fun.

Camille—You do a lot of other non-commercial work as well, spanning from body painting to more concept-driven experimental work. How does your creative process differ between them?

Sara—With my concept-driven work I tend to really exhaust my resources when it comes to research. Resources can be anything—things within the art world, to food, to nature. I look at one small thing and then it kind of spins off into a makeup [look], and that can jump into an entire concept. I’ve been really fortunate this past year to dive into some creative directing roles; it’s a lot of work, but I love being able to influence other elements of the shoot outside of just the face or the body. 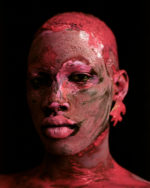 Camille—How does your work as a Beauty Editor at Teeth relates to your own creative practice—how do you balance personal work with career work?

Sara—Working at Teeth has been wonderful—the magazine is really big on transparency and using makeup as a sort of accessory instead of something to conceal. As far as balance, it’s easy to get swept up into the business of commercial and the hustle of making money, keeping up on trends. But I also find that my creative side comes in waves, so I can go in spurts of working on commercial for a couple months and kind of put my creative side in the back of my brain, and then there will come some moments where I feel it coming back to me.

Camille— It’s nice to have a more holistic vision of balance. Creativity might be dormant, but it’s still developing behind the scenes; noticing things in the world, incorporating it into your way of thinking.

Sara—Yeah, exactly! I probably took a good year at one point just doing commercial, and I hit a point that I kind of questioned myself and I was like, ‘Am I not creative anymore?’ And it really wasn’t the case.

Camille—That’s such a universal part of the creative condition. It can be hard to square when creativity has so much to do with the at of making things, so when you don’t make things and are focusing on other areas of development it’s so easy to be like ‘Am I still an artist? Am I still creative? Do I still have the noun if I’m not doing the verb?’

Sara—Especially nowadays with social media, there’s this constant need to be seen and heard. I think it’s also important to have a genuine appreciation for the process of learning. You don’t necessarily have to pick up a book and read through it in order to produce something, you can sit down and enjoy resources just to grow and learn. Maybe in the future that will turn into something, but I think that’s something we’ve kind of lost lately, you know—we are only looking at media and resources for our personal gain and for the future.

Camille—Yes. On that note, I’d also love to hear a little bit about drawing inspiration from disparate sources. What’s the weirdest thing you’ve been inspired by?

Sara—I would probably say fishing lures. There was a time that I became slightly obsessed with tackle shops, and all of the little materials that were available to create lures. From the hair patterns, to the fake objects used to mimic bait. Somehow this obsession launched into a series of oversized eyebrows. Also, slime. I loved experimenting with what the texture of slime does to dramatic makeups. I also really geeked out over metal oxidation, crystalline glazes, and wire sculpture for a while.

I’m also always inspired by painters. I saw a recent exhibition at the broad with Jenny Saville. I could stare at her work for days. She studied in her early career two different plastic surgeries, and I find it so interesting that the highest-grossing female painter has a background like that. I love breaking down how they [artists] got to the finished product, the struggles, the realities, the reaction that follows the result… I will go to different art museums to watch people view the works, and it’s especially interesting to me how people will go to museums just to take a photo of themselves in front of the piece.

Camille—It kind of connects to that idea of incorporating the world around you into your personal brand, instead of just appreciating it on its own terms, as a separate entity. I also notice these [painterly] visual elements in your work, in your use of texture and color. 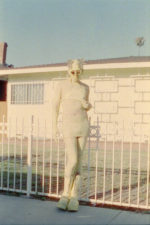 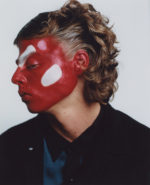 Sara—I’ve always been really inspired by the texture of paint—the drying, the cracking, the heavy layers. I’m always inspired by the deconstruction of makeup as well. I think that’s why I got into experimental work, the need to deconstruct something—the feeling that I just want to be messy. I want to make something beautiful, but not for it to be so small that it’s just on someone’s eyes, or you know, red lipstick.

I just wanted to create something—this might sound very childish—that made me happy and that I had fun with, where I could play and be messy. Something that I could put out there that I didn’t have to explain.

Camille—I want to touch on the idea that people have been painting their bodies and faces for thousands of years; it’s a cultural tradition outside of makeup. But it’s an ephemeral medium like performance art—it can’t go on existing in a museum forever after you’re done. Given the temporary nature of the work, I would be interested to hear about your relationship with photography and other forms of documentation.

Sara—I’m sitting in front of someone for twelve hours; I have so much time to study someone’s face, so to put someone in front of the camera and capture that feels so beautiful.

Sara—It definitely is so personal working with the person in your chair, because you are closer to them than a majority of other people will ever be in their entire life. Other than their partner and their mother, you are in front of their face the most. You are plucking their hair, applying their makeup, and you’re doing all these things at their most vulnerable moment: before they’re about to go on stage, or in front of a camera.

Camille—That’s a lot of trust. What are some unexpected personal makeup rules or boundaries you’ve encountered with clients over the years?

Sara—King Princess never wears concealer under her eyes. That’s something I love so much, because yeah, we get tired sometimes, or have a late night, or fuck it, we just don’t want to cover our faces.

Camille—There’s such a human element to that space, because it’s the most immediate physical record of experiences that are also really intimate—under-eye bags can tell you what kind of night’s sleep you had, if you were crying, what’s going on for you.

Sara—Yeah, you know there have been a couple times when I go up to a friend and they’re like ‘you look tired.’

Camille—So, someone you thought was a friend…

Sara—[Laughs] My immediate reaction is to go freshen up, or like, put on a hat—but the reason I look tired is because I am tired; it’s because I’ve been on a string of late-night jobs or I went out and celebrated with friends.

Camille—Yeah, it’s an evidence of those experiences! You should get credit for the work you do, even if it’s through your under-eye bags.

Sara—Yeah! I’m a big fan of natural differences; it really makes me appreciate how unique we all are. We live our lives and we experience things and they influence how we look over time. Why we would conceal instead of celebrate it is beyond me. Of course, there’s a time and a place for different makeup, but we need to leave someone’s identity still revealed. With King Princess, we don’t use mascara sometimes, but then I’ll negotiate and be like, wait, but let me curl your eyelashes—

Camille—…so we can see that you don’t have mascara.

Camille—All these negotiations, it’s like a game, testing ‘if I change this piece, does it still feel like you? Does it feel interesting?’

Sara—Yeah, sometimes I get to the point of even just cleaning someone’s face and putting a little sheen, not powdering them or anything, and calling it a day. And yeah, you’re gonna see pores on their face. We all have them. 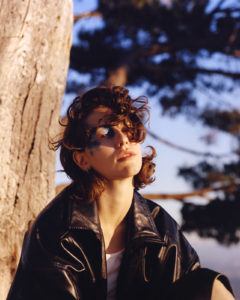 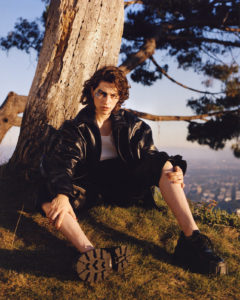 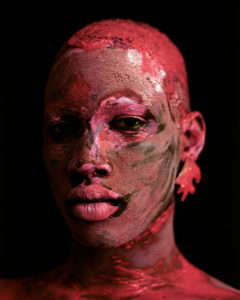 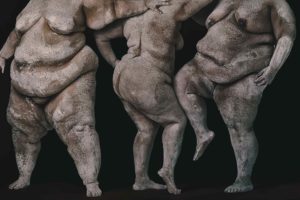 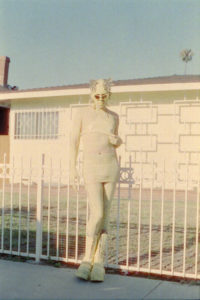 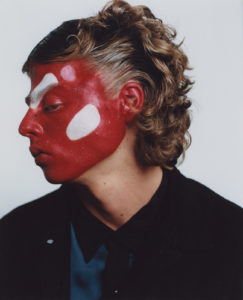