Document traveled to Brooklyn, to pay a visit to artist Dan Colen in his Red Hook studio, ahead of his current exhibition at Gagosian Beverly Hills, High Noon, which is on view through December 15. A trip to the desert was the starting point for the series, which according to Colen, is more about the actual painting than the landscapes depicted in them. Upon closely examining the paintings, the obvious inspiration—the backdrops where Wile E. Coyote would chase the Road Runner—becomes apparent, yet they also project a sort of abstraction within. The Warner Bros. reference and the exhibition’s location in Beverly Hills have an obvious connection to Hollywood and the illusion of grandeur and place that the whole notion of the entertainment industry exudes. Ann Binlot spoke to Colen in his studio about the origin of the series, how his practice has evolved, and the idea of the never-ending chase.

Ann Binlot—So you started this series three years ago?

Dan Colen—I started the series four or five years ago.

Ann—What came first, the series or the exhibition?

Dan—The series. I’ve been working on it for a long time. When I started it, the first few paintings were meant to go to this group show in Marfa in Texas. It was for Ballroom Marfa, but the timing didn’t work out. I curated a show there, so it turned into a different project. For a while I stopped thinking about where, because I understand that it’s been taking so long anyways. But I think LA is a great place for these.

Dan—Yeah, Warner Bros. Hollywood is a really good place for these paintings. The desert, also just landscape in general out there is very nice. Something about the fakeness or the absurdity is like a trick in a way, kind of like backdrops. You know it’s not real, but not just because they looked like backdrops but because of the idea that you really can’t enter them in a way. I like how it connects with LA.

Ann—Why did you choose to reference this cartoon? Did you grow up watching it?

Dan—I did grow up watching it. I’d imagine it was as much a part of my life as it was any of my peers. I don’t remember being obsessed with it, but I think more I kind of just like relating to the character and I guess the process—I mean I love cartoons, I love Tom and Jerry—just that kind of relentless cycling, you know, endless mischievous ambition. I have a warm place in my heart for it. I went on this road trip [around 2003] and took photographs and when I came back I just decided that there were these objects and scenarios that I imagined within the landscape and I decided instead of painting the objects and landscapes to start making sculptures.

Dan— I’m interested in the desert and I’m also interested in the story of Wile E. Coyote. I love how he can’t be defeated, no matter how many times he’s defeated he’s always kind of able to get back on his feet, get a new plan together with the same amount of enthusiasm and the same amount of energy. It’s like pessimism doesn’t even exist for him which is odd somehow.

Dan—I also liked that it’s the same exact place where the story comes to an end is also where he props himself up and begins—in that same exact spot. There’s a little bit also about how my studio practice works—there’s just that chase, I’m kind of chasing something, but what I’m chasing I’m not planning on catching. It’s more just like the process of chasing something, you know? So I really enjoy that, and basically, all the inventions and creativity both in my practice and in the cartoon come in the chase, not in the capture of an idea.

Dan—I know the feeling of failure really well but like I think that just what I’m talking about here is that art is a kind of slippery thing to try and make and I don’t really believe that it has a form, or a wave, or a shape, or a color.

Dan—Yeah, and I hope that this thing in a way is a vessel for art. I don’t know what the art is. I don’t know if art is the paint, or the object, or my belief in it. I’m really kind of fully circling around trying to capture whatever the potency might be. Since I don’t really know what it is, it’s really just an open-end search for what provokes me, and then hopefully what provokes people that visit the studio and what provokes people when they visit the work in the exhibition. It’s a pretty freeform thing, always looking for new ways to touch myself and provoke other people.

Ann—It’s interesting that you bring up failure, because from an outsider’s perspective it seems like you’ve achieved way more success than the regular artist would have liked to achieve.

Dan—I’ve been very fortunate with my opportunities, like the shows and sales and all sorts of things, you know? That’s a great thing, but regardless of that, it doesn’t always mean that that’s how I imagined it or that’s how I wanted it to be. And it’s not necessarily even about that, you know?

Dan—There’s lots of other facets to not just my life but just the world that we live in. There’s so many things that are horrible that are outside of our control. But I do feel very grateful that I’ve had the opportunity that I’ve had with my work and to show it and to get the support that I have for sure 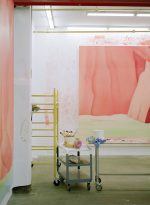 Ann—And why did you chose to remove Wile E. Coyote and the Road Runner from these images and turn them into landscapes.

Dan—I want the audience’s first consideration to be is an abstract experience. I want them to see the material first, I want them to kind of see the landscape second, and then I want them to understand the source—which is the Wile E. Coyote cartoon—third. In a way, the cards are stacked against me how I’ve set it up because the landscapes are so funny because you immediately don’t think of the desert. You think, what is this weird world, because a lot of the cartoon colors are very exaggerated. Then you see the picture and the imagery is pretty straightforward, and I think it goes the opposite way. I tend to carry those out basically to help, at least encourage that a little bit. I think that the landscape tells enough of the story.

Ann—You might get sick of answering this question because I’m sure you’ve heard it like 5 million times. It’s been a decade now since that Warhol’s Children article came out in New York. 10 years on, your group has changed. It’s gone through ups and downs. Looking at yourselves now to then, how have you evolved as an artist? How have your friends evolved?

Dan—Hmm. Maybe I don’t get asked that question enough because I don’t know how to answer it simply. I mean, you know, a lot has changed, I think as it does for anybody. I think that was even more than 10 years ago now. That was in 2006 or seven. I feel like my work has gone through its natural evolution in a way. Just with what we’re talking about with these paintings, I’d say the biggest shift in my creative process or in my relationship with my studio practices is that back then I think I was internally focused, so I’d seek inspiration much more from within and I think my assumption was that the inspiration was inside of me. Or like that this search and chase that we’ve been talking about was an internal thing and that if there was an answer or a goal or a point it was inside of me somehow. I’m much more externally focused now and I’m assuming that if I’m going to get close to the inspiration or to some sort of magic or potency, it’s going to kind of be outside of me. I’ll see it somewhere or I’ll witness it or it’ll pass me by or I’ll bump into it. I think just in terms of what I want the focus to be, what I want the primary active part of these paintings—I want the material to be the thing as opposed to imagery.

Dan—After this, I’m going to kind of like focus more on this performance project. And I have a new body of painting I’ll start. I’m kind of going to shift my attention that. 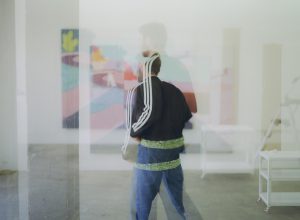 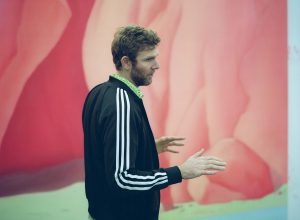 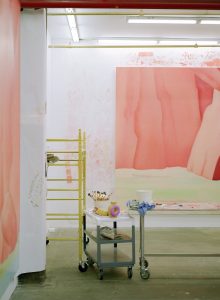