The designer shares his longtime side project with Document.

He may have a reputation for inscrutability, but Hedi Slimane is actually an open book. Hedi Slimane Diary, an online photographic journal which the photographer and designer has been running on his website for a decade, is a 4,400-image-strong record of his preoccupations and obsessions: from modernist architecture to mosh pits; surfers to street fashion; amplifiers to armpits. Glorious beaches and scuzzy nightclubs are recorded with equal style, affection, and clarity, Slimane’s diamond-sharp eye capturing subjects from ephemera—like the pin badges on a speaker—to historical artifacts, like David Bowie’s platform boots. Entirely monochrome, the Diary is wide-ranging in scope, taking in portraiture and still life, but its predominant mode is reportage—a glorious record of Slimane’s movements through youth subcultures, from concerts to clubs to rodeos. None of it is styled—even the portraits—and there’s no post-production. It’s kinetic, deeply personal, and, Slimane says, “very raw.”

Today, of course, it’s de rigueur to leave a trail of images in real time as you progress through the world, but in 2006—pre-Instagram and pre-Tumblr—it was highly unusual. Back then, high-quality photography was created for consumption in print; the digital realm was viewed with suspicion. Hedi Slimane Diary was pioneering in the way it was conceived as a purely web-based project, Slimane recognizing very quickly that images could be put online almost instantly, free of space constraints and the requirements of magazine editors. “There’s something interesting about the immediacy of the posting and the relevance of it being something of this precise moment, that it exists right away,” says Slimane over the phone from Los Angeles, his adopted hometown. When shooting for a monthly magazine, “it’s a drag that it stays in the fridge for three months…it feels very anachronistic.” Fast-moving, exhilarating and frequently updated, the Diary was a breakthrough and liberation, which quickly inspired others to follow suit—Purple magazine and Terry Richardson for two.

Hedi Slimane Diary was also more farsighted in the way it showed how people would come to communicate predominantly in images online, “which, funnily enough, is what social media became after,” says Slimane. “The idea of just reducing it to semiotics—it could be just a still life, a fragment—that’s something that also was taken up afterwards on social media, before it became selfies.” Before then, an online diary had meant text—a blog—but in keeping with his minimalist aesthetics, Slimane decided to strip everything away, including captions. “I wanted it to leave more to the imagination; I didn’t want to give too many keys to it,” he says. “I felt I had to leave it almost as a rhythmic thing, where it’s very silent because the subject is always pretty chaotic.” Instead, the photographs unite Slimane’s twin loves of high formalism and very human messiness—the tumultuous emotions unleashed by music captured and frozen in time. The Diary moves across the decade from London to Los Angeles, but the passion in the pictures doesn’t change. “We had the English period and then California. In a way they have different sensibilities, a different culture, a different time, but for me it’s still the same youth regardless.”

“I used to spend so much time there in the late 80s and early 90s, which was such a great period in New York. I haven’t been spending enough time to really document it for decades, so maybe I’ll do more things in New York.”

Slimane has been taking photographs since childhood; it is still very unusual to see him out and about without a camera in his hand. Hedi Slimane Diary grew naturally out of his books about Berlin youth and the early 2000s indie scene, and then Rock Diary, a project he and I did together, which over three years documented the explosion of young bands in London. Attending gigs with Slimane in ramshackle venues across the capital, I saw his photographic MO up close. He really gets in the thick of the action—if not actually on the stage, then right in the pit, and when he emerges he’s buzzing. The Hedi Slimane Diary is nothing if not a labour of love.

It is also a record of some of the great talents—and beauties—of the age, a testament to keeping one’s eyes open at all times. However riotous the environment, Slimane will somehow zero in on the most elegant and interesting person in the room, instinctively attuned to personal creativity and style. “The idea of finding a subject, a character in a crowd, I’ve been doing for so long that it’s really immediate,” he says. “The sense of grace—you see it in a crowd and I notice them right away.”

Some faces only appear once in the diary, but others become totemic figures to which Slimane returns: people like Pete Doherty, patron saint of the London scene, photographed with his kittens; Christopher Owens, the soulful, defiantly original San Francisco troubadour; Sidney Williams, the archetypal West Coast blonde Slimane discovered at Coachella; and Jonny Pierce from the Drums, the band who effortlessly grafted together British and American indie rock into something insouciant and fresh. Such characters, Slimane says, are the natural figureheads of the kinds of communities he’s documenting and participating in. “Some characters embody an idea and then they lead their community, either artistically or creatively or just in terms of inspiration,” he explains. “Christopher was definitely a key character in the early days of the California period.”

Because the Diary is an evolving piece of work, it can also chart the passage of time and its effects on the people within it. “What I try to do is document them, and then time passes and there’s other things happening in my life, but then I want to go back and keep a record of them, so they might come back in the diary two years after, and a lot of things have happened in their life as well—some of them were emerging and then they became well known, and then that’s very interesting for me in the sense of the community.”

This community dynamic is an important one to Slimane— in many ways, the Diary is an alternative history of youth culture in the 21st century, which draws a lineage from Johnny Rotten of the Sex Pistols and Michael Gira of Swans, to the Garden, the young, captivating, cross-dressing Orange County twins who in some ways summed up the feverishly inventive underground scene revolving around the shop and record label Burger Records. “It’s always a question of who I put into the diary and who I don’t, who are the characters that are belonging to that community and what they represent and how they interact—some projects didn’t go in the diary for that particular reason,” says Slimane. “There is also that sense of long-term consistency. We call it in French communauté élective.”

Such communities ebb and flow, often at the mercy of outside forces like gentrification, but in California Slimane found youth subcultures thriving happily thanks to cheap and abundant space, a remoteness from the rest of the world, and a sense of tradition that allows events like the rodeo to be taken up naturally by the younger generation. “I was coming back from Paris and I ended up right away in those ranches and all those cowboys, and it was such a culture shock—how unaffected they were by contemporary culture,” says Slimane. “What’s fascinating in California is that you have to look for those communities. There are so many incredible subjects, far too many for the Diary, because there’s such a diversity of interests and of fashions, and there’s a sense of quirkiness that I’m interested in too—the idea of pure fantasy that you can only find in places where there’s a sense of isolation, and it creates that artistic oddness.” California has been a source of intense pleasure and inspiration for Slimane, and his home for eight years, but his eye is moving east again. He’s about to become bicoastal, moving into a new home in New York, and is looking forward to exploring the city thoroughly for the first time since the late 90s. “I possibly really will rediscover it,” he says. “I used to spend so much time there in the late 80s and early 90s, which was such a great period in New York. I haven’t been spending enough time to really document it for decades, so maybe I’ll do more things in New York. I don’t see the point in me having a place there if I don’t do anything with it—I have to transform it into something creative. I have a little studio—a portrait studio.”

“The idea of finding a subject, a character in a crowd, I’ve been doing for so long that it’s really immediate,” he says. “The sense of grace—you see it in a crowd and I notice them right away.”

Slimane acknowledges that there is a roughness to the Diary. Like any other journal, it is an immediate sketch, an accretion of images, raw material to be drawn upon for books or exhibitions next year. Unless there’s a big project like this in the offing, Slimane doesn’t look back at the Diary once he’s posted an entry. “I don’t want to correct it, in a way,” he says. “I want it to be unaffected. When I do a museum show, an exhibition, it’s very conscious; it takes forever for me to edit and compose and the principle of the Diary is clearly the contrary.”

Slimane is scrupulous at keeping his images on his own website, where they’re presented as they were intended to be seen, though when there is a new post he alerts viewers from his Twitter feed. He isn’t on Instagram, and if his Diary images are on the site, that’s because they’ve been placed there illicitly.

Hedi Slimane Diary is an extraordinary, evolving record of one man’s life and sensibility, but in a way what it ultimately reveals is how consistent the objects of his affection are—the joy created by coming together with a bunch of likeminded people to dance, listen to music, and form your own scene. The moments are fleeting, but the precision of the images reveals their archetypal nature—the eternal, youthful quest for a sense of belonging, identity and fun.

A diary is an open-ended project, but will Slimane’s come to an end? “Sometimes I’ve thought that I wanted to stop it,” he admits. “When Instagram started, I thought, ‘this is really close to what social media is becoming.’ There was even a moment where I wanted to shut down the entire website—to produce the same amount of work but keep it archived without any public view. The obsession with social media almost provoked the inverse reaction for me, where I think the idea of keeping creative material preserved is maybe an answer. But I still haven’t done that. I’m debating it. I guess now it’s more of a tradition, the Diary. There’s a little community that’s in the Diary that can come there and look at their own pictures. It’s almost a way to keep everyone in contact.” 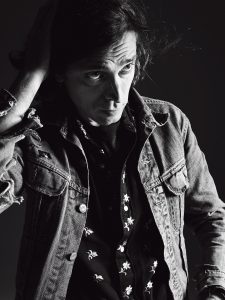